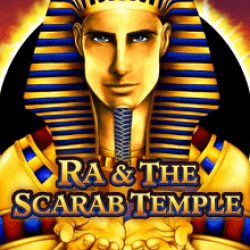 Ra and the Scarab Temple Slot

Ra and the Scarab Temple slot comes to your courtesy of SG, one of the biggest software developers in the business and as you’d expect there is a good range of features here with some nice rewards. It’s by no means as complicated as some of their other games, but it does have a lot going for it and we were excited to give it a go.

The first thing you’ll notice is the design, which features a 5×4 reel but an unfortunately boring looking background that lacks animations or much colour. This is quite disappointing, especially from a company who so often demonstrate the highest quality displays to really draw you in. To start playing the game, you need to spin the reels and try to get a winning combination using the base symbols from left to right. These base symbols are listed as follows, ranked in ascending order based on their value:

It’s worth noting that the Pot of Gold only pays for a winning combination of 3 and is also the Scatter symbol. 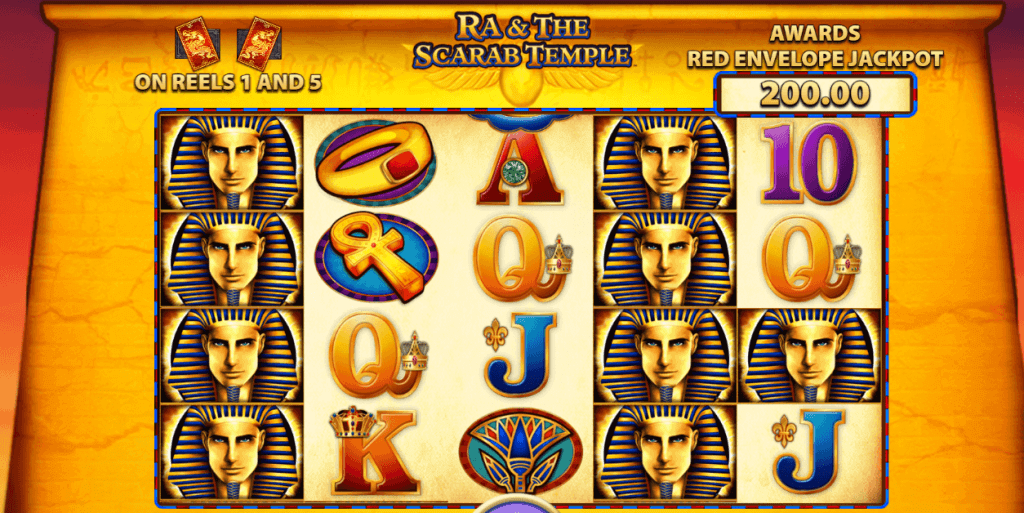 Ra and the Scarab Temple Slot Bonuses and Features

Radiating Wilds Feature. This is initiated when any part of the Obelisk symbol appears in any position on the reels. The symbol itself and any symbol to the left or right of the Obelisk will become Wild. If a Wild symbol replaces the Scatter symbol, then it will become a Wild Scatter (or Wild Bonus) symbol. If a Wild replaced a Red Envelope then that will become a Wild Envelope. Wild symbols substitute for all of the base symbols in the game. Winning combinations are evaluated after all Wild symbols have been placed and the feature will then end.

Free Games Bonus Feature. This is triggered by 3 Scattered Bonus symbols (the Pots of Gold) which appear only on reels 2, 3 and 4. You will initially be awarded 5x the total bet, and can choose one of the following options:

It’s possible to re-trigger the bonus by landing another 3 Scatter symbols which can award 5 additional games on top of the 5x bet. The Mystery Stacked Reels and Radiating Wilds Feature are available during the free spins, but the Red Envelopes are not.

Ra and the Scarab Temple slot is an interesting one from SG. They’ve incorporated quite a few little features here and some are pretty good but nothing really stands out for me and being exceptional. I like how the Jackpot can appear randomly during the base game, but compared to many other games where it’s triggered by a bonus, the reward isn’t that high. The Free Games Bonus Feature is decent as well, and I do like how you have the option to choose how many free spins you want with certain features still active during the free spins, but we’ve seen better. Perhaps I’m being a bit hard here, but for me, Ra and the Scarab slot just isn’t as exciting as I’d like it to be and the recently reviewed Kings Honour slot is certainly a more tempting offer in my mind. Be sure to give it a go though and see what you think.