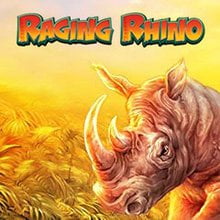 Raging Rhino Slot is WMS Gaming’s 4,096 ways to win video slot that boasts an African wildlife theme focusing around, yes you guessed it, the ‘raging rhino’! You can stampede your way to massive wins as you adventure through the African Savannah and discover what the rhino has in store with every spin. This isn’t your ordinary 5-reel slots game. This game offers 6 reels instead of the norm!

Raging Rhino is one of WMS’s only slots that features a high variance. What does this mean? This simply means that when you win you will win big, but the wins are fewer and far between.  There’s a lot to be offered with this game starting with the great graphics. The graphics were created with in-depth details and superb animations. The second interesting aspect of the game is the betting format. Since it is a slot that doesn’t offer specific paylines it has a minimum amount that can be wagered. The minimum amount is 40p per spin. If you’re feeling a little risky and lucky you can bet higher with the max of £60 a spin or you may bet in your own local currency. 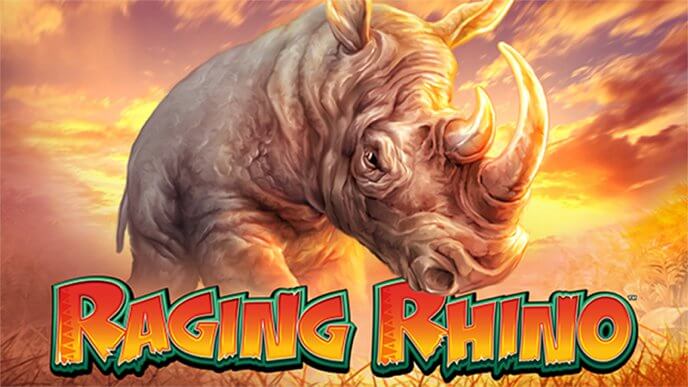 The wild symbols is the Tree Wild. This symbol is an all-important one with it transforming into a multiplier worth 2 or 3x, and will only make its appearance on reels 2 through 6. Offering a wild symbol that acts as a multiple worth up to triple the original amount is nothing short of excellence! This gives slot players the chance to form winning combinations and have the possibility to be rewarded handsomely just for landing some wilds on the screen. Other symbols in the game include the Rhino himself, Gorillas, Alligators, Tigers and all other wild animals you would find in the Savanah. The Rhino can appear on the reels in stacked form. He is the highest paying symbol, and when he makes it to the screen in stacked form get ready for some serious payouts.

Besides the theme the free spins feature is one of the main attractions. You will rage into wins when you spin three or more of the scattered Diamond symbols. Three Diamonds awards 8 free games, four Diamonds gets you in the winner circle with 15 free spins and 50 if you can get a Diamond to appear on each of the reels. During the spins if you spin at least two Diamonds you will retrigger the feature with 5 extra spins. If you can do this a few times you will be set, and almost guaranteed to have a very profitable bonus round. This feature is a guaranteed bonus meaning if you win less than 10x your total wager you will be rewarded with a consolation prize. This is just an added benefit that WMS implemented into some of their games to reassure players they will walk away with something with each and every bonus feature they trigger.

Stampede your way to the winner’s circle playing Raging Rhino Slot! With a jackpot worth 400x your bet and a RTP (return to player) percentage of 95.91%, it’s no wonder the game is creating a great buzz amongst slot players alike in the industry.

Omg, the Raging Rhino slot machine is one of the most basic, but exciting online slots I have played in a long time. It uses an incredible 4096 winning combinations to pay for two or more of a kind African themed winning symbols anywhere in view from left to right. This means that all winning combinations are made up of scattered wins anywhere in view as long as they start from reels one and progress onwards.
I only started playing the Raging Rhino slot after I saw a YouTube video of it being played (Raging Rhino Video), and it looked pretty interesting. The stakes start as low as 40p per spin, and rise up to £40 or so if you are playing at Casumo, which is currently my favourite online casino. Personally I prefer the lower stakes as my money lasts a little longer, but play to your budget and you might end up with a big win.

Choose your stake by clicking on the arrows at the bottom of the screen, then simply click start for the reels to drop in. Unlike most slot machines, the Raging Rhino slot has six reels as opposed to the more common five, so although it’s more difficult to hit six of a kind wins, these will often pay significant amounts of money.

The reel symbols are themed on the African Savanah, with a variety of wild animals making an appearance. The highest value wins are the Raging Rhinos, with clusters of these potentially dropping in to create huge wins. To help you along there are wild symbols on the middle four reels, and although the wilds do not come in clusters, they often help to link clusters of animals separated between reels.

All good slot machines have a free spins bonus, so it’s a good job that the Raging Rhino slot has one. Land three or more diamonds anywhere in view on any of the six reels to trigger the free spins. These free spins auto-play and award the same winning values as the stake the triggered the bonus, however there is a multiplier bonus which can significantly increase your winnings. The multiplier is the wild symbol from the base game, so it acts more as a double bonus, first creating additional wins as a wild, then multiplying those wins by either x2 or x3. It is possible and reasonably common to have several of these wild symbols in a row, this significantly increases the multiplier value resulting in some pretty hefty wins.
The free spins can pay very large values due to the wild multipliers, and to help with increasing your wins the bonus can be re-triggered by landing an additional two diamond symbols anywhere in view. The re-triggers add a further five free spins to your remaining total to help continue your winning streak. At the end of the bonus all of your winnings are totalled up and paid to your bank. If you are unlucky enough not to hit a single win during the Raging Rhino free spins bonus game, the slot comes with a bonus guarantee where a cash prize will be awarded, so although not as exciting, it does prevent zero win bonuses from occurring, which do happen on occasion.

Raging Rhino is a great fun slot with the potential to award large prizes on all stakes, plus an enjoyable free spins bonus round. Slot fans who haven’t played this before will surely love it.