The Rainbow King slot has single and stacked Wilds on all five reels, which just adds to the fun of the slot and also brings big wins every now and then. There are five card symbols in the game and they dominate the reels since there are only a few premium symbols with artwork. There’s the Bag of Cash which is one of two symbols that pay for two-of-a-kind, and there’s the Wild symbols which also pays when you land two of them on your reels. Apart from these two, there are three Scatters, one for each bonus game: Rainbow King Feature, Cash Castle Feature and King Cash Feature. 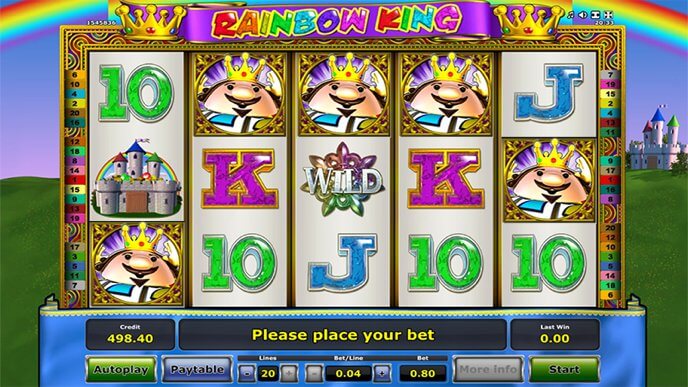 The Rainbow King Feature is triggered by landing at least three Scatters, and if you land more the prizes during the game will increase. This is in fact a board game with 18 steps, and they’ll hold different prizes and bonuses. You can win up to 500x your bet here, and it’s fun to have this kind of board game within a slot machine. This is what the fans of this game are coming back for, no matter if triggering the bonus is rare.

The Cash Castle Feature is a small and typical pick-a-box bonus game where each of the castles on screen will be hiding a cash prize, and you’ll pick one. The smallest prize is 2x and the biggest one is 500x. It’s a small bonus game but it’s a nice addition to the mix and is very similar to the Wishing Well bonus on Rainbow Riches.

The King Cash Feature is the best and rarest bonus game in the Rainbow King slot machine. When you trigger it you’re guaranteed at least a 50x prize, up to 500x, but you’ll have to get a Crown Scatter on reels 2, 3 and 4, so as you can gather, this bonus is rare. You’ll then get to pick one of the 12 Crowns, five of them holding prizes under 100x, four holding prizes under 200x, and three holding top prizes of 200x, 250x and 500x. This is definitely the most rewarding bonus game in the Rainbow King slot machine, and the only drawback is that it ends so quickly, after one click.

Theoretical payout of Astra Games Rainbow King is rather low, at 95.00%. It’s not good enough when stacked up against the most popular slots out there, also a bit worse than the usual online classic slots, but then again it’s much better than what you can get from a land-based slot machine, with the arcade versions of this slot usually having an RTP of 91%. The bonus games provide all the value in this slot, both in terms of profit and in terms of profitability. Players are drawn to these bonus features in Rainbow King and this is the reason why they play the game so much. The payout isn’t too generous, but these bonus games make the experience worth while, and if you trigger them early you’ll likely walk away a big winner!