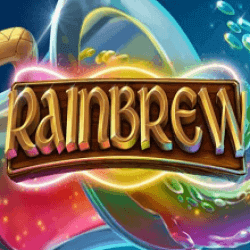 Rainbrew slot by Just For The Win (JFTW) is another leprechaun-themed game only this time, as you will probably notice from when you first play the game, things look and play out a bit different to many of its competitors. The noticeable difference is the top and bottom reel which are actually horizontal and can lead to up to 1125 Ways to Win. I’ll go into more detail on how this all works along with other features shortly.

The actual appearance of the slot is pretty nice, as you can probably guess from the name this is a slot based around brewing drinks and that’s exactly what’s going on. The graphics themselves are pretty nice with some good colours, although the detail isn’t exceptional and we’ve seen better such as with the recently reviewed Penguin City slot which looks absolutely stunning. Of course though, the gameplay is what counts for most people and that’s clearly what JFTW have focused on. To play the game, first you must spin the reels in order to get a winning combination from left to right using the base symbols which can either offer you a cash reward of a bonus feature (see more below). These base symbols are listed as follows, ranked in ascending order based on their value:

Sidewinder Feature. This is certainly a more unique feature that uses the strange design you’ll notice when you start the slot up. A Top Wild symbol will activate the top horizontal reel, while a Bottom Wild symbol activates the bottom horizontal reel. This increases the number of Ways to Win and gives you a chance for additional Wilds. The feature can be activated by either the Wild symbols of the Free Spins symbols but not both.

Rainbrew slot is quite a fascinating game with some nice, original features that certainly help it stand out. The most notable of these of course is the fact that there are 2 horizontal reels at the top and bottom which play into the slot in different ways and can be used to give you a generous 1125 Ways to Win. The Free Spins Bonus is fairly standard and I would have liked to have seen more free spins on offer, especially as only 1 free spin is offered for each additional symbol that appears, a fairly insignificant number. All in all, I like the approach that JFTW have taken here, I just think the slot could be more rewarding but you should certainly check it out, especially if you’re looking for something a bit different.