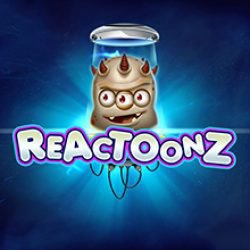 It’s not easy to understand what this Play’n Go slot game is all about just by seeing its title. After all, the Reactoonz slot doesn’t sound like it relates to anything. In actuality, it brings forth a sort of playful, sci-fi, alien type of game, with the Reactoonz themselves being the characters within the reels. It is these characters that are able to provide you with the winning combinations, which you’ll form whenever five or more of them combine in clusters. Therefore, you don’t need to create wins on specific pay lines in the Reactoonz slot. Naturally, being a Play’n Go offering, it comes with high-quality graphics and appealing gameplay alongside. Plus, you’re able to easily choose the kind of bet that you want to bring into play too. This is done by using the various wager amounts that are on display at the bottom of the reels. There, you can choose between values of 60p up to £100 per spin.

The Reactoonz slot doesn’t have a traditional slot layout either. Instead, it incorporates a total of seven reels and seven rows, although they don’t really spin like those found in standard video slots. As mentioned earlier, the game doesn’t incorporate any sort of pay lines either. Instead, you form your wins by bringing five or more of the same symbol into view in a cluster, meaning that as long as they’re next to each other, they form part of the combination. All of the symbols that make up the Reactoonz slot game come in the form of a cute and friendly-looking alien, or Reactoon. Four smaller ones start things off in the respective colours of yellow, green, red and purple, which then leads on to four larger ones, which pay out higher amounts. The highest reward from a standard symbol during base gameplay stands at 5,000 coins.

As spoken of earlier, the Reactoonz slot is a Play’n Go game, so it does feature some very high-quality graphics and gameplay too. 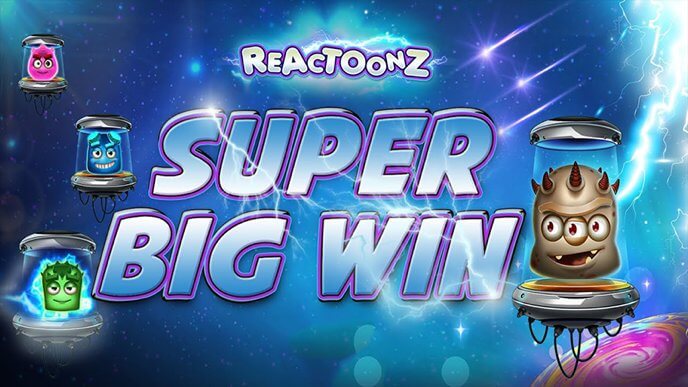 While the base game of this slot is altogether entertaining within itself, it wouldn’t be a Play’n Go offering if it didn’t contain some bonus additions. Fortunately, the Reactoonz slot has exactly that, with several perks coming alongside gameplay. These are:

Giantoonz & Fluctuation: Obviously, the idea behind this slot game is to form wins from five or more standard symbols appearing in clusters. However, if you find that four of the same symbol exist in adjacent positions to each other, they will form a square shape and automatically become Giantoonz. If these complete a winning combination, they will also double the pay-out that you receive for such.

On each spin, one of the one-eyed characters is always marked as something known as a fluctuating symbol. Should any of these marked symbols form part of a winning combination, they will leave two wild symbols behind in their stead. Wild icons will then substitute for all other symbols in order to form additional wins. 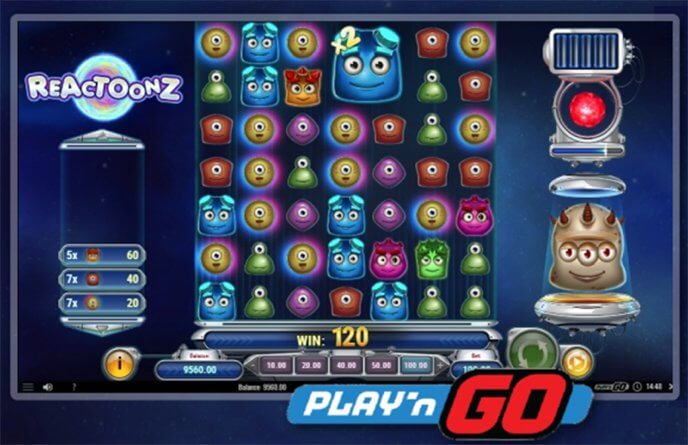 Instability: On any initial non-winning spin, there may come a time when the Gargantoon (the large alien head at the right-hand side of the screen) drops between four and eight wild symbols onto the grid, which is known as the Instability feature.

Gargantoon Quantum Queue: Every win that you form in the game will see the symbols included in such disintegrate and move over to the quantum queue above the Gargantoon. If this queue reaches the Gargantoon, this 3×3 monster will appear as a wild on the reels and substitute for all symbols. He then divides and moves with each cascade after.

Quantum Leap: As stated, when winning, the quantum queue charges up. A random feature will be added to the queue after winning on 25 symbols. Up to four of these features can be queued, while charging for a fifth time activates the above-mentioned Gargantoon feature. The four features that can trigger are: