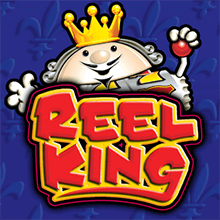 Reel King Potty is a truly unique slot by Novomatic, as it’s a classic slot with fruit machine symbols, three non-progressive jackpots and a huge progressive jackpot, plus it’s a mobile-first design. You don’t get to see this combination too often. This is actually one of the three versions of the Reel King slot Novomatic have released, and is the one with the progressive jackpot. There are other versions, including in the bookies on £500 jackpotsand in land-based casinos with progressive jackpots up to £10,000. This review is for the online casino version.

The Reel King Potty slot actually plays and feels like a fruit machine. The reels spin the way they would in a traditional fruit machine, and there are the standard symbols which you see in these machines; four card symbols, Cherry, Plum, Wild and Bag of Coins. Bets can range from 2 to 200 coins per payline, which means the bets range from 40 to 4,000 coins per spin. The 20 paylines are fixed.

In addition to the symbols, reels can have a yellow background color, and that makes all the difference. If that happens on all five reels, the Reel King feature will be triggered, the Reel King will appear on one or more reels and will keep spinning until a losing spin is achieved, eliminating that slot. It’s possible to be awarded up to five bonus slots, although one or two is the most common. The more slots activated, the higher the win. 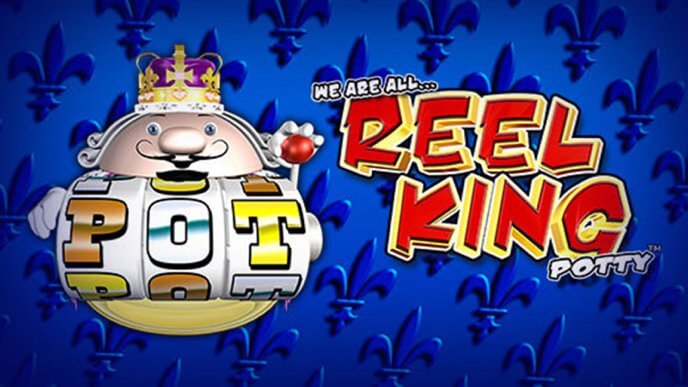 If you get five red reels on the Reel King Potty slot you’re in for a real treat. The Pot King will join your reels and will spin them until Bronze, Silver, Gold or King pot are awarded, and that means you’ll get either one of the three non-progressive jackpots or that huge progressive jackpot! This concept is the same in land-based casinos on the £10,000 jackpot versions of this slot, but not the bookies version which is capped at £500.

There is a third option on Reel King Potty, as the background color of the reel can be part yellow and part red. If you get this on all five reels, you’ll trigger both features at once, with the Reel King Feature being played out first. This is the best thing that can happen in the game, and is also of course, the rarest.

Graphics of the Reel King Potty slot are adequate, it’s what you’d expect from a fruit machine, and there are no animations of any sorts until the bonus is awarded. The Reel King and Pot King add a lot to the game, if you’re lucky enough to see them. However, the reels take a really long time to complete a spin, and most players will want to rush it somehow. There’s no way, as even during the autospin the reels still spin just as long.

The theoretical payout of Reel King Potty by Novomatic is 95.00%, which is low for modern slots but really high for fruit machines and adequate for classic slots (bookies and land-based casinos will have a different RTP). Players who enjoy this type of game will find Reel King Potty rewarding. Of course, this is a progressive jackpot game so it’s normal to have a lower RTP so more money pours into that jackpot. After all, the goal of playing Reel King Potty isn’t to win some small money, though you can do that by all means, but to invest a certain amount into winning that progressive jackpot, and it isn’t a small one either, it can be around 30,000,000 coins!