Robot Energy Conflict slot is a new game from Evoplay, a company who are proud to offer some high-quality, visually appealing games. Their latest slot certainly provides some impressive visuals with great graphics and a cool story to go with it, having robots and even an evil villain all play a part. The robots definitely remind me a lot of Wall-e, or rather Eva, Wall-e’s best friend/girlfriend.

Aside from the looks of the game then, what else do we have? Well the reel layout is simple with a 5×3 grid as usual, coming with 25 paylines and an RTP of 94.5%. I feel like this is a bit low when compared to many others out there, but it’s fairly common for a smaller developer to offer lower RTP’s due to increased costs to them. The most important thing for you to know is to spin the reels to get a winning combination from left to right using the base symbols. These are listed as follows, ranked in ascending order based on their value:

As you can see, this game features a Wild symbol show in the form of a shiny crystal. This Wild symbol, as well as being the joint most valuable symbol in the game, also substitutes for all other symbols in a winning combination apart from the Scatter symbol. It also plays a part in the Free Spins bonus as I’ll discuss now. 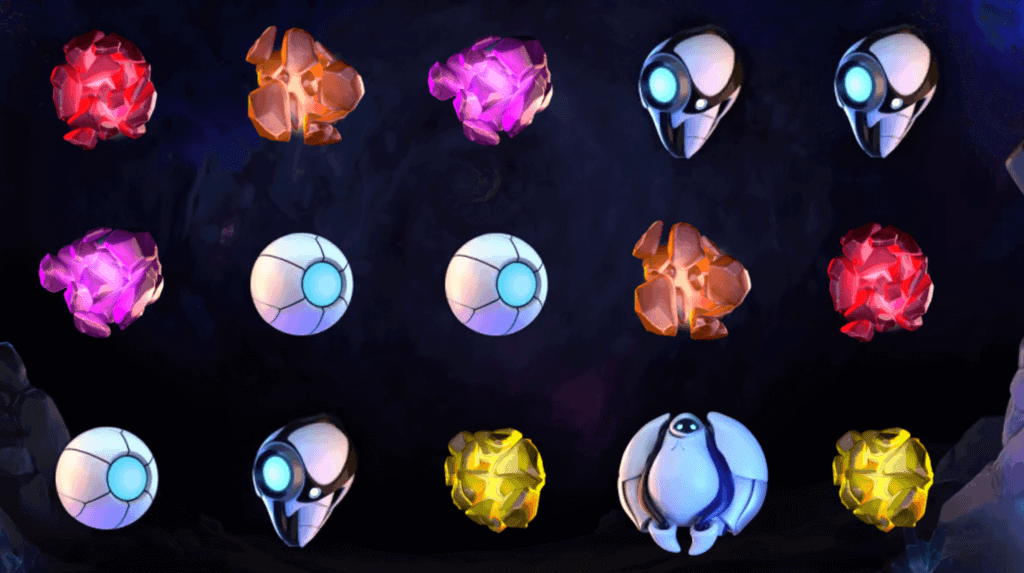 Free Spins Bonus. This is easily the most interesting aspect of the game and sets the slot apart from its competitors. Unlike most slots, Robots Energy Conflict slot has 3 different Scatter symbols each with different properties. They appear only on reel 3, and when they cover the entire reel you will be given 8 free spins to work with. Note that the Scatter symbols do not appear during the free spins. The 3 symbols are as follows:

If 3 Wild symbols appear during this bonus, the robot’s weapon will be recharged so that it can shoot again. This is where some real many can be made, but unfortunately you shouldn’t expect 3 of these symbols to appear very often, and they are very unlikely to appear more than once during a single Free Spins Bonus.

Kain Feature. Kain is an evil creature of some sort who, during the Free Spins Bonus, will try to take over the robots. Any robot taken over will take energy from the symbol for Kain and will stay on the reels until they are released (in other words, symbols will become sticky for a period of time). Energy stones from which all energy has been take will not participate in winning combinations.

Robots Energy Conflict slot by Evoplay is one of those games that focuses a lot on the appearance and theme of the game. Now I have no problem with that as long as the gameplay remains solid and the slot is still valuable. Fortunately, I would say in this case the features are pretty solid and can provide a decent enough payout. The game certainly does look good with impressive graphics but remains relatively simple and unobtrusive. The Free Spins Bonus has a nice concept and with the Wild symbols helping out to provide additional features you can see a nice return from time to time. I certainly wouldn’t put this game up there are one of the most profitable we’ve ever seen, but it’s pretty solid in every department so I’d be happy to recommend giving this one a go.