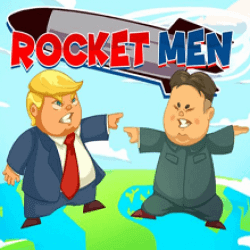 Rocket Men slot is a brand new game from Red Tiger Gaming which, unlike most slots, bases its theme on current politics. Most of you will no doubt be aware of the current conflict between U.S. President Donald Trump and North Korea’s Supreme Leader Kim Jong Un. Their war of, let’s face it, mostly words is constantly on the news and to many seems like a childish game that children might have in the playground. Well, Red Tiger Gaming have portrayed this conflict in exactly that fashion, turning their rivalry into a comical slot. This is certainly an unusual and unique theme, so let’s look into more on how it works and whether it’s actually any good.

Firstly let’s start with the graphics, and you’ll notice that everything in this theme is very cartoon-like, portraying the entire situation in a very light-hearted manner. While the design is actually quite simple, the colours really pop and I have to say I think it works really well. It’s one of the cleanest layouts I’ve seen and it’s quite refreshing when compared to so many other slots that seem rather cluttered such as Slingo Rainbow Riches slot. The music sounds like something of a marching band but in a far less serious tone, and it’s not annoying like some slots are. Moving onto the gameplay itself, here we have a 5×3 layout with just 20 pay lines. Additionally, there’s an RTP of 95.24% with a minimum bet of 20p and a massive maximum bet of £500 for those feeling brave. There are several bonuses as well which I’ll come onto shortly. The aim, of course, is to get a winning combination from left to right using the base symbols which are listed here in ascending order:

The wild symbol is portrayed by 2 nukes, and substitutes for all symbols in a winning combination.

There are five special bonus rounds in Rocket Men slot, each based on either Donald Trump or Kim Jong Un with up to 1000x your original bet up for grabs.

Don’s Driving Range. Based of course on Donald Trump’s love for golf, this is triggered by the Don Scatter symbol if it lands in reel 1 on any wagered spin. Don will then drive golf balls at random places on the reels and wipe out symbols which are then replaced by other symbols hopefully giving you a chance to win some big money.

Kim’s Little Game. This is a simple bonus that’s based on Kim’s love of rockets and firing them just about anywhere he can. It’s triggered by Kim landing on reel 5, after which he will test his missiles by firing them at the reels. Any rockets that hit a symbol on the reels will replace it with a wild, giving you a chance to get more winning combinations.

If both Kim and Don land on the first and 5th reel at the same time, then the showdown begins, with both firing missiles at each other. Who wins will determine the feature.

Boom Time. If Kim wins, this bonus is triggered where you must help Kim choose which rockets to launch to hit the targets with the biggest prizes. Once a missile misses, the bonus is over.

Party Time. If Don wins the battle, you must choose from a selection of girls to collect your prizes.

Nuclear Spins. If the battle between Don and Kim ends in a tie, this bonus is triggered whereby an unlimited number of free spins is awarded while Don and Kim fire Wild rockets at each other across the reels. They move across the reels horizontally at a rate of one reel per spin acting as a wild as they go along. As each rocket hits, the characters health declines and once one character has been defeated the bonus is over. 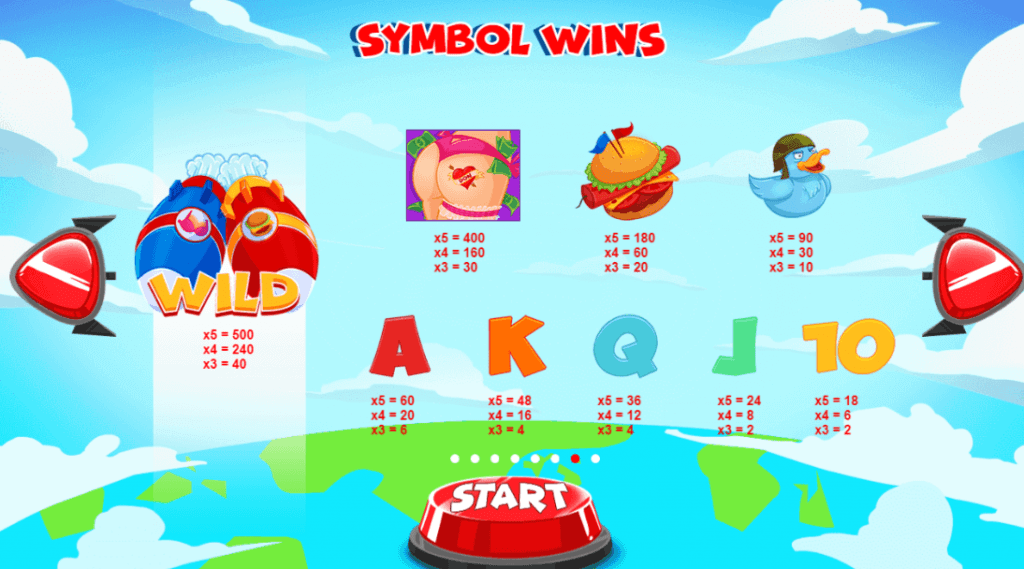 While Rocket Men slot won’t appeal to everyone, especially those who find the political situation incredible serious, for those who can appreciate that this is just a tongue-in-cheek game that’s nothing more than a bit of fun it’s actually a terrific slot. The whole design is very well done and the characters are very funny. The bonuses are excellent, with each being based on a certain aspect on the character upon which they are based such as Trump with his love for golf and of course girls, and Kim with his love for food and rockets. But not only that, they’re actually very rewarding if you’re lucky with 1,000x your stake up for grabs. So if you can appreciate the humour of Rocket Men slot then you’re in for a treat and will almost certainly have a lot of fun playing as well as potentially making some good money.