Safari King slot is brought to you by Pragmatic Play and aims to do one thing. Give you a Bonus with free spins and lots of Wilds, consistently. None of the features are exactly new, but they’ve been put together in a way that has the potential for some pretty nice payouts. Does it make for a slot that’s good enough to try out? Let’s take a closer look.

The theme is certainly one that you’ve seen before. Set in the Safari, you have a wide range of animals like zebras and lions. The graphics are OK, but the design as a whole is fairly average, neither here nor there. You have 5 reels which offer you 50 paylines, and using these you must try and get a winning combination from left to right using the base symbols. These are as follows, ranked in ascending order based on their value:

All of the above symbols in Safari King slot are used to give you a cash reward when in the right combination. However, some other symbols in the game can also help you get a win. The first of these is the Wild symbol, shown as the mighty Lion, a predator to many of the animals mentioned. This symbol will substitute for all other symbols in a winning combination apart from the Bonus symbol, and it appears only on reels 2, 3, 4 and 5. The Bonus symbol is shown as a jewel which appears only on reels 1, 3 and 5. It’s used to trigger the Bonus, of course, and will also pay 4x your total bet when 3 of them appear 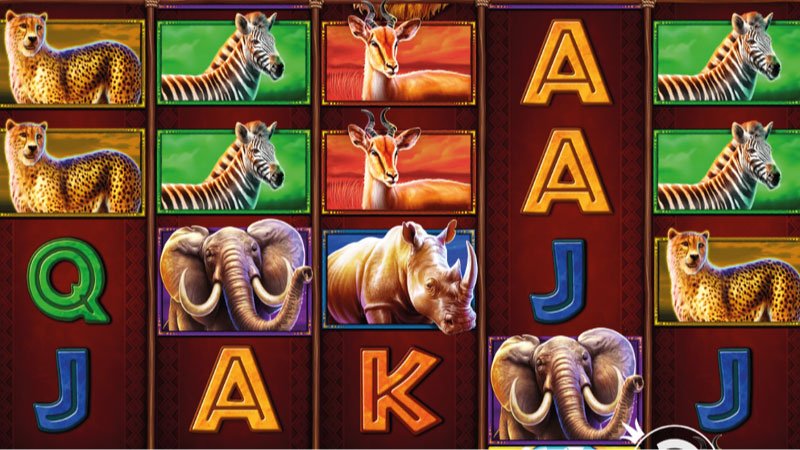 Free Spins Bonus. This is triggered by 3 bonus symbols appearing anywhere on the reels and you’ll be given 8 free spins to start with. Before every spin, including the very first one, a Wild symbol will be added to reels 2, 3, 4 and 5. That’s right, not just one of them but all of them. These will be in random positions mind. The symbols will then remain in position throughout the entire round. During the round, every Bonus symbol that appears will give you an extra free spins, and there are no limits to this so the Bonus could, if you’re lucky, go on for some time. 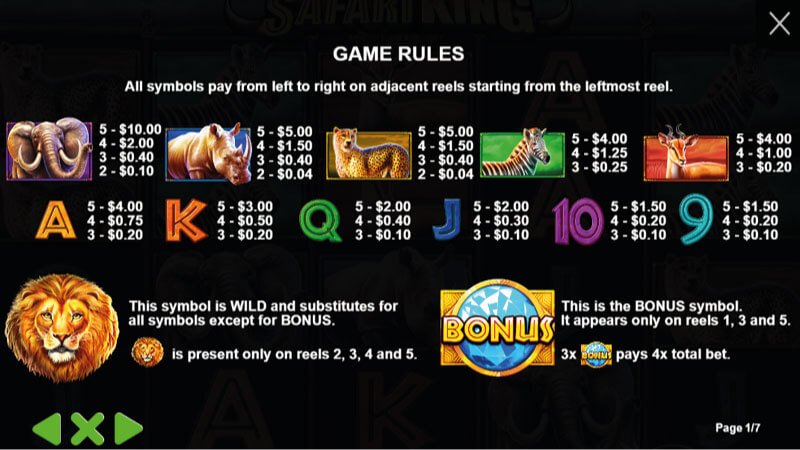 Safari King slot is a very simple game from Pragmatic Play as you can see from the very brief section on the Bonuses. That’s because there’s only one of these, but it’s a pretty good one I have to say. The main appeal here is that on every free spin, more Wild symbols are added and these stick in place for the entire Bonus. Couple all of these Wilds with Elephant symbols and you can see yourself winning some decent payouts up to 1,000x your stake. That’s not a huge amount, especially compared to some of their other slots like Peking Luck slot which offers significantly more, but this Bonus should give you some good wins pretty consistently with all the Wilds in place. I would have liked to have seen the Elephant symbols at least provide more value, and certainly some extra features would have made the game more interesting. As it stands, it’s not a bad game but the maximum payout should be higher and I don’t think many people would play it for too long as there just isn’t enough to make it that interesting. As always, we’d love to here what you think so leave a comment down below and let us know.