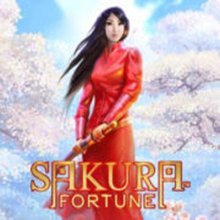 The Sakura Fortune slot is an oriental-themed slot game by Quickspin, released in April 2017. Sakura Fortune is the debut of Quickspin’s innovative new Achievements Engine, which generates tasks for players to complete within the game in return for tokens that can be cashed-in to gain access to the game feature.
The 6 achievements that can be unlocked in the Sakura Fortune slot are #Winning, Scatter Madness, Here We Go Again, Sakura, Coin Collector, and I Love Wilds. Each one of these achievements has 4 levels; bronze, silver, gold, and diamond.

The minimum bet per spin on the Sakura Fortune slot is £0.20 and the maximum is £80. There are 40 compulsory paylines on five reels with four symbols on each, and the symbols are stacked on the reels much like Quickspins other hit slot Leprechaun Hills. There are four low-paying symbols which are cleverly done as Chinese coins instead of the usual card numbers, and they’re not getting in the way visually as they’re quite dull. That’s a good thing, as the five symbols with actual artwork stand out more, and they are Jade Lion, Dragon, Warrior, Empress and the evil Emperor. 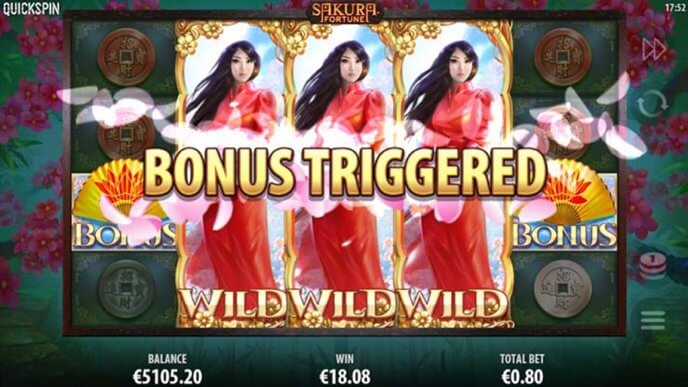 You only get 7 free spins on the Sakura Fortune slot bonus, and they don’t seem too rewarding until you land a Wild symbol somewhere on the reels, because that’s when the Wild expands to cover the reel and you get awarded an extra free spin. Also, the Wild symbol will stay on the reel, so this free spins game is actually a matter of getting as many Wild symbols as possible. By the time the free spins game is finished, you should have some decent cash.
Sakura Fortune Respins is a feature that awards two respins whenever you land two fully stacked Wild symbols on your reels, and if you happen to also land the third Wild, you’ll get three respins. The feature ends when no new Wilds land, and the maximum in the game is three. This feature isn’t too rewarding but adds to the fun of this slot game. Mystery Nudge feature is also fun, as there’s a chance that the Wild symbols will nudge into a full stack every time you land two Wilds on your reels.
Graphics in the Sakura Fortune slot are top notch, all the symbols are nicely drawn in HD resolution, and the animations are adequate, though not spectacular. The best-looking symbol in the game is the Wild symbol and it dominates the theme.

Theoretical return to player (RTP) of Sakura Fortune is 96.61%, which is very high, but the variance of this slot game is also high and that means you’ll need a large bankroll to play this one. Sakura Fortune usually doesn’t pay well and you’ll go negative before you land that big win that justifies the high RTP. The Wild stacked symbol will be responsible for the biggest wins, especially when you land more than one.