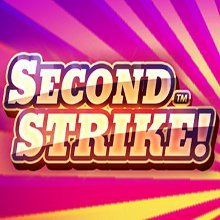 Second Strike is a Quickspin slot game that’s designed to cater to the fruit machine lovers. This is essentially a classic slot game, but with a twist, as every win triggers a potential bonus round where wins will be significantly boosted by adding more symbols to the reels. There are no other bonus features, just that one, and no free spins, multipliers or jackpots either. The biggest win is 100x, when you get five Diamond symbols.

The Second Strike slot machine feature from the title is initiated after every win, and the board surrounding the reels will essentially become a wheel on which one of the tiles will be selected. There are 42 tiles, and 7 symbols will be added for every winning line, so if you have two you’ll get 14 symbols. If the marker stops on the symbol, which isn’t that common, lots of those symbols will be added to the reels and you’ll get a massive win which would be the rough equivalent of free spins win in some other slot game. Most of the time, almost all the tiles will be covered by the symbols and you’ll get some five-of-a-kind wins every time you successfully complete the Second Strike slot machine feature. 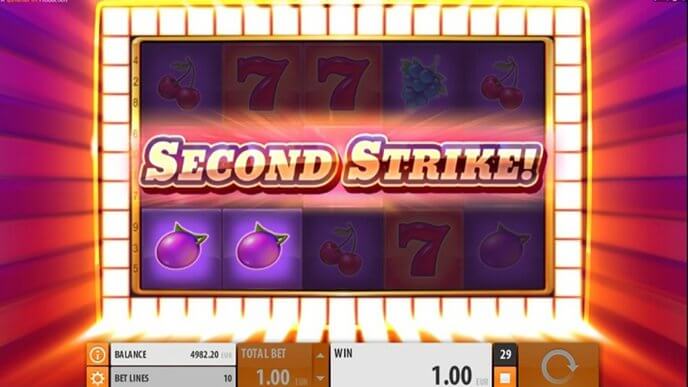 Second Strike has four main symbols in the game that pay the most, they are Diamond, 7, Star and Bell. Watermelon, Grapes, Plum and Cherry complete the set of symbols, and these four only give you your stake back when you land three-of-a-kind so you won’t get rich from the paylines involving these four. But it’s all about triggering the bonus feature, and these will trigger it as well as the other symbols, except the wins will be smaller. There is also a Wild symbol that substitutes for all other symbols.

The graphics on the Second Strike slot are nicely done, at least if you’d compare this one to fruit machines, as it’s obvious the game is more modern. It was released in December 2015 so it features the standard Quickspin mobile design with a big Spin button and easy bet size selection. This is a simple slot game, yet it’s beautiful in its simplicity.

Bets can range from £0.10 to £100 and there are 10 compulsory paylines in this 3×5 slot game. The game features a return to player (RTP) percentage of 96.2%, which is just enough to make this a serious slot game as well as an innovative and fun one, and even the experienced gamblers will enjoy Second Strike. The game may feel a bit boring as it lacks a free spins game or another bonus feature, but the simplicity of Second Strike slot and the frequent occurrence of big wins will be enough to lure a player in. Any player who likes to try out innovative slot games will enjoy this one, but it will appeal the most to fruit machine players and classic slot players.