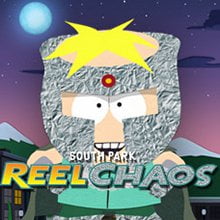 The South Park Reel Chaos slot machine is one of the most enjoyable themed slots of recent times. Join the cast of the hit TV show South Park as they take their super hero form to provide an exciting, high paying, feature packed slot to your mobile, table and laptop, with high resolution graphics and smooth gameplay.
Net Entertainment prides themselves in providing high paying slots, and the South Park Reel Chaos slot machine is no exception. Having a generous return to player of 96.8% and multiple features, you can expect a rewarding and fun game when you play this at your favourite online casino.

Reel Chaos uses twenty winlines crisscrossing five reels, paying for three, four and five of a kind wins from left to right. There are multiple features, including stacked wilds, multipliers, multiplying re-spins, overlay wilds and running bonus spins. These features combined with the base game reel wins make for a high paying game no matter what the stake you choose to play on. 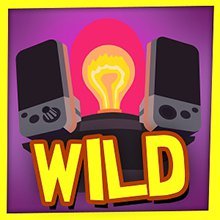 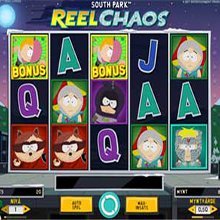 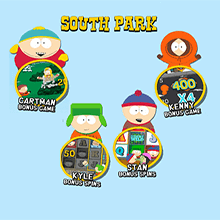 You may choose your stakes from 20p up to £100 per spin (or the equivalent in your local currency), with a maximum win of £50,000 in a single game. Each spin will bring in a series of symbols, including the regular 10, J, Q, K, A, plus the higher paying symbols of the South Park Reel Chaos characters. Any spin during the base game and any of the mini-features may also bring in a wild symbol. This symbol substitutes for everything except the bonus feature symbols. Mini-features are randomly occurring bonus games that are awarded without any specific bonus symbols been in view. A similar concept is used in Genie Jackpots.
Cartman’s Stacked Wilds: This mini-feature doesn’t require any specific symbols to activate. When General Disarray appears at the top of the reels during a spin, Cartman will attempt to capture him, climbing up the reels, creating columns of stacked wilds as he moves. He can create up to three reels of stacked wilds often resulting in very large winning combinations. This feature can appear at any time, during any spin.
Kenny’s Multiplier: Another mini-feature, this time awarding a bet line multiplier. Whilst Kenny and Professor Chaos fight, a multiplier will offer either 3X, 4X or 5X. Not as good as the above feature, but still ok for some wins.
Stan’s Multiplying Re-Spin: If you spin a losing spin, Stan may appear to help you out. He will re-spin the reels to create a winning combination. The reels will keep spinning until a win occurs, with each non-winning spin increasing the multiplier value from a minimum of 2X, up to a maximum of 10X. The 10X multiplier is hard to achieve, but good wins can still be had from this mini-feature.
Kyle’s Overlay Wilds: Little hamsters run across the reels before they are zapped by Kyle. With each hamster zapped, a wild is overlaid on the reels. You may win from three up to five wilds scattered about over the reels. Their position will determine the value of the wins paid.

As well as the mini-features mentioned above, the South Park Reel Chaos slot machine has a fun bonus feature awarded when three bonus symbols land in view. The Mintberry Crunch Epic Bonus Spins feature pits the half man half berry against his South Park foes. For each enemy he defeats, a multiplier will increase. Defeat the final enemy to win an additional cash bonus. Each fighter has a steadily decreasing life bar, much in the same way as traditional fighting game Street Fighter 2 used to have. Your game is over when your health bar reaches zero or you defeat the final enemy.

The South Park Reel Chaos slot machine is an enjoyable, feature rich slot and can be played online at William Hill here.