Spartacus Gladiator of Rome is a slot game by Williams Interactive, and is their second title to feature Colossal Reels, a unique feature of this game developer. Some will like it and some will not, but the Spartacus slot machine is probably the best title with this particular feature. It is themed around Ancient Rome, of course, and the slave gladiator named Spartacus, who is your main character on the reels.

The slot has two sets of reels, the normal one with five reels and four rows for a total of 20 symbols, and the colossal reels; five reels with 12 symbols on each for a total of 60. With every spin, you’ll get 80 new symbols in the Spartacus Gladiator of Rome slot. Symbols are stacked, and there are two main symbols in the game that can cover the entire normal reel and 8 of 12 rows on the colossal reel. There are eight more symbols in the slot, and all of them have similar pays to one another – the better symbols pay 2x more than the weaker ones. This slot is very similar to the highly enjoyable Rainbow Riches Reels of Gold. 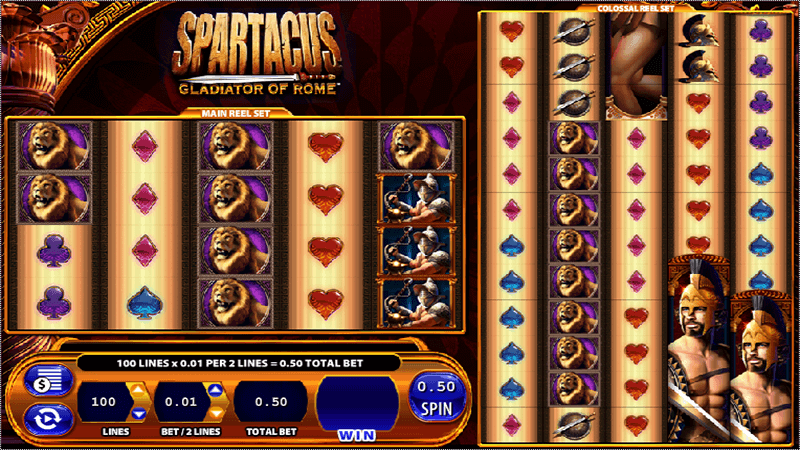 If you land at least three Scatters on both reel sets, you’ll enter the free spins Spartacus bonusgame. For three Scatters you’ll get 8 free spins plus 2x your total bet, for four Scatters you’ll get 12 free spins and 5x bet, and for five Scatters you’ll be rewarded with 20 free spins and 20x your total bet. Scatter appears only on reels 1, 3 and 5 of both reel sets.
When you get a full reel of Wilds on the normal reels during the Spartacus slot machine game play, they’ll transfer to become a full reel of Wilds on the respective colossal reel as well, which is a nice feature that can sometimes be responsible for a big win, though most of the time it will just be fun to watch and it will produce a small winning payline.
You can choose the number of paylines you want to bet on, 20, 40, 60, 80 or all 100. Bet per line can range from £0.01 per two paylines for a total bet of £0.50 to cover all paylines, all the way up to the maximum bet on this slot game which is £250. It takes a while to select the maximum bet, as you can only increase the bet in increments of £0.01.

The game doesn’t seem to pay too often and it doesn’t seem to pay too well. Theoretical return to player percentage stands at 95.94% which isn’t too bad and is far higher than the bookies £500 jackpot version, but the variance is high and the game can go for a long time without delivering a good win. There are just too many combinations possible so the winning combinations don’t come around that often. But of course, once the stacked symbols do line up, you’re in for a major win.
Players will either love or hate the Spartacus Gladiator of Rome slot depending on their feelings about the Colossal Reels feature, and high variance slots in general. In any case, Spartacus Gladiator of Rome is a decent slot game by any standard.