The Starburst slot machine is a great fun game from the incredible video slot designers Net Entertainment. Featuring on the betting terminals in William Hill with £500 jackpots, and in online casinos with jackpots up to £50,000 or the equivalent in your local currency, the Starburst slot machine brings not only high paying reels, but fantastic animations, immersive sounds and great graphics.
First impressions of Starburst are rather deceptive as the slot looks very simple to play, however once you understand the concept of the bonus features you will realise this is far from a mundane slot game. There are exceptional wild symbols that hold in place whilst the rest of the reels spin off for a free spin with increased winnings.

It is worth noting that the online version of the Starburst slot machine has a higher percentage than the bookies. Online you will receive a long term return to player of a very generous 96.1%, on the betting terminals, not only is the jackpot considerably lower, the percentage is also very low, paying around 90% depending on your stake. This lower percentage means you will receive fewer wins and less features in the long term, so if you can, avoid the bookies and play online where possible. 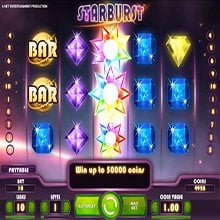 The Starburst slot machine has standard stacked reel gameplay using ten winlines and five reels. The symbols are bright, colourful gems and sevens with bonus wilds on reels two, three and four. There are no actual features, however the wilds and bonus respins act as a bonus game and can result in very large additional wins.
If a wild symbol lands in view on any of the centre three reels, it will expand to fill the entire reel, pay any wins then award a free respin whilst holding in place, which again may create additional winning combinations. If another wild lands in view, both wilds will expand and hold in place, offering a further free respin. This may happen one last time, with the possibility of all three centre reels been complete wilds then holding in place to pay even more wins. You can imagine the end result would be a massive win, and if you were playing in the bookies it would likely be the jackpot or very close to it.
Aside from this mini bonus feature, the base game is standard and pays frequent wins even when played on a low stake. The animation on the large wins looks very good even by Net Ent standards which are always very high.

The Starburst slot machine is available to play in William Hill bookies and online at BGO Casino. New players will often be given free spins which can be used on Starburst, but this is subject to change to another featured slot from time to time. Play online here.