Strolling Staxx: Cubic Fruits slot is an attempt from Netent to try and show that you don’t need to use free spins to make a slot popular. It has been done before and we’ve reviewed slots that we’ve thoroughly enjoyed that don’t have or need free spins like Ark of Mystery slot, but have they done that here?

Strolling Staxx: Cubic Fruits slot looks brilliant. That’s the first and most noticeable thing about it. The graphics are gorgeous, the colours wonderful vibrant and the setting very calm and soothing. It’s quite honestly one of the best looking slots we’ve ever seen and I hope to see more like it. It’s much like a video game from Nintendo or something that it works great. Of course, gameplay is pretty important too! You’ll see there are just 5 reels with 3 rows, offering a total of just 10 paylines. On these you’ll need to get a winning combination from left to right using the base symbols in the game. These are as follows, ranked in ascending order based on their value:

In addition to the symbols I’ve just mentioned, there’s also a Wild symbol shown simply as a W. Of course, it will substitute for all other symbols in a winning combination but also provides the same value as the Watermelon symbol on its own. Furthermore, it’s available on all the reels in any position during both the base game and the Strolling Staxx respins. It can also appear as stacks or Colossal symbols. 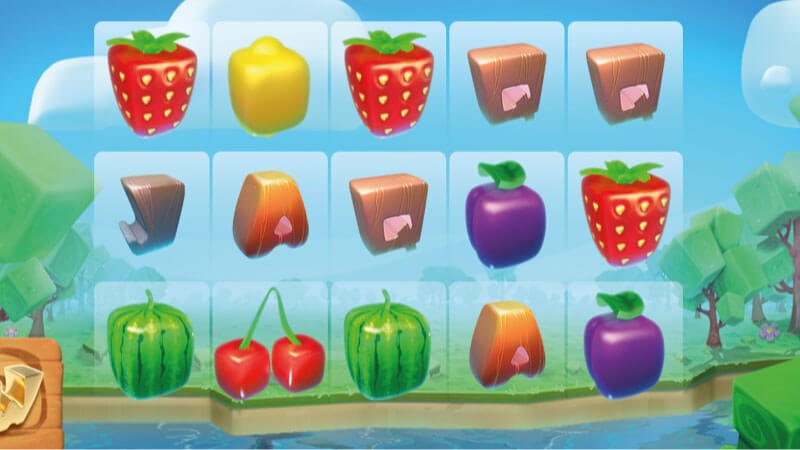 Strolling Staxx Respins Feature. Taking its name from the title of the game, this feature is triggered whenever a reel is covered by a fully stacked symbol, whatever that may be. This means that a reel must be fully covered by a single symbol. When this happens, all the symbols in the stack and any symbols connected to them that are the same (so if it’s the Lemon symbol than a Lemon symbol next to the stacked reel is included) will move one reel left and respin, continuing to do so until all of the stacks disappear. You can also retrigger the feature by landing another stack of symbols during the respins, either of the same type or a different type.

Colossal Symbols. We’ve seen features like this many times before whereby symbols can appear as either 2×2 or even 3×3 symbols giving you a good chance of getting a win when they do. A 3×3 symbol on a grid this size is very likely to give you a pretty good payout. Unfortunately, it doesn’t really do much like trigger other features or give you free spins, but it’s a nice little touch I suppose and it’s good to see that the Wild symbol can also by colossal.

Bonus Bet & Extra Chance. Interestingly, you have the option to activate Bonus Bet whereby you pay more per spin but in return, the Extra Chance feature can be activated. This happens when Strolling Staxx Respins are activated not by landing a 3×3 colossal symbol, and during it overlay 3×3 colossal symbols can land fully or partially on the reels. 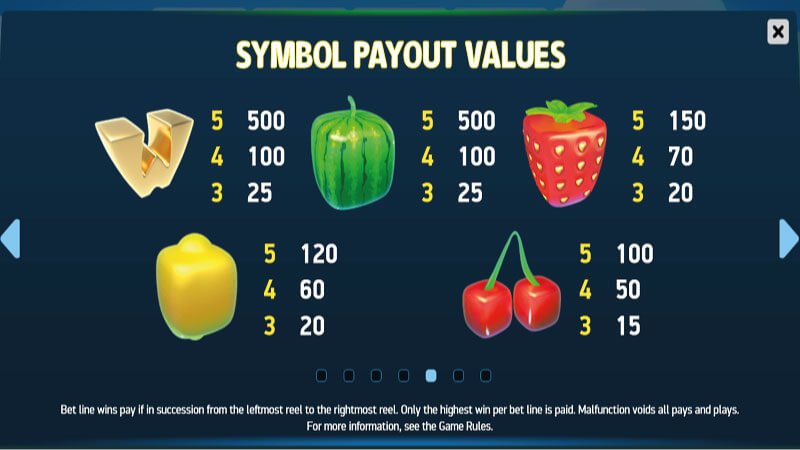 Strolling Staxx: Cubic Fruits slot from Netent might seem like a crazy idea. After all, what kind of slot doesn’t have free spins?! Well, we have seen some slots do well without them and I don’t think they’re essential at all, it’s nice to see something a bit different. That being said, I’m not sure Netent have done quite enough to make me think that’s the case here. The respins feature is a pretty good one and I like the way that extra symbols can ‘latch’ onto the stacked symbols that triggered the feature to help get some extra wins. It’s nice to have some colossal symbols available too, especially the Wild symbol. However, you can find most of this on other slots which also have some other features or ways to earn some big payouts. The Bonus Bet feature isn’t that spectacular either in my opinion. What I do like is the design though, resembling something out of a Nintendo video game. Unfortunately, that’s not really enough to recommend this game, but feel free to let us know what you think down in the comments section below.

A Great Looking Slot But Not That Rewarding