Suicide Squad is another game from Playtech to make use of a big Blockbuster movie like Suicide Squad. We’ve seen other slots like this including The Mask slot and generally, they’re a lot of fun and are pretty popular. So, can Suicide Squad slot have the same effect? Well, with a good few features like extra Wilds there’s quite a bit to like, but we’ll go into more detail on that shortly.

First off, how does the slot look? Well in the design department it certainly sticks to the theme of Suicide Squad. Many of the characters are there, the colours, the logos. It looks good, but I just don’t think it’s as exciting as it could have been. That might just be me though. The basic gameplay is also pretty standard, with a 5×3 reel setup and a rather low RTP of just 94.14%. Your goal is to spin the reels to get a winning combination from left to right using the following base symbols, listed in ascending order based on their value: 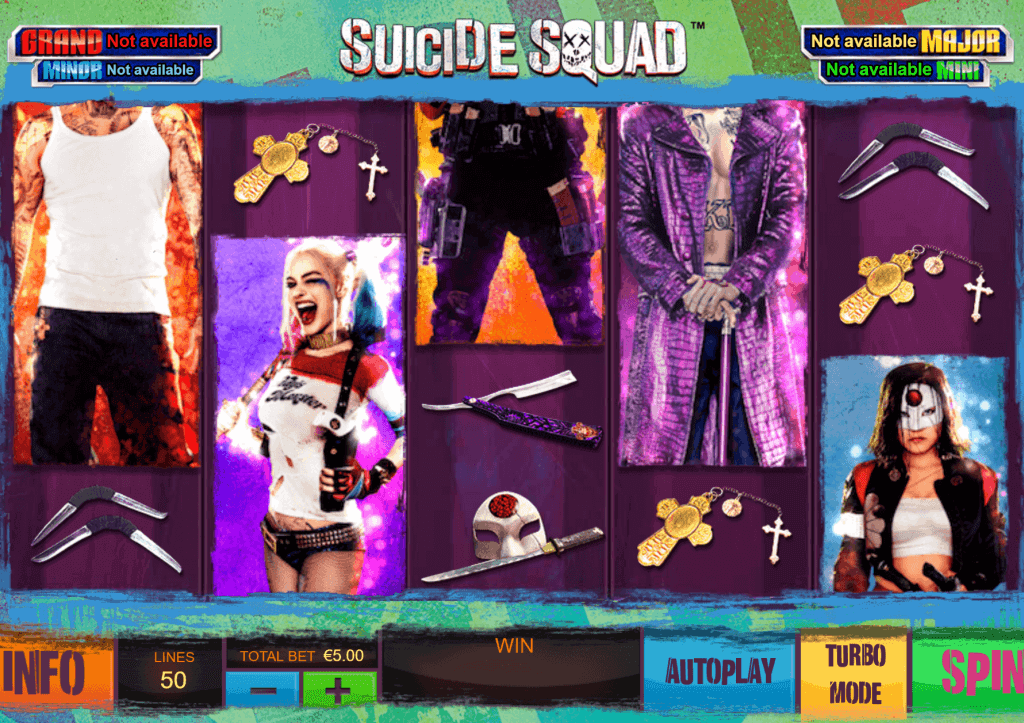 Enchantress Mode. The Enchantress symbol is used to trigger Enchantress Mode when it lands fully on any reel. This will add 4 Enchtantress Wilds symbols to her reel, and turn any Suicide Squad symbol into an Eclipse symbol. Furthermore, all wins as a result of this will be multiplied by 2x. For every subsequent spin, an Enchtantress Wild symbol is removed and the bonus ends when there are none of these symbols left.

Suicide Squad Wilds Feature. The symbols that represent the members of Suicide Sqaud can appear fully stacked on the reels to add Wild symbols to random positions. The number added depends on the member of the squad:

For every subsequent spin, a Suicide Squad Wild is removed.

DC Superheroes Jackpot. Suicide Squad slot has a DC Jackpot feature which can be triggered on any paid spin, even if there are no wins as a result of the spin. However, as with many of these types of features, the higher your bet the more likely it is that the Jackpot feature will trigger. Once triggered, you are guantreed either a Mini, Minor, Major or Grand jackpot. In order to play, you must choose from 1 of the 20 positions on the screen to reveal a colour corresponding to a Jackpot as shown on the right. Once you complete and area with a certain colour, that Jackpot will be awarded to you. If you don’t choose the positions in time, random positions will be chosen on your behalf. 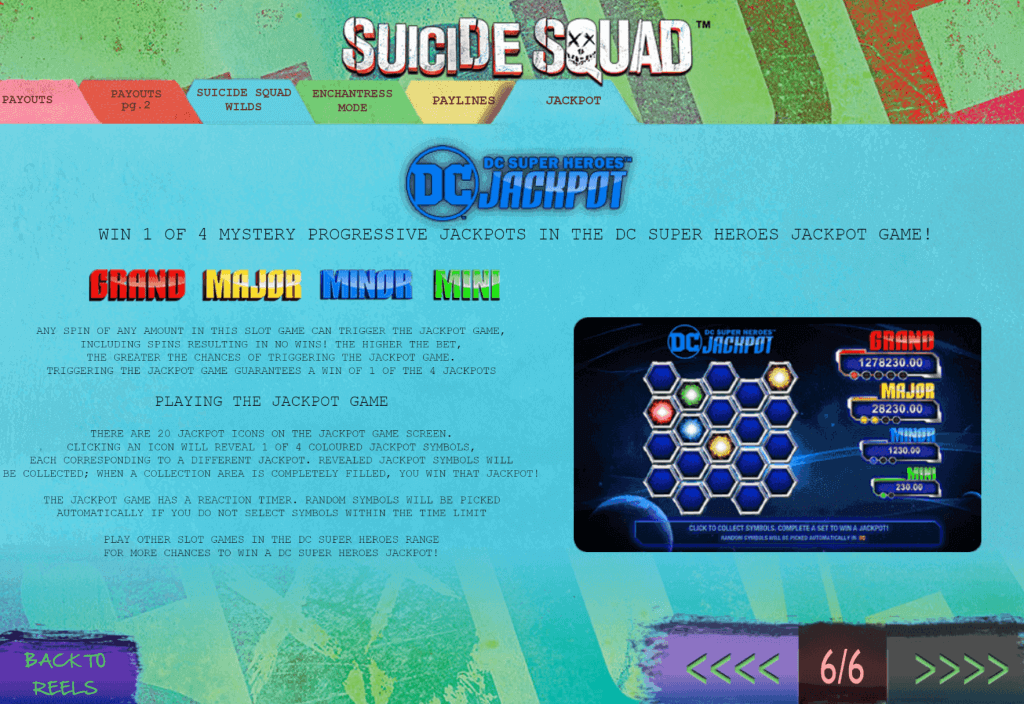 Suicide Squad slot from Playtech is of course based on the hit movie of the same name, featuring Will Smith, Margot Robbie and Jared Leto. Playtech have tried to create an equally exciting slot here based on its success, but in my opinion falls short of its full potential. The features aren’t bad, but not the most rewarding we’ve ever seen either. A lack of free spins is interesting, and I think could have made the game more appealing as a whole. It’s not a bad slot, and if you like the movie you should probably give it a go because you can make a decent return, but there are better slots out there and we won’t be spending much time with this particular game.