The Sweet Alchemy slot already sounds appealing to us before we’ve loaded the game up. But it isn’t until you actually do opt to play it that the extent of Play’n Go’s prowess in creating video slots is revealed. The Sweet Alchemy slot brings forth a collection of candies on its reels, which are what you need to form winning combinations from. However, it combines this general theme with the idea of magic too, with a friendly witch assisting you with your gameplay from the sidelines with her cauldron of spells. It’s all highly entertaining for anyone to play, featuring a cute soundtrack and highly imaginative graphics. Placing bets in the game is very easy to do too, all you have to do is click on one of the amounts that run along the bottom of the reels. There, you can choose between values of 10p and upwards to £100 per spin. Therefore, you get a great range of betting options to choose from when playing the Sweet Alchemy slot.

The game’s layout consists of five reels and five rows, making a square-shape rather than the traditional video slot oblong. This gives the Sweet Alchemy slot more of a unique interface for playing on. Furthermore, while standard slot games incorporate various pay lines, this one doesn’t have such. Instead, you create wins by combining clusters of the same symbol together, rather than on a specific line. Speaking of the slot’s symbols, these all exist in the form of different types of candies. There are eight of these in view as standard icons, including the blue donut-shape, the red love hear candy, the golden star and the green jelly bean-like shape. The star is the one that provides the largest standard pay-out, and as long as you match at least four of these same symbols together, you’ll receive a win.

As is usual with Play’n Go titles, the graphics that Sweet Alchemy incorporates are second-to-none, giving you a truly enthralling experience when playing this game.

While seeing candy symbols fall into place on the reels is a great thing, this Play’n Go slot also contains some appealing inbuilt bonus features too. And these are available to activate in the following:

Sugar Rush Meter: Every winning symbol that forms part of a combination will contribute towards filling up the Sugar Rush Meter, which can be seen below the witch’s cauldron. As this continues filling, various wild symbols will be added to the reels by the witch. Striped wild symbols will remove the entire row or column when it forms part of a win. Meanwhile, the dotted wilds will remove all instances of a random symbol when forming a win.

Mix the Elixir Free Round: To trigger this feature, you need to complete winning combinations that feature 38 symbols in total. One this occurs, the Mix the Elixir free round begins, featuring 2 candy spells. Every three additional winning symbols on top of this adds another candy spell to the free round, with a maximum of seven able to be gained. This feature round is played on a grid of nine reels and nine rows and again, you need to form winning clusters of symbols. There are three collection levels too. Level one activates the Elixir of Power Bonus, while levels two and three enhance the prizes that you receive in the bonus. 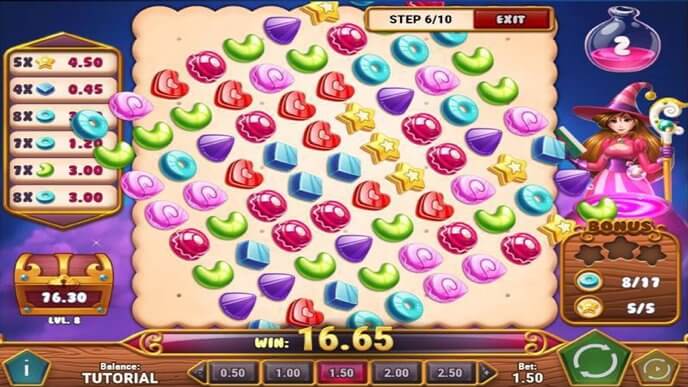 Candy Spells: During the Free Round, the witch stood at the side of the reels will conjure various candy spells to help you pick up winnings. The available candy spells are the following:

Elixir of Power Bonus: Once the free round is over, you will get to play the Elixir of Power Bonus. This requires you to pick squares of chocolate to reveal bottles of elixir. The first three matching bottles will provide you with your prize of a total bet multiplier or a total win multiplier.

Map: Every time that you complete the Elixir of Power bonus round, you will progress along the game’s map by one position. Scattered treasure chests make up part of this map too and the value in a chest is equivalent to 15% of the winnings from the base game from the time since you opened the previous chest!

The Sweet Alchemy slot is a very unique and highly enjoyable game. Slightly complex at first, but after a few rounds everything falls into place, literally.