Push Gaming have recently released a new game under the name The Shadow Order slot. It certainly sounds mysterious, and as soon as you start it up there’s quite a lot going on to draw your attention. But is it actually any good? Read on to find out more.

The theme, as I said, sounds intriguing but if I’m being honest it doesn’t really make much sense. There’s no background story or overall mission and I think that’s a real shame. The graphics are fairly good though and it’s not a bad looking slot overall. You have 5 reels with 5 rows, and an RTP of 96.73%. You must use the base symbols to get a win, and these are as follows, ranked in ascending order based on their value:

The Wild symbol, also known as the Order Medal symbol, is Wild and as well as being the highest value symbol in the game, also substitutes for all other symbols in a winning combination apart from the Orb symbols. 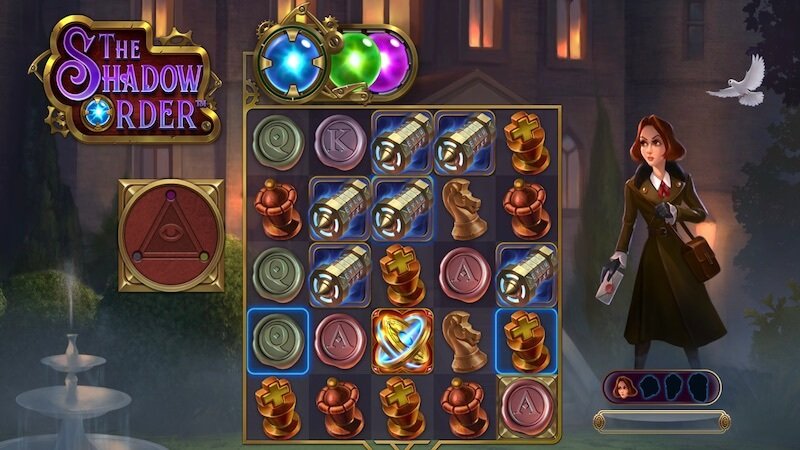 Orb Symbols. Three Orb symbols sit above the set of reels, each of a different colour. The become active once you charge them up with cascading wins. They also act like Wild symbols, rolling down the reels and towards the right hand side. If one of them manages to land in a hotspot, the respective Orb feature will be triggered after all cascading wins have finished.

Orb Of Destruction. The Orb symbol will remove all low paying symbols from the reels, allowing new symbols to fall in. These new symbols can be low value, however.

Orb of Creation. This Orb will add between 3 and 6 Wild symbols to the reels in any random position.

Orb of Preservation. This feature holds the highest paying symbol on the screen and removes all other symbols from view, apart from any Orb symbols. New symbols will fall in and continue to do so until none of the held symbol falls in.

Ring Symbols. Character 2, 3 and 4 are unlocked by collecting Ring symbols which can appear at any point during the game. They will be added to the meter and review a normal symbol underneath.

Character Features. These features can be triggered at the end of a spin. Character 1 can fully charge up Orb 1 and remove the top row, allowing it to fall 1. Character 2 will choose low value symbols and turn them into high value ones that are already on the screen. Character 3 Will add a single Wild symbol to every column. Finally, Character 4 will remove all low and mid value symbols and allow new ones to fall in, only the new ones will also have to be high value symbols.

Free Spins Bonus. Once all 3 Orbs have been collected in the collection tile, this feature is triggered and the Orb symbols will remain fully charged throughout the Bonus. The Orb symbols become sticky, staying in their position through and acting as Wild symbols. When an Orb symbol reaches the collection tile in the Bonus, a multiplied is added to each win. If 3 Orb symbols reach the tile, you’ll be given another 2 free spins and the orbs will return to their positions, fully charged. 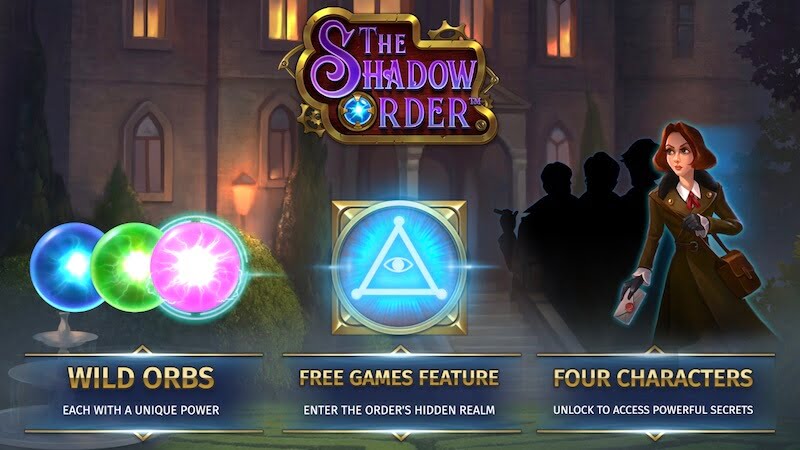 The Shadow Order slot from Push Gaming certainly has some interesting ideas and quite a lot of features all doing different things. As you know, I’m a big advocate of lots of features in slots as it makes them more fun, but I think Push Gaming needed to put a bit more time into this slot to really improve it. The theme could be great but there’s not enough behind it for it to make much sense and everything just feels a bit jumbled. Why don’t the characters even have names? I like the way the orbs work though, especially in the Free Spins Bonus, and it’s not a bad game to be honest. Payouts could be a little better but it’s all around pretty good and probably worth a shot for most players. You can also see some of Push Gaming’s other slots here.

A Mysterious Slot Full Of Features