Valkyrie Fire slot is a new game from Barcrest, a.k.a SG, and as such you can expect a certain level of quality from one of the biggest software developers in the gaming industry. I always get excited when they release a new game, but I have to say upon starting Valkyrie Fire slot up, I noticed a distinct lack of features compared to what I’m used to seeing from this company. That isn’t necessarily a bad thing, but I was surprised but I’ll come into more detail on these shortly.

Design wise, you have a 5×3 reel set-up here with a relatively simple design in keeping with the Nordictheme, but it’s certainly not as flashy or vibrant as some other slots we’ve reviewed like the recently released Genie Jackpots Megaways slot. It doesn’t look bad by any means though. All you need to do is spin the reels to try and get a winning combination from left to right using the following base symbols which are ranked in ascending order based on their value:

Valkyrie Symbol. The Valkyrie symbol is quite a special one here as it has several properties that make it very desirable and interesting. For a start, it’s the most valuable symbol in the game so of course you’re going to want to try and get a win with it. As well as this, it’s a Wild symbol meaning it substitutes for all other symbols in a winning combination apart from the Free Spins Bonus symbol. That way, even if you don’t have enough of them to get a win with just the Valkyrie symbol, hopefully it can help you get another win, even if it’s less valuable. That being said, it actually doubles any win it which is substitutes for another symbol, so it’s better than just having a win without it. The wins are only doubled once though, not for every substituting symbol if there is, in fact, more than one Valkyrie symbol. 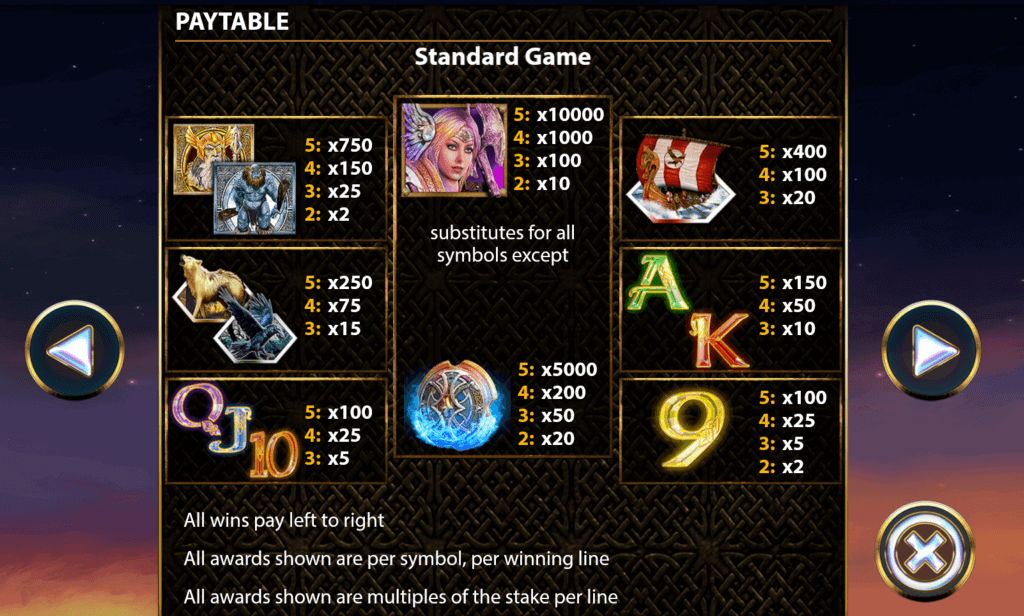 Valkyrie Fire slot from Barcrest in many ways resembles some of their other slots in terms of how it plays out and the types of rewards you can expect to receive. However, I was a little disappointed in the lack of features available here. The Valkyrie symbol is pretty cool in that it’s highly valuable, Wild and doubles other wins, and the Free Spins Bonus isn’t bad (although I would have liked to have seen more free spins on offer either initially or by winning extra ones), but that’s all there is really. I think the game could have been a bit more entertaining had they included just a couple more, perhaps a simple in-game feature like re-spins or something. Like I say, it’s certainly not bad and pays out decently well, plus it looks pretty good too, but it’s not as exciting as I would have liked. Perhaps you’ll disagree, so be sure to give it a go when you get a chance.