Vegas Magic slot comes to you from Pragmatic Play and they want to offer you something simple yet fun and hopefully, rewarding. They’re doing this by only offering the one feature, an avalanche-type feature with a twist. But I’ll come onto that in more detail below.

When it comes to the design, there’s nothing too spectacular going on here but it certainly looks the part for a magic-themed slot. There are lots of flashing lights and relevant symbols for Vegas so all in all it’s pretty decent. You have a very simple 5×3 layout here with just 20 paylines, and an RTP of 96.08%. What you need to do is spin the reels to get a winning combination from left to right using the following base symbols which I’ve listed in ascending order based on their value:

The above are just the base symbol in the game, meaning the only pay out when in a winning combination of 3 or more according to the paylines. However, there’s also a Wild symbol in Vegas Magic slot shown as a Wizard doing some sort of card trick. The Wild symbol will substitute for all other symbols in the game apart from the Scatter symbol, and can appear only on reels 2, 3 and 4. Interesting though, this symbol has some other properties. If it hits the reels for the first time during the tumble cycle, then it will expand vertically so that it fills the entire reel only if there is a win. In doing so, your odds on getting a win thereafter are much improved. Note though that the Wilds remaining on the screen after a tumble will not expand for a second time. This symbol does not pay out on its own. There’s also a Scatter symbol in the game which is actually the second most valuable symbol. It can appear on all the reels and will pay in any position.

Tumble Feature. This is the main, in fact, the only feature of this game and it’s usually just a small feature that we’ve seen in other slots like Asgardian Stones slot, but there’s more to it here. After a spin, if there’s a win then all those symbols will disappear and additional symbols will fall down from above to fill the empty position. If there’s another win now due to the new symbols, these will then be paid but will be multiplied by a multiplier of 2x. This can continue so long as there are more wins, and each time the multiplier will increase by 1x. Best of all, there’s no limit to the number of wins and multipliers you can have, so theoretically you could see some decent payouts here. All the wins will be added together until there are no more wins, and you will receive your payout. The feature will then reset and the multiplier will go back to its base value for next time. 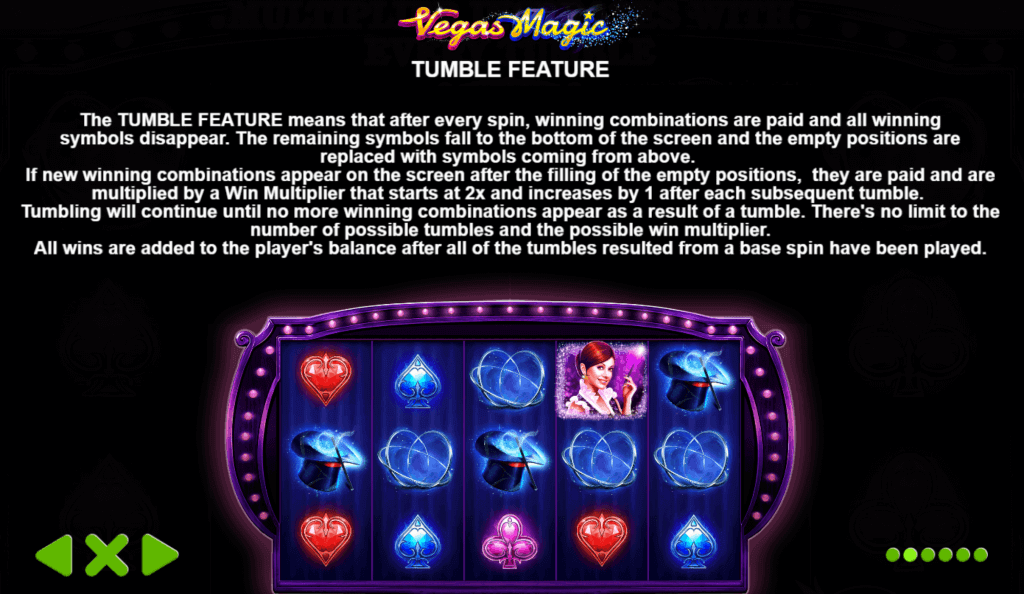 Vegas Magic slot is a new game from Pragmatic Play that’s very simple but surprisingly fun. As you can see, there’s only one feature and it’s not even one we haven’t seen before, proving quite popular with various manufacturers and of course the players. They’ve taken things one step further though here by providing increasing multipliers the more wins you get. The best thing is there’s no limit to this, so you could get some nice big payouts. Does this happen in reality though? Not very often. Most wins result in a multiplier of 2x or 3x at best, and you’ll rarely see much more than that. As such, even though payouts are quite regular they just aren’t high enough to compete with most other slots and I’m not sure this game will appeal to that many. By all means check it out, but don’t expect any miracles.