If you haven’t ever watched the Wacky Races animated television show, then we suggest that you stop everything you’re currently doing and proceed to do so. Or, you could opt to play this Bally Technologies game instead, which bases itself on the series. Full of all of your favourite characters, the Wacky Races slot is sure to bring a mass of entertainment to your screen. It’s also got a feature known as the ‘Better Bonuses’ mode, which is quite self-explanatory. Clicking on it will provide you with gameplay that features better bonuses for an extra bet on top of your standard stake. Speaking of which, the bet per line on the Wacky Races slot can be changed from the minimum of 1p right up to £1. This means that the maximum overall wager that you can bring into play stands at £75 per spin if you have the ‘Better Bonuses’ feature active.

The layout of the Wacky Races slot is made up of five reels and four rows altogether. Therefore, it’s slightly larger than the standard video slot design. This also integrates a total of 40 separate pay lines for you to bet on, and these cannot be changed in any way. Plus, you’ll be able to claim different wins depending upon if its Penelope Pitstop, the Slag Brothers, Professor Pat Pending or one of the other characters that you bring into view. And if you trigger one of the feature rounds at the same time, these wins will combine.

The Wacky Races slot incorporates some intriguing graphics too, reminiscent of other Bally games, with a thrilling and action-packed soundtrack included to boot. 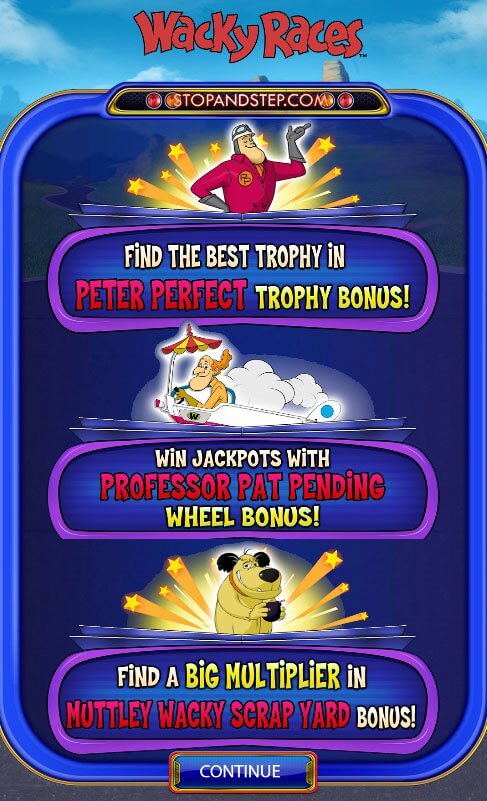 It’s not only the base game that the Wacky Races slot provides on an entertaining level, but a range of special features that you can trigger as well. These exist in a few formats, and are the following: 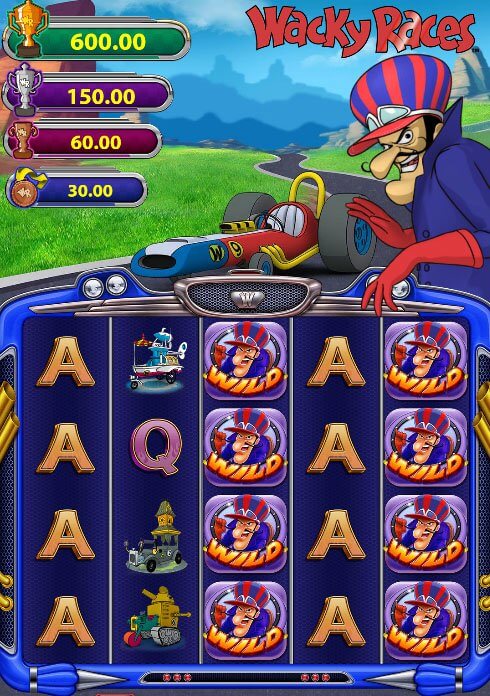 Racing Bonus: If you bring three scattered Wacky Races or Wacky Races Wild symbols into view on reels one, three and five, you’ll activate this bonus round. Then, five cars are shown to you, with one of them being assigned a special bonus enhancement before the start of the race. You need to click on the ‘Start Race’ button to begin things. At the end of the race, one of the cars wins and the feature associated with that car is awarded to you. These exist in the form of different Free Spins and bonus rounds as follows:

The Wacky Races slot is good fun and will certainly bring back the nostalgia of the original TV series.