Yak, Yeti and Roll slot comes to you from Betsoft and is just in time for Christmas. It’s not really a Christmas theme, but it’s certainly a fun and involves lots of snow which is good enough for me. What I don’t really understand is the Yak part of the title as there doesn’t appear to be a yak anywhere in the game, but oh well.

The slot as a whole looks OK with the reels pushed to one side to give you a better view of the background. You’re set high in the mountains covered in snow, with these strange sledges ridden by both Eskimos and Yetis. It’s strange, but at least it’s original. There are 5 reels in total with 3 rows and 20 paylines, providing an RTP of 96.54%. Your job is to get a winning combination from left to right using the base symbols in the game along the paylines. These are listed as follows, ranked in ascending order based on their value:

Now while these are the paying symbols in the game that offer instant cash rewards on a payline, there are a couple of other symbols in the game worth noting. For a start, there’s the Wild symbol shown as a Yeti which substitutes for all other symbols in a winning combination apart from the Eskimo Scatter symbol. It also appears only on reels 2, 3 and 4. What’s the Eskimo Scatter symbol you ask? This is actually the highest paying symbol in the game shown as an Eskimo. It pays in any position making it particularly interesting. 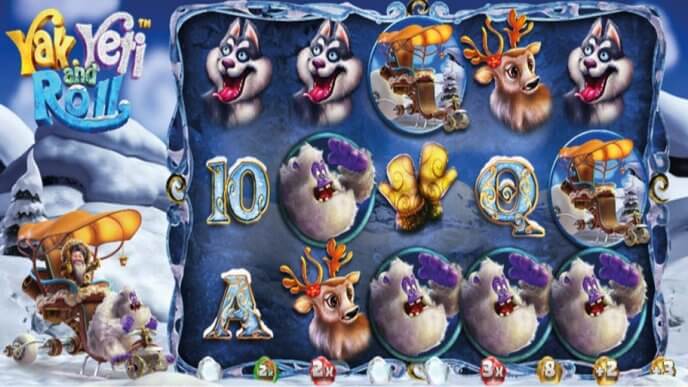 Yak, Yeti and Roll Bonus Trail. This feature takes advantage of the cascade mechanics used in the game. For those of you who don’t know (although you should by now as many slots are doing this), this means that whenever there’s a winning combination, the symbols from that win will be removed and new ones will fall in from above. This means that in the same spin, you can get additional wins. Yak, Yeti and Roll slot takes advantage of this by offering you additional rewards the more reactions you get (reactions are just wins). In short, every reaction will advance you along the trail giving you some of the following rewards:

The final reward on the trail a reward of 200x your stake, but you need 17 reactions to make this happen. Seeing as the trail reset after each spin, this is very difficult to achieve.

Yak, Yeti and Roll Free Spins. You also have a Bonus Trail available during free spins. The multipliers will multiply cascade multipliers and will continue throughout the free spins, accumulating as they do so.

Double Up Bonus. After any standard win, you can double up and gamble either half or all of your winnings, as often as you like. Simple choose heads or tails and if you win, you double your stake.

Purchase Option. Like some other slots we review, this one lets you buy the Free Spins Feature. Doing so will give you 18 free spins with a 4x multiplier. 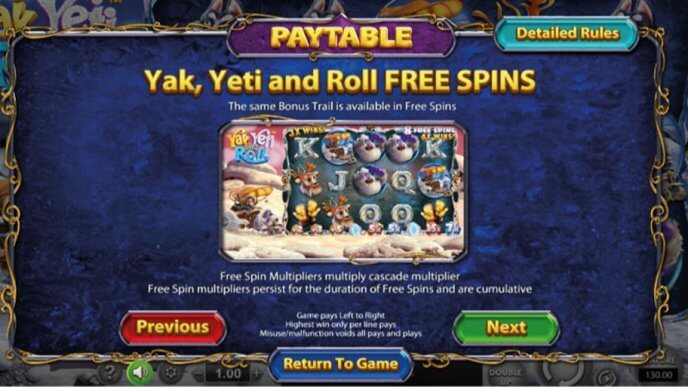 Yak, Yeti and Roll slot from Betsoft is all about the cascading symbols and using them to get some additional rewards. It does this by setting you on a trail and offering free spins and multipliers along the way, increasing in value the more reactions you have. We have seen this kind of idea before in other slots like Journey Of The Gods slot but for me, I’m not such a big fan. Trying to get 17 reactions isn’t very realistic in my opinion and the reward for doing so isn’t even that impressive. However, reactions do occur regularly so you will often get some small rewards at least. So if you like low-medium variance games, this one might suit you well but I still think there are others out there which are more rewarding overall. Let us know what you think down in the comments section below.