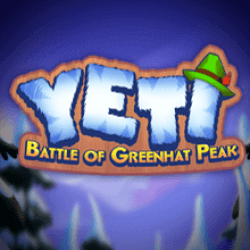 Yeti Battle of Greenhat Peak slot is a brand new game from Thunderkick with a fun, snowy theme centred around the mythical creature known as the Yeti. These gigantic creatures, often referred to as abominable snowmen, are legends in the Himalayan regions of Nepal and Tibet and have been the subject of various movies usually portrayed as ferocious beings. In this game, however, Thunderkick have taken a very different approach, creating a friendly cartoon-like character that looks more like a cuddly toy than an evil monster in order to appeal to a wider audience.

I think the theme and design of this slot are very attractive and reminds me a lot of Himalaya slot that has only recently come out also. The gameplay and bonuses, however, are significantly different, which isn’t surprising as the slots have been developed by different companies. Yeti Battle of Greenhat Peak slot has a 5×3 reel combination with 11 paylines, and your aim is to achieve a winning combination using the base symbols from left to right in order to win money or a bonus including sticky wilds and free spins, but more on this shortly. The base symbols are as follows, ranked here in ascending order based on their value:

It’s interesting that Thunderkick have decided to include some of the old school slot symbols in this slot, as they don’t really tie in with the theme and I can’t help but think they just didn’t put any time into coming up with some more original symbols, but as this has no impact on the slot itself it doesn’t really matter. The Wild symbol here is portrayed by a man in a green hat and a very noticeable moustache, substituting for all symbols in the game apart from the bonus symbol.

Wild Attack. This will grant a respin with an additional 1-3 sticky wild symbols. Additionally, any wild symbol that does not appear on a winning pay line will become a sticky wild.

Bonus Game. This is triggered by 3 or more Bonus symbols which will award at least 10 free spins. For every additional bonus symbol, you will gain an extra step on the Wild Attack meter. Every 3 bonus symbols will give an extra random sticky wild and 3 additional free spins until the meter is full. Once you do fill the meter, 5 more free spins will be provided meaning you can have a total of 31 free spins available. Additionally, for any wild symbol that is not part of a win, it will become sticky until it is, with the ability to have up to 3 sticky wilds.

Yeti Battle of Greenhat Peak slot is a very visually appealing game with a nice, easy on the eye theme with vibrant colours and large fonts making everything very clear. I think Thunderkick have done a great job here with the graphics and the sound that this slot offers, but of course, a good slot is about so much more. When it comes down to the gameplay, I like the idea of having up to 3 sticky wilds and being able to win extra free spins but with only a maximum of 31 available, compared to some slots which have over 100, you’re not going to make a huge amount of money here. On the flip slide, needing only 2 bonus symbols to trigger Wild Attack is nice to see, as 3 is usually the minimum required to win any kind of feature, and it means the game is quite varied and more engaging. Overall, with an RTP of 96.1% and an average variance, this Yeti Battle of Greenhat Peak could certainly be enjoyed by many and with such a great design I’m sure it will entice a few players, but the gameplay won’t be for everyone.