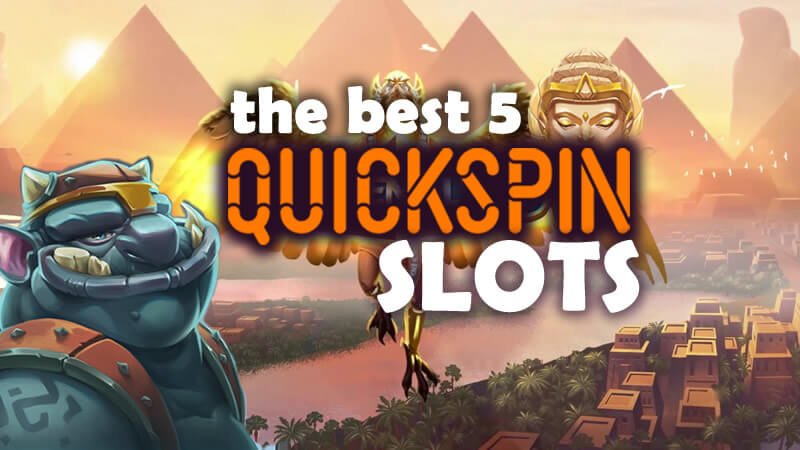 Quickspin is a Swedish slot developer which specialises in high-concept titles that are stunning to look at and offer plenty of interesting gameplay. Playing a Quickspin slot always gives the impression that the design team has put some real thought into the game. Respins, Expanding Wilds and insane Power-Ups are just some of the features we have come to expect from this studio. These are our top 5 Quickspin slot games.

Quickspin’s first attempt at a clusterpays slot combines good payouts, thrilling gameplay, and top-notch design. Golden Glyph is yet another Ancient-Egyptian themed slot but is one of the most beautiful to look at, with the 7-reel, 7-row grid having a backdrop of the pyramids and the Nile. The symbols include Egyptian kings, queens and those funny squiggles which this civilization used to write in (called glyphs – hence the slot’s name). Golden Glyph has a tumbling reels feature where winning clusters are removed from the grid so that others can fall into place, potentially meaning you can get consecutive winners from just one spin. That’s really nice, but the most intriguing features are the power-up wild symbols, which appear on the golden wheel at the side of the grid. These will power up any winning clusters, while the bonus symbol triggers the free spins round, where you can win 13,185x your stake. Golden Glyph has so many exciting features that you can play it for hours, and when combined with the beautiful design, this slot is Quickspin’s best release of 2019.

This slot is themed around a high-octane heist set in the neon-lit streets of the Japanese capital and is the sequel to 2016’s The Wild Chase slot. Both of these titles are clearly inspired by the Fast and Furious film franchise, and if you enjoy the movies you will love Tokyo Go. The grid has 5-reels, and a default 3-3-4-4-5 row structure with 76 paylines, which can expand to 5 rows and 259 ways to win. There are no free spins on this game, but Wild Chase Tokyo Go makes up for it with the respin feature, which triggers whenever you hit any winning combination. Each winning combination triggers yet another respin, with the 4th winning respin expanding the grid to 5 rows and triggering the Super Respin feature, where you can win 2,757x your stake. Although that probably won’t be enough for serious gamblers, Wild Chase Tokyo Go is a fun ride for recreational slot fans.

Another Quickspin sequel, Sticky Bandits Wild Return takes place in a spaghetti western saloon, where our three hero desperadoes try to strike it rich in a 5-reel, 4-row grid full of skulls, cigars, guns, and whiskey. There are a couple of features in this one which you will really enjoy. The Lucky Shot bonus is triggered by landing three skull scatters anywhere on the reels, which gives you 7 free spins. Whenever one of the outlaws appears on the reels, a shot is fired, transforming one of the symbols into a wild. If this happens to be one of the massive symbols (2×2 or 3×3), then this turns into a sticky wild, leading to potentially big payouts. But our favourite feature comes in the form of the Quick Slot bonus, triggered in the base game by landing the bonus in the fifth reel. In this bonus game, you get between 1-3 spins on a classic looking one-armed bandit and can win up to 500 times your stake. If you like the wild west theme, there are few better-looking slots out there than Quickspin’s Sticky Bandits Wild Return.

Hall of the Mountain King is inspired by the classical music piece by Norwegian composer Edvard Grieg. This is a thumping monster of a track which is a staple of movie soundtracks, and it also works really well in this high-concept slot game as it plays in the base game and the bonus rounds. The design is gorgeous, centred around a giant orc living in a mountain, who invites you into his great hall to spin some reels with him. Hall of the Mountain King is jam-packed with features, coming with stacked wilds, progressive multipliers and a free spins round with 3 levels where multipliers and whirling wilds help you build up huge payouts. This is one of the most ambitious slot games ever built, and Quickspin should be applauded for combining an interesting story with a high-RTP, high variance title which never manages to get boring.

This Zen-themed slot somehow manages to be chilled-out and yet exciting to play. The Far-eastern beats come straight out of a posh spa, while the symbols are rocks adorned with Chinese calligraphic symbols. But just as you start to relax, Quickspin’s Divine Dreams hits you with some of the most thrilling gameplay you can handle. 243 ways to win, tons of features, and a bonus reel which rewards you with extras in the base game and the free spins round. When 3, 4 or 5 scatters appear on the reels, you are rewarded with up to 20 free spins. That bonus reel plays a major role here, and if all the multipliers and wilds fall right, you can win up to 7,000x your stake.

Quickspin is one of the best developers for combining beautiful graphics and potentially epic wins, which make their slots a big draw for casual gamers and more serious slot fans alike. We can’t wait to see what this developer comes up with next and we are already looking forward to their Polar Paws title, slated for release just before Christmas. Which are your favourite Quickspin slot games?

November was another strong month for new slots. As us…

The slot world had a slightly disappointing summer in …

September has come and gone, but how was it on the slo…