Neon Staxx is an online slot and High Street betting shop game from Netent, that provides players with a retro theme and a couple of inbuilt features to enjoy in the process. You’ll realise this from the moment that you load the game up and you see its symbols and hear its soundtrack, which is very 80s in itself. Playing the game allows you to place bets that start from a minimum of 20p per spin and go up to a maximum of £100 at their highest (the FOBT stakes vary, up to £2). This is achievable by using the ‘Coin Value’ box and the ‘Level’ buttons.

Neon Staxx exists as a five reel and four row layout and it utilises a total of 40 separate win lines. These are not something that you’re able to customise either, as Netent has set them in place. The pay-outs that the symbols of the game provide differ depending upon both the stake that you play per round and the type of symbol you line up. Alongside these features, the game also contains an ‘Auto Play’ feature, which allows you to set the reels off spinning several consecutive times at the same wager level.

Symbols upon its reels include the often-seen playing card additions, including A, K, Q and J. They are joined by four Predator symbols, which are the following: a blue snake, a purple eagle, a pink panther, a yellow lion. 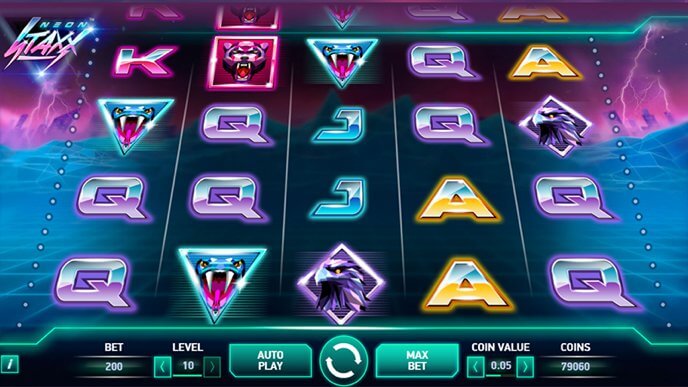 It’s not only a basic slot game that Neon Staxx provides, instead, it has a small group of additional inbuilt features for you to trigger at the same time. There isn’t a great number of these for you to experience, but they do make the slot much more entertaining. 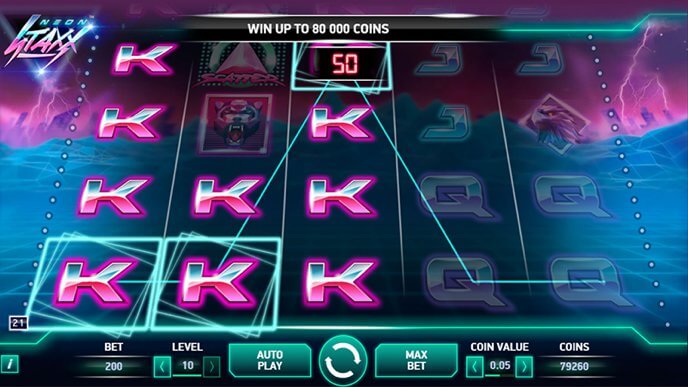 To add to these standard bonus rounds, Neon Staxx also incorporates its very own wild symbol too. This one showing up on the reels will see it substitute for all other symbols, with the only exception to this being the scatter additions. Therefore, it can help you greatly in forming winning combinations.

Neon Staxx has been designed and created by Netent and is available to play at multiple different online locations, as well as UK high street betting shops Coral and Ladbrokes. It is accessible via both real money play and demo play. From playing the game, you have the ability to win up to 80,000 coins online, or £500 in the bookies, which is possible via the bonus Free Spins round or a full screen of jackpot symbols.