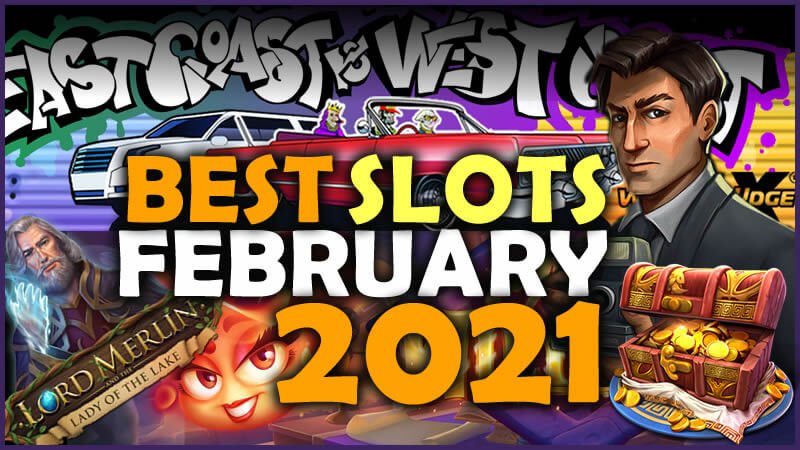 February saw a bunch of new slot releases from developers, but how many of them were any good? Our expert reviewers identified six new slots which scored a rating of 8/10 or higher, and below you can read all about these recommended casino games.

This alien-themed slot from Kalamba comes with an X-files vibe, a 5×3 grid, and a backdrop of a detective’s office (presumably in or around the mysterious Area 51). The symbols include variously-coloured aliens, their claw prints, and a wild symbol that is Agent 51 himself – who looks very much like Mulder from the hit 90’s TV show. The base game features so-called K-loops, where 9 spins in a row collect accumulation symbols, which then expand on the 10th spin for decent wins. I like this a lot, as it means you don’t have to worry about crazy-long dry runs. These expanding accumulation symbols also show up in the free spins, where the biggest wins occur (more than 5000x is possible). Although it is rated as a high variance slot, Agent 51 has engaging gameplay and an interesting theme which should give it major appeal for all kinds of slot fans.

The Hand of Midas

Pragmatic Play’s latest Greek mythology-themed slot is based around the mythical King Midas, who was punished with a touch-it-and-turns-to-gold curse. That kind of curse would be handy on a temporary basis – but will slot fans strike gold with this game. Well, it looks great, although for some odd reason, the action seems to take place underwater. Premium symbols include goblets, bowls, treasure chests, Midas’s daughter (who seems to have fallen victim to her father’s deadly curse), Dionysus, and Midas himself (the highest paying). In the base game, wilds add random multipliers, and the creepy-looking scatter (a golden hand) triggers the free spins. In this bonus feature, each scatter gives you 3 mini reels with 3 spins each. Every wild become sticky, as does its multiplier, allowing you to build up impressive bonus wins. There is even a minimum guaranteed win, set at 10x for 3 scatters, 20x for 4 scatters and 30x for 5 scatters. As you might expect with this generous bonus action, The Hand of Midas slot boasts some rather impressive stats to attract veteran slot fans, including a high volatility rating, a 5000x payout potential, and an RTP over 96%.

It has to be said that Miss Wildfire is a pretty weird slot from Elk Studios, but the excellent soundtrack, engaging theme, and thrilling gameplay make it a winner. The 6 reels are filled with colourful symbols, but the spine-chilling music makes it clear that all is not as it seems. Sure enough, the rather cute Miss Wildfire symbol often becomes a spreading wild, dancing along the reels from right to left, awarding you respins as she does so. Any logs on the reels might also burst into flame and turn into wilds when she passes. There’s also a free spins round where logs are collected and low pay symbols are transformed into premiums. All in all, you can win up to 5000x on Miss Wildfire, and the medium variance makes it an entertaining ride.

The latest release from NoLimitCity is themed around the deadly rap wars of the ’90s, which resulted in the deaths of the Notorious BIG and Tupac Shakur. It comes with the same verve and attention to detail as other slots from this studio, with an RnB soundtrack, while police sirens occasionally wail in the background. What’s more, East Coast vs West Coast makes full use of both the xWays and xNudge mechanics and comes with no less than 5 modifiers and drive-by respins in the base game. High-value symbols are made up of ghetto blasters, pit bulls, Abraham Lincoln, George Washington and Benjamin Franklin, all drawn in the same irreverent style that we saw in Punk Rocker. Three of 4 scatters trigger the main bonus feature, and players can choose between the West Coast and East Coast spins. They are both pretty much identical in terms of your chances to win, as you must unlock all symbols on the top bar to enjoy coast to coast spins. As always with NoLimit games, there is a ton of action to take in, and the 30,000x stake payouts should see East Coast vs West Coast become a firm favourite among the slot streaming crowd.

No month would be complete without a megaways title, and this time it is the turn of iSoftBet to wow with us more paylines than we can count. Theme wise, this is another underwater slot, but unlike the Midas one from Pragmatic we looked at above, this makes sense, since Neptune was the Roman god of the sea. The deity offers over 46,000 ways to win on this 6-reel, 6-row slot, with symbols made up of starfish, turtles, sells and Neptune himself – who pays out 40x for five of a kind. In the base game, each win triggers a cascade, while every wild that lands could activate a multiplier. Four (or more) trident scatters trigger a free spins round where all low pays are removed. What’s more, Neptune’s Fortune Megaways even comes with a picking game (triggered by the treasure chests above the reels) where you have a chance of winning one of four jackpots (with the Grand prize of 1000x your stake).

Lord Merlin and the Lady of the Lake

Play n’ Go has come up with yet another eye-catching slot in this Merlin-themed casino game, which will appeal to all fans of Arthurian legend, as well as bonus hunters. In fact, the bonus is about the only thing to look forward to in terms of features, as the base game relies on quite lovely graphics (symbols include hats, staffs, Merlin himself, and the lady of the lake as the wild) to keep us entertained until we land the 3 Excalibur scatters. Landing more Excaliburs doesn’t mean you get free spins (you always get 8 of them), but 4 of them will get you a multiplier of x10, and 5 of them will give you an incredible 100x multiplier. During the bonus, a different symbol is selected as the special symbol for each spin, and when enough of them land to create a winning combination, they expand to cover each of their reels. All in all, you are looking at a 10,000x max potential win on the bonus game, making this Play n’ Go slot the game of choice for February bonus hunters.

So that was it for February. Not the most incredible month for slots, granted, but it’s good to see that the creative team at NoLimit City continues to come up with some interesting ideas, and Kalamba exploring the world of flying saucers and little green men. We now look forward to the month of March, and already it shows promise, with the groovy Reel Desire from Yggdrasil already a front runner for slot of the month.