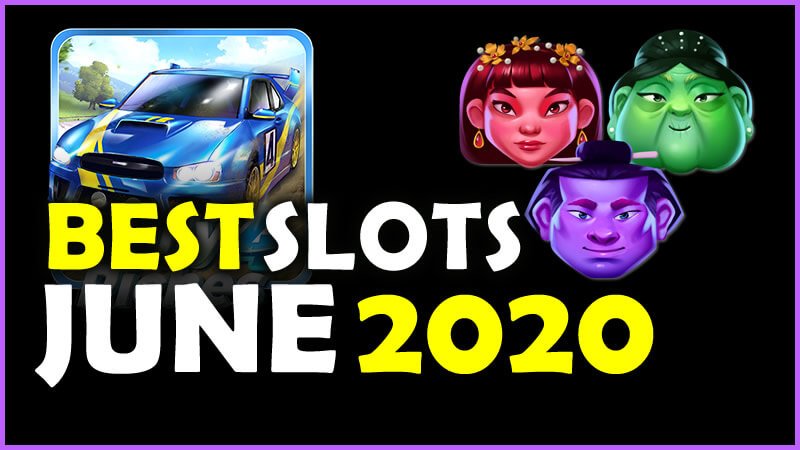 We are now half-way through 2020, and slot developers show no sign of slowing down their appetite for creativity, stunning design, and megaways mechanics. Below are the 10 best new slot releases of the month, as rated by our slot reviewers.

Red Tiger’s Aztec Spins is a pretty slot with a Mexican theme. Design-wise, there are few surprises here. Symbols include eyes, snakes, and temples on a 6×4, 30-payline grid, and a thumping jungle tune drives the action along. The key to this slot is the Aztec wheel, which controls all the game’s features. To trigger it, you must fully land the 2×2 wheel symbol, which then spins to decide your bonus. Locked symbols and 10x multipliers on your next win are always welcome, but the wheel might also take you to a free spins round, where you start off with 12 free spins (and more can be won). When the stars line up kindly, the Aztec Spins slot has a ton of potential to make you as rich as Montezuma himself.

This iSoftBet slot is sadly not inspired by the Charlie Sheen ‘90s comedy film, but Hot Shots 2’s football-playing cartoon animals do provide a lot of fun as well as some big wins. The symbols are carried over from the original and include pugs, foxes, bulls, and chickens, with the football acting as the wild and the game logo representing the scatter. A free spins round sees golden wilds that expand both vertically and horizontally, as well as increasing the multipliers on offer. Hot Shots 2 was originally intended to be released in time for Euro 2020, but the lack of summer football actually makes this slot even more welcome this year.

The fairy tale Jack and the Beanstalk is brought to life in this megaways slot from Iron Dog. The six reels produce a maximum of 117,649 ways to win, with symbols made up of characters and objects from the story itself. These include the goose, the giant, Jack himself (who provides the highest value in the base game at 25x for six of a kind), and the golden egg acting as the wild. A magic harp sits on the left, adding wilds and multipliers to boost your payouts. The beanstalk is found on the right, and your progress up it triggers the bonus feature, with up to 12 free spins and an unlimited multiplier. Megaways Jack is an undeniably charming game and the max payouts of 25,000x give it the potential to lay some golden eggs of your own. 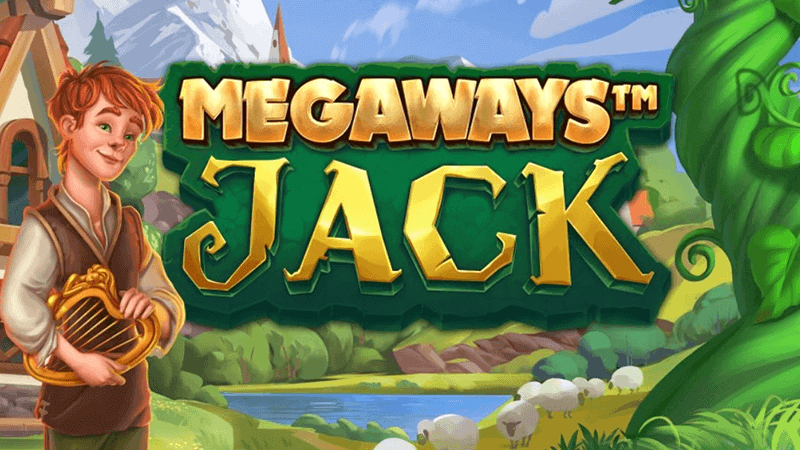 If you enjoyed Elk’s Cygnus slot, you will appreciate their follow-up, IO. This 4096-ways, space-age slot also makes full use of their gravity mechanic, where the winning symbols on the diagonally positioned grid are removed, allowing for new ones to fill their place. The soundtrack is a high-tempo EDM tune which helps the slot action pass quickly, as does the futuristic strobe lighting effects. Charged wilds come with 4 extra lives, with one life being lost for every win.  Wild forge symbols fill empty spaces below it with multiplier wilds, and laser symbols burn paths into the reels, creating new wilds as they do so. There’s a free spins round too, triggered in the usual way, and here the grid turns into an 8×8 format, with charged wilds and wild forge symbols collected throughout the feature. This is yet another intriguing slot from the folks at Elk, who are having a strong 2020 so far.

This fun little Quickspin game will appeal to fans of both the vampire and Japanese genres. It’s a colourful slot, with a 5×5 grid sat on a backdrop of a moonlit pagoda, and symbols made up of purple, green and pink people, and the blue vampire Senpai character which acts as the wild. In true vampire fashion, this blue symbol turns any of the other people symbols into wilds, and they, in turn, also change adjacent people symbols into wilds. That means, of course, plenty of wins in the base game. Our blue vampire friend also plays a key role in the bonus feature, as it turns sticky in the reanimated free spins, changing position on each new spin, causing more symbols to turn wild.

Pragmatic Play takes us into outer space with this megaways title. It is just as beautiful as NetEnt’s Starburst, but with a hell of a lot more payout potential. The symbols are made up of colourful stars and jewels, an electronic synth tune plays in the background, while the reels use a classic megaways layout i.e. 6 reels, with variable rows which change on each spin. All in all, there are 117,649 ways to win, with most of the biggest wins coming in the free spins feature. Here, expanding wilds remain sticky for the duration of the bonus, with 10,000x as the max payout. It’s highly volatile, but for those space-age fans with the stomach for it, Starz Megaways will likely by the hit of the summer.

Gold mining has inspired a fair number of slots in the past year or so, and iSoftBet’s entry – Gold Digger – is one of the best we have seen so far. It follows the adventures of an elderly prospector poised over a detonator as he watches you spin the reels and try to find some precious nuggets to add to his retirement fund. A slightly Deliverance-esque banjo plays in the background as the 5 reels spin symbols associated with the gold mining profession, including lamps, pickaxes, and of course the golden nuggets themselves. Interestingly, Gold Digger dispenses with a free spins feature – instead focusing on respins, which are triggered by landing 5 or more golden nuggets anywhere on the reels. In this feature you get 3 respins, with any nuggets that land sticking in place and resetting the number of respins to 3. Reel boosters also play a part, including extra rows, extra respins, and even some multipliers. This is the kind of medium variance slot fun we love to play. 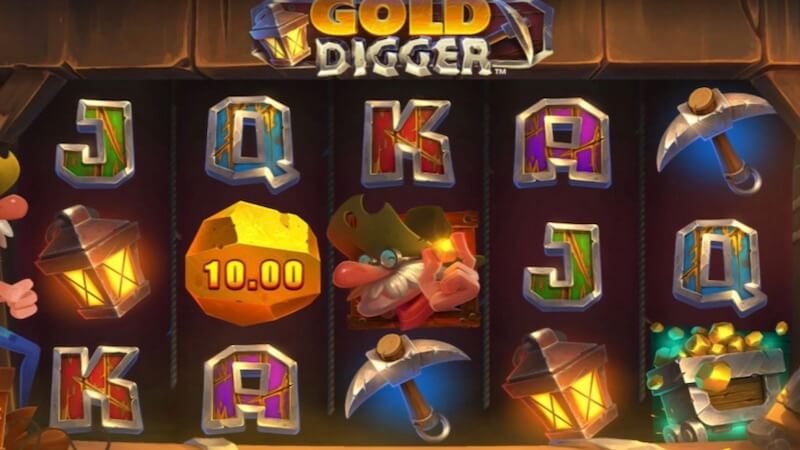 It wouldn’t be a review of the month’s best slots without a Play n’ Go entry, and Rally 4 Riches is a worthy contender for the slot of the month. It’s a visually stunning game, with a backdrop of a mountainous road which could well be in the Lake District. Symbols are made up of rally cars and fruits (a connection which for the life of me, I can’t understand), spinning on a 3×3 grid, with a bonus reel off to the right. As is often the case with Play n’ Go titles, Rally 4 Riches goes heavy on the features, and most of these come courtesy of that bonus reel. These include multipliers, nudge wilds, and respins. The best feature of all is the Championship Race Bonus, where you first enter and compete in a car race, and based on how you finish, you enter a free spins round. First place in the race lets you compete for 5000x your stake. Although it might have been better to give us some choices when it came to competing in the race (maybe we could have first chosen a car/driver?), this is an intriguing slot from Play n’ Go and we hope to see more sports-themed games from them soon.

Age of Conquest slot is a beautifully designed fantasy slot from the up-and-coming Neon Valley studios. Across the 5 reels and 3 rows, we are treated to symbols comprising griffins, horses, heroes, and diamonds, while an impressive-looking castle can be seen in the background. The base game is all about triggering wild reels. To do, so you collect diamond symbols that are added to diamond meters above each reel. Just 2 of them are needed to turn that reel wild, leading to frequent (and fairly decent) wins. Free spins are triggered in the usual way, but players can choose between 2 free spins with 3 wild reels, 8 free spins with 2 wild reels, and 25 with just one wild reel. Beautiful graphics and fun gameplay make Age of Conquest the slot of choice for lovers of fantasy. 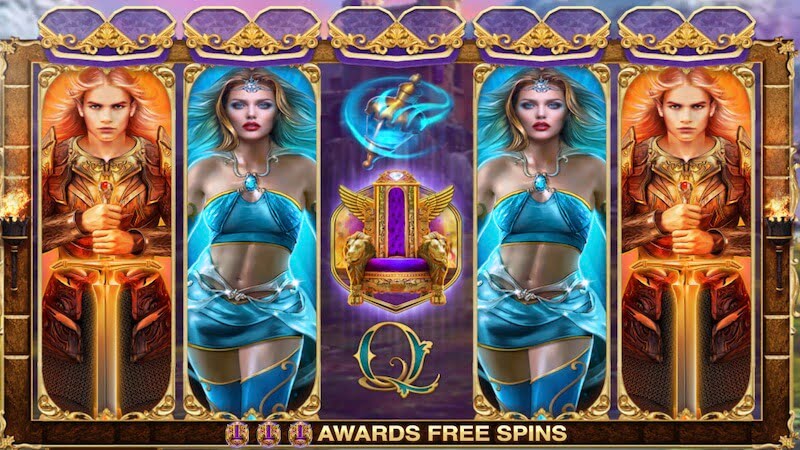 NetEnt’s Cash Noire is one of the most stylish releases of the first half of 2020. As the title suggests, this slot is themed around a private detective trying to solve a murder case, in the noire style popularized in films such as The Maltese Falcon and LA Confidential. Avalanche mechanics and mystery symbols keep things ticking along in the base game. To find the identity of the killer, you must land winning symbols within a red-framed crime zone that appears on the reels. Clues are collected on the pinboard on the left, and once you grab 13 of them, the free spins are triggered, with multipliers of up to 10x. Although the payouts are a little on the low side, the low variance, RTP of 96.05%, and engrossing storyline make Cash Noire perfect for all budding slot detectives.