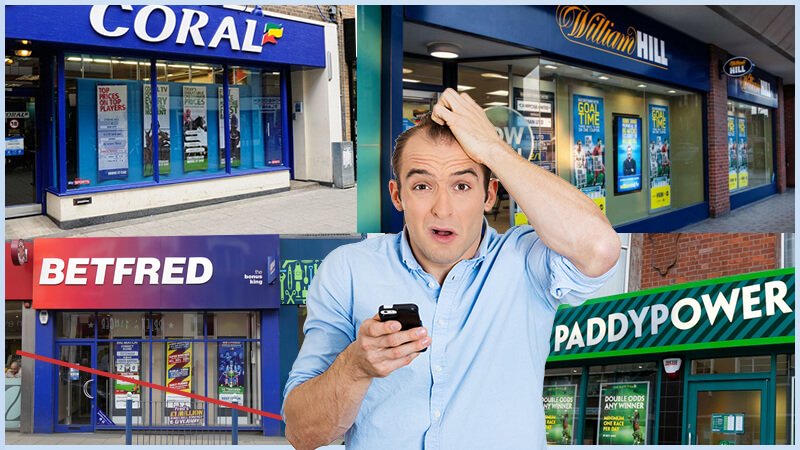 Where can sports betting fans find the best value odds when the high street bookmakers open up?

The short answer is: just stay away from Paddy Power.

For a longer (and a more data-driven) answer, read on….

Bookmakers open their doors again on the 15th June – just in time for the imminent restart of Premier League football.

But which bookies offer the best value betting odds for Britain’s most popular sport?

In the betting experiment below, we tried to provide an answer to this thorny question.

We studied the odds at the 5 biggest bookmakers with a significant high street presence – namely, William Hill, Ladbrokes, Coral, Paddy Power, and Betfred.

We measured the overall sets of odds on offer for matches in the popular 1X2 market, across all 5 bookies. Most importantly of all, we included the bookie’s overround (profit margin, vig, juice, or whatever you want to call it) into the equation.

After all, the smaller the bookie’s overround, the bigger the expected payout to customers.

Since the Premier League was still shut down while running our experiment, we looked for the next biggest football tournament on offer. After looking at the Nicaraguan, Belarussian and Czech leagues, we ended up choosing 6 crucial matches from the German Bundesliga.

It’s well known that betting interest/volume increases in the hours immediately before an event. So, we sampled each bookie’s odds as close to kick-off as possible (the middle of the Saturday afternoon), to ensure we were recording their most competitive prices.

We ran the odds through an overround/payout calculator and took the average of these numbers for each bookie.

Each of these bookmakers were then ranked by payout size, with the results presented below. 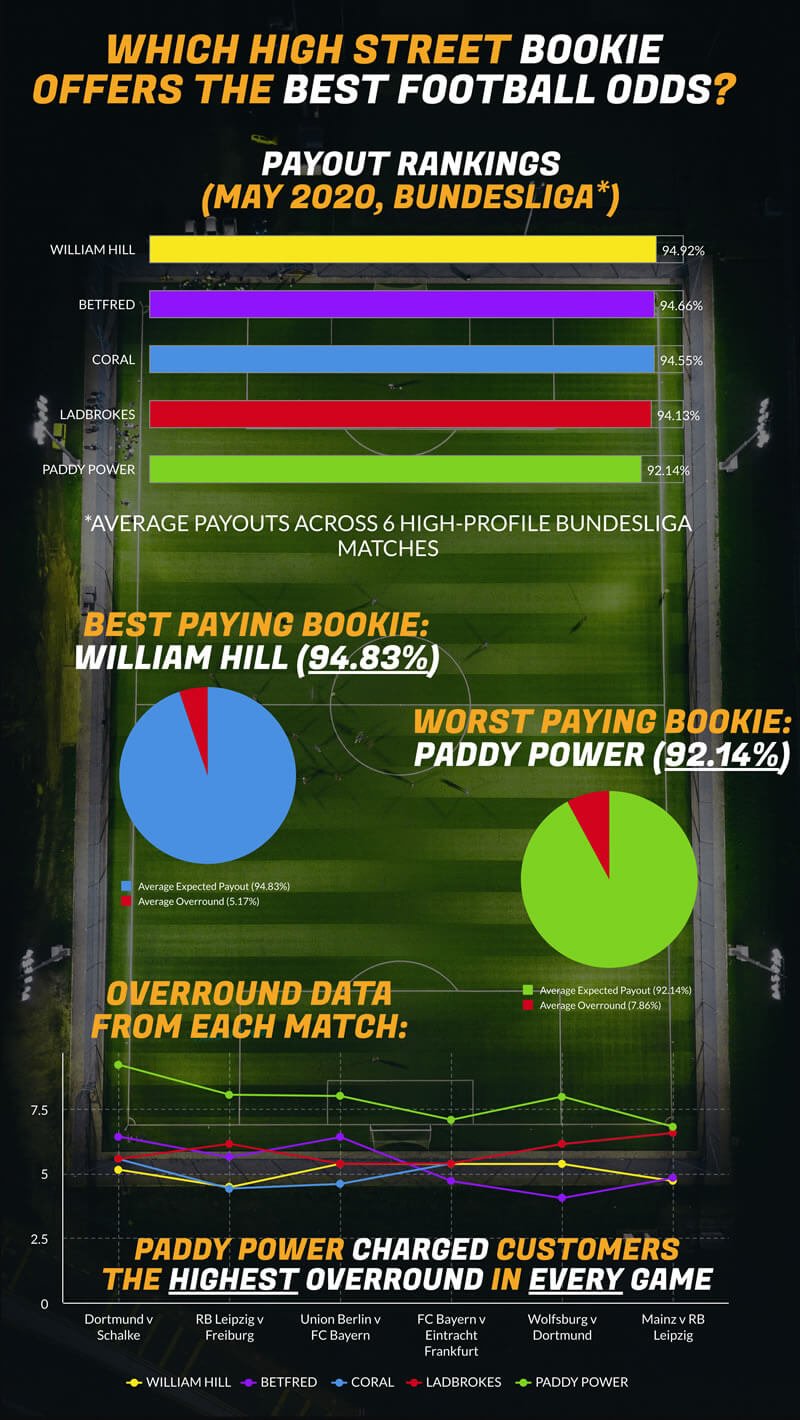 William Hill came out on top, with an expected average of 94.92% of stakes returned to customers. They were closely followed by Betfred, Coral, and Ladbrokes, who all managed to return more than 94% expected payouts to customers.

But the striking thing about these results is that it doesn’t make much difference which high street bookie you choose to bet at – as long as it’s not Paddy Power!

The Irish bookie could only be expected to pay out a measly 92.14% to football fans across these six matches.

Now, to be fair to Paddy Power, this experiment compared odds on the Bundesliga, which lags far behind the English Premier League in terms of betting interest, as well as betting volume.

But it’s equally true that at the time of this experiment, the German Bundesliga was the most-watched (and wagered) football competition on earth, with the Belarussian Premier League trailing far behind. Plus, we specifically chose the biggest games in the Bundesliga, all of which involved the 3 title contenders: Bayern Munich, Red Bull RasenBall Sport Leipzig, and Borussia Dortmund.

More research will be necessary at a later date, but if Paddy Power can’t offer competitive odds on these matches, then it’s unlikely to offer good value when the Premier League restarts.

And as for the small sample size, drilling down into the actual data shows that Paddy Power’s overall odds were the worst on every single game in the series – and it wasn’t even close.

The worst value from Paddy Power came on the Dortmund-Schalke game. This is a huge traditional derby in Germany, and at kick-off, Dortmund was well in contention for the title.

And yet, Paddy Power priced in a massive overround of 9.21% (an expected payout of just 90.79%) on the game, which seems a shocking way to treat punters – especially when William Hill was offering a full 4 percentage points in better-expected value.

Are these average payouts significantly different?

But should sports betting fans really care about a 92.14% average payout per game at Paddy Power versus 94.92% at William Hill? Isn’t this difference mere peanuts in the grand scheme of things?

Well, not really, no.

As any casino fan will tell you, a 2.78% difference in payout rates can build up into a significant sum over time. That’s partly why our slot reviews focus so much on Return-to-player (RTP) ratios.

Let’s run the math on this seemingly small difference in bookie payouts.

Let’s say you are really into German football betting, and you want to wager a small amount on every Bundesliga game over the course of a season – that’s 306 games in total. On each of these games, you decide to bet the minimum amount – which at Paddy Power, is presently £2 per game.

If we assume you predict the correct result just 50% of the time (and if you bet on the odds-on favourite on every game, this is a fairly reasonable assumption), then by betting at William Hill instead of Paddy Power, you stand to be £8.50 better off at the end of the Bundesliga season.

That £8.50 saving isn’t far off the amounts on offer as a bookie deposit bonus – in fact at the time of writing, Paddy Power offers just a £10 no-risk bet as a welcome offer.

And remember – that £8.50 assumes you only ever bet with minimum stakes.

If you bet at stakes higher than the minimum, and/or enjoy a higher win rate, then you will save a lot more than £8.50 over the course of a season, just by avoiding betting at Paddy Power.

The bottom line is that differences in overround/payout rates between bookies can have significant effects on your account balance. And the more you bet, the greater these differences are.

So which high-street bookie offers the best value football odds?

Although William Hill marginally finished ahead of Betfred, Coral and Ladbrokes, there wasn’t much in it. I suspect that if we ran this experiment on different days, then any member of this quartet could have come out on top.

Ideally, I would like to rerun this test once the EPL restarts – and also use a higher number of matches.

But assuming this data isn’t a giant fluke, the real takeaway of this experiment is that – unless you actively enjoy throwing money away – a switch from Paddy Power to basically any other high street bookie is a wise move for football punters.

Maybe it will do better when we sample average payouts on horse racing odds, which we will look at next month, before Royal Ascot on the 16th.