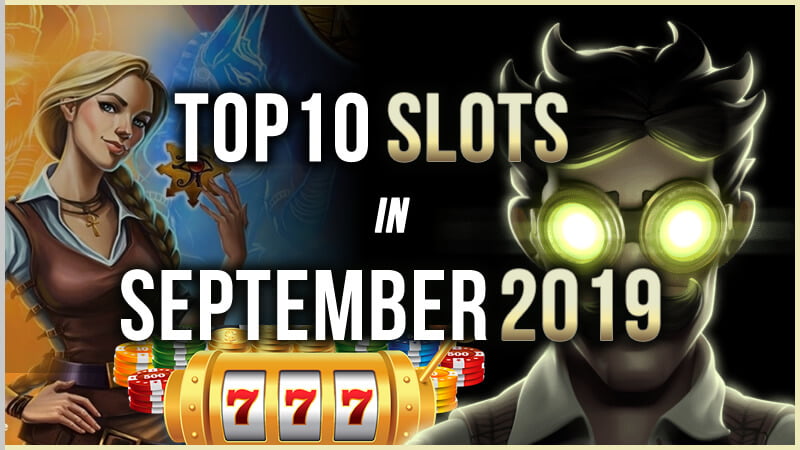 September was another exciting month for slots fans. There was a nice mix of innovative titles from up-and-coming developers, and a few high-profile releases from the big studios. Here are our top 10 slot games from September which you shouldn’t miss out on:

Mercy of the Gods

If there’s one thing that we can’t get enough of, it’s Egyptian-themed slots, so we were delighted when NetEnt released Mercy of the Gods. This one is basically a clone of the popular Divine Fortune slot, but with a slightly improved paytable, combining an exciting base game, some impressive bonus features and a progressive jackpot. The symbols are typical of the Egyptian genre, with scarabs, birds, and sarcophaguses aplenty, and the graphics are beautifully done. The best part of Mercy of the Gods is the Gift of Wealth jackpot game, which offers the chance to pick up some big rewards.

Rabcat’s most electrifying release of September was this tribute to the Serb-American inventor Nikola Tesla, who was reputed to be a bit of a gambler himself. The game is stunning to look at, and the dark and dingy laboratory is the perfect backdrop for the energy bursts of bright light when you trigger a bonus feature. Although this is a medium variance slot with 4100x max win, it’s perfect for some relaxed gaming. One nice touch is that Tesla himself occasionally wanders on set to check his calculations.

The little interactive TV troll Hugo has a few online slots to his name and Play’n GO released another strong entry in September. This time Hugo enjoys adventures underwater and up in the air, and you can follow the 200-year old creature by spinning the 3×5 grid, trying to line up symbols like the monkey repairman, eagle pilot, and Hugo himself. The Air Ace free spins game gives you the chance to win 5000 times your stake, and overall, this is a fun, exhilarating slot experience.

In Kingmaker, Big Time Gaming has produced a medieval-themed slot which has the potential to make you as rich as, well, a king. Kingmaker is a 5-reel slot with 16807 ways to win, an RTP of 96.65% and some insane multipliers (up to 10,000x) triggered both in bonus rounds and in the base game. With those kinds of numbers, you won’t be surprised to learn that Kingmaker is a high variance, highly volatile slot. That could get frustrating for a lot of people, but if you have the stomach for long stretches of dead spins, patiently waiting for an epic win, then there’s a lot to admire here. The backdrop of a fantastical Alpine castle is beautifully done, and the soundtrack is awesome too.

Low variance slots seem to have fallen out of fashion recently, as slot providers chase the current vogue for infrequent, big wins. But Habanero’s Colossal Gems shows that there is a space in the market for slot games that offer small, frequent wins. As the title suggests, the symbols are made up of colossal gems, and while the graphics aren’t the most advanced, the colour scheme is bright and easy on the eye. If you are tired of endlessly spinning the reels of high variance slots and getting nowhere, then Colossal Gems will restore your faith in the fun of slots.

Wolf Moon Rising is a typical nature-based slot game from Betsoft, but it has the potential to pay out a fair bit in the base game and in the free spins bonus rounds. The symbols include buffalo, cat, and eagle, as well as the wild. This wild symbol is the most valuable symbol if it falls in a winning combination paying out 10,000 times your stake if you are lucky enough to get 5 on the same payline. Although neither the graphics nor the music is anything special, the howling wolf which is triggered during the Fortune Under the Fool Moon feature is a rather nice addition.

No slot evening would be complete without an Irish-themed game, and at the end of the month, Playson released Clover Riches, a 5-reel, 3-row, 20-payline slot game. While it doesn’t exactly shake up the genre, Clover Riches has a very nice backdrop of a sunny meadow and a charming soundtrack. The symbols of the leprechaun, tankard of ale, horseshoe, and pot of gold are nicely done, if a little cliched. The only feature on offer is the free spins bonus, which is triggered by landing 3 bonus symbols in a row. Clover Riches is fun to play and if you feel like you have the luck of the Irish, it’s worth a spin.

NetEnt is currently expanding into Japan and China and is in the process of designing a series of games to appeal to those markets. The best of these so far is Imperial Riches, a beautiful-looking game set in a relaxing garden with ponds full of Koi Carp. The game makes full use of the avalanche engine first seen in Gonzo’s Quest. In terms of gameplay, it’s really simple, with a 5-reel, 15-payline set-up. The bonuses are even simpler, with one featured bonus split into 3 parts, the last of which is a jackpot round which can net you a decent win. While you probably will get bored of Imperial Riches quite quickly, this charming NetEnt title is definitely worth a few spins.

iSoftBet got its 2019 Halloween slot entry in early, and it’s not a bad game at all. You are invited to enter a haunted mansion and spin a 5×5 grid, with 3888 potential paylines. The wild ghost can swoop across the reels at any point to add extra wilds and increase your winnings. With a maximum win of 743 times your stake, this one is more ghosts than gold, to be perfectly honest. But if you are looking for a medium variance slot to play on Halloween, you can do a lot worse.

Kalamba Games might not be as well-known as its larger rivals, but I have a feeling that will change pretty sharpish. Especially if Kalamba can make more slots like Zombie Queen. The artwork and musical score are at the level you would expect from NetEnt, and with a creepy graveyard as its backdrop, this slot is out just in time for Halloween. The slot action itself is also a blast, including an option to buy the main bonus. It’s an intriguing idea – and I actually loved the fact that I could spice up a sequence of dead spins with a bonus round any time I wanted to. Zombie Queen is well worth checking out for this feature alone.

Did you enjoy any new releases in September which aren’t on this list? Let me know in the forum.