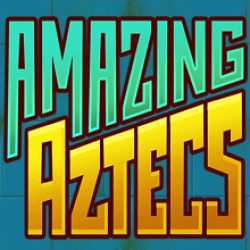 Amazing Aztecs slot is one of the latest to come from Microgaming and one of many slots to feature an Aztec theme. For those who don’t know, the Aztecs were an American Indian people native to Mexico that thrived from the 14th to 16th Century. The rule of the Aztec Empire ended with the Spanish Conquest during the 17th Century. It’s understandable why this theme has become so popular with slots, with a shroud of mystery surrounding what the  Empire was truly like, as well as their unique architecture which is easily translated into some good symbols and backgrounds for a slot design.

Speaking of the theme, Microgaming have done just that and incorporated some mysterious looking symbols along with friendly looking characters with bright colours to create a friendly theme but fails to really stand out. The graphics aren’t anything special like we’ve seen in other slots such as Hugo Goal slot, but they’re certainly sufficient for enjoyable gameplay. Moving onto the gameplay itself, you have a fairly typically 5×3 layout here with a generous RTP of 96.03%. This is a 243 ways to win setup, with the aim of getting a winning combination from left to right in order to win a prize of a bonus, of which there is unfortunately only one which I’ll get into shortly.

The base symbols in this game are as follows, listed in ascending order based on their value:

As I mentioned earlier, unfortunately there is only one bonus in this game:

Unfortunately, that just about sums up Amazing Aztecs slot. It’s disappointing that Microgaming and Just For The Win have only included a single, rather simple bonus with this slot. While the bonus itself isn’t bad and can reward you some decent payouts, it hardly makes for engaging gameplay and it feels a bit like little effort has been put into this slot. Even the graphics are pretty simple. In short, I can’t really recommend this slot and I don’t think there’s enough to convince many people to give it a go. With some extra features it could have been quite promising, but as it stands Amazing Aztecs is anything but amazing.