Centurion Maximus Payus is a Centurion themed slot from Inspired Gaming, carrying over the graphics and sounds of the original slot, whilst going in a slightly different direction in terms of game play. The slot is currently available to play in Betfred and William Hill betting shops on their fixed odds betting terminals, with the standard jackpot and maximum prize per game of £500.

What is unique about Centurion Maximus Payus is the lack of Fortune Spins, which have likely been taken away due to the upcoming stake change to £2 as proposed by the UK government, and expected to be implemented by 2020. Instead, Centurion Maximus Payus uses a Fortune Bet which adds a percentage of the stake for an increased chance of hitting the bonus, whilst everything else remains the same. So a £2 bet will have the same win values as the £1.60 stake, but the bonus scatter symbols will be doubled in height, increasing the chances of hitting the free spins bonus round. 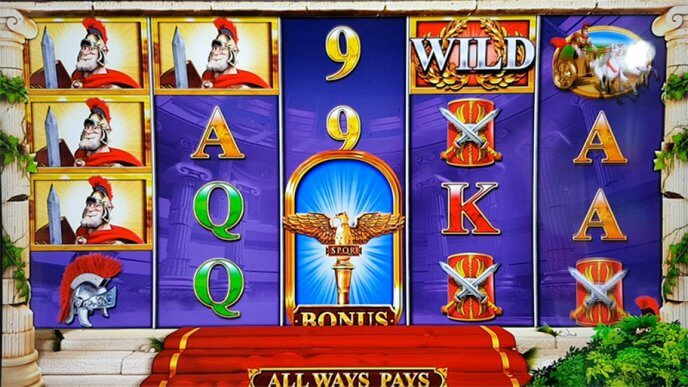 The stake options for Centurion Maximus Payus are:

The Fortune Bets will double the height of the bonus symbol only, whilst everything else remains the same. So you need to weigh up if it is worth playing Centurion Maximus Payus at £2 rather than £1.60 per spin. The extra 40p cost per game soon adds up and can get costly, especially as the bonus itself is often very low value. 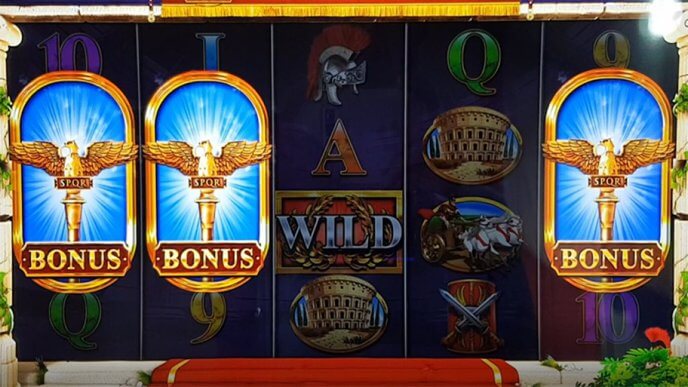 The game play is reasonably unique, especially for Inspired Gaming who usually stick to the same general format. There are five reels, each stacked four symbols high. There are no fixed win lines, instead, all ways pay from left to right, so it is possible to hit large clusters, but for the most part the wins will be very low.

There is no gamble option which is rather surprising, there is however the guy hiding in the bush which also features on both of the original slots; Centurion and Centurion Free Spins. He can randomly pop out and blow his trumpet, which will scroll down to show which bonus has been awarded.

Super Bonus Reels: The reels will darken and spin off, with an increased chance of landing three or more bonus scatter symbols.
Reelus Maximus: Three reels merge into one, which can result in a big win, or possibly nothing!
Big Win: As the name suggests, a big win is awarded. The big win can be anything from £20 upwards, so not always that big.
Five of a Kind: A five of a kind win will be awarded, with the potential of several more should a lucky shield be selected.

Unlike the older versions of this slot, Centurion Maximus Payus seems to award the random bonuses far less frequently.

Centurion Maximus Payus has a bonus round which comprises of a free spins bonus with multipliers and a good chance of multiple re-triggers.

After a few spins, you may recognise the way the bonus plays; it is an exact copy of the popular Raging Rhino slot. The Centurions are basically the Rhinos. As such, you won’t be too surprised that the value of the bonus is often very low. The Wild symbols can multiply the wins, but they are often few and far between. The video above is from my game play which had 18 free spins, with a total win of £11.60, and that was on the maximum of £2 stake. A bonus prior to that paid around £7, so don’t expect too much.

Centurion Maximus Payus is a very disappointing slot, it looks like it has good potential but never lives up to it. It’s available to play in the betting shops on the fixed odds betting terminals, but no online version is currently available.