Excalibur’s Choice slot is a new game from Barcrest although you could be forgiven for thinking it’s an older game. The graphics here are pretty poor and the amount of effort put into the appearance as a whole is clearly very minimal. This isn’t a game that’s trying to stand out for its appearance but instead, as you’ll find out, through it’s very exciting, although simple, Bonus. I’ll come onto that more shortly though.

The theme is based on the old story of Excalibur, the famous sword in the stone, and King Arthur. It’s quite a cool theme and the’ve used it to design some of the symbols, but there’s not much else they’ve used it for. It could quite easily be something completely different. You have a very simple 5×3 set of reels with only 10 paylines to use. That means that when you spin the reels, yo must get a winning combination from left to right along one of these lines using the following base symbols, ranked in ascending order based on their value:

While King Arthur may seem like the most appealing symbol in the game, and indeed it is the most valuable when in a winning combination, the Excalibur symbol is the most interesting. For a start, it serves as a Wild symbol which means it substitutes for all other symbols in a winning combination to help you get some extra wins. Not only that though, but it’s also the Scatter symbol and is used to trigger the Free Spins Bonus. 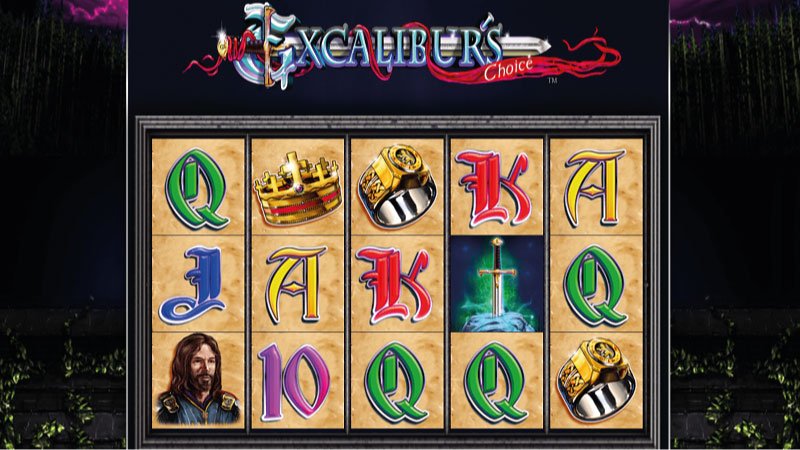 Free Spins Bonus. This requires 3 or more Scatter symbols to appear anywhere on the reels in any position to be triggered. You’ll then be awarded 10 free games, regardless of whether you manage to land more than 3 Scatter symbols. This Bonus gives you more than just free spins though, it gives you a special feature. You see, a symbol will be randomly selected from the ones I mentioned above, becoming a special symbol. Whenever this symbol lands on the reels during the free spins, it will expand all active lines. The value of the symbol will be the same as it is during the base game. In other words, a low-value symbol like 10, Jack or Queen won’t give you too many big wins, but a symbol like King Arthur or even the Castle symbol could provide you with some very big wins. It’s worth noting you can also retrigger the Bonus in the same way as it was triggered in the first place. 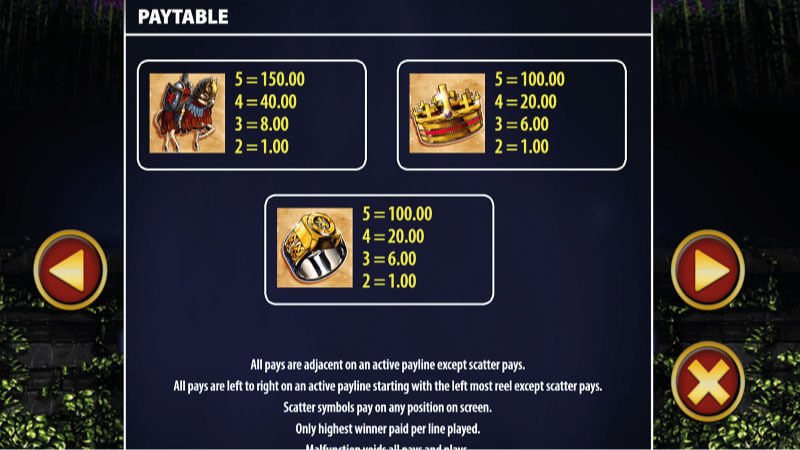 Excalibur’s Choice slot from Barcrest isn’t trying to be a fancy slot with excellent graphics, crazy animations and lots of features. There are plenty of slots out there already like that because that’s what the trend is going towards. No, instead Barcrest have simply gone and said here’s a slot with one Bonus, but it’s a very good one and can pay you a lot of money. The result? Well, it’s a slot that can make you a lot of money in a short amount of time and the Bonus is indeed great, but I have to say that playing the slot long term is a bit dull. That’s the trade off when you go so simple. Don’t get me wrong, I like it a lot and definitely recommend it, especially after a slew of slots reviewed recently like Chicken Fox slot that just haven’t had very good Bonuses, but it’s not going to be a game you play for long periods of time. Let us know what you think down in the comments section below.

A Simple Slot With One Bonus