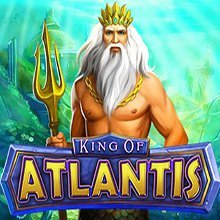 King of Atlantis slot is an IGT slot game released in May 2017, though the graphics make it seem as if the slot was released a while ago, but this is IGT’s style, all of their slots look like this. The game has five reels and five rows, and features a Greek gods theme with Poseidon as the central character and the king of the lost world of Atlantis.

There are 40 fixed paylines in the King of Atlantis slot and your bet can range from £0.40 to £80, and that’s the price for the game with 20 Wilds. For 40 Wilds, your bet will be anything between £0.65 to £1,300. If you want the best of the best, a game with 60 Wilds, you can get that for a minimum of £0.90 and the game will let you stake incredible £1,800 per spin.
The most recognisable thing about the King of Atlantis slot are its gigantic wild symbols. King of Atlantis Gigantic Wild covers all five rows and two reels, and it appears on reels 2-3 and 4-5 only. It substitutes for all symbols except Scatter. You can change the number of these Wilds on your reels, 20, 40 or 60, and this will decrease or increase your cost per spin as described above. 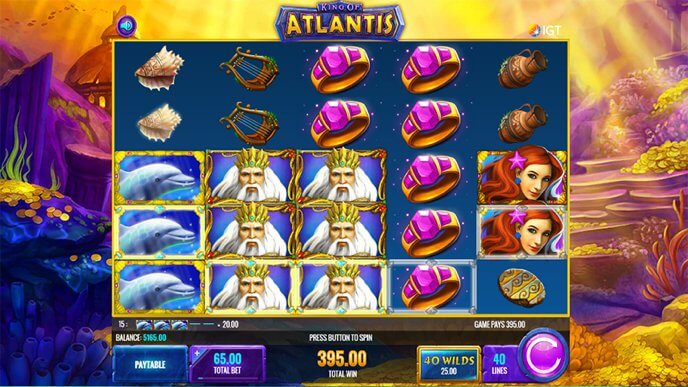 The King of Atlantis slot has a bonus scatter symbol that appears on reel 1 during base game only, and if it’s combined with a Gigantic Wild, it triggers the Poseidon Free Spins bonus. You’ll get 8 free spins, and the reel positions with Wild symbols that triggered the feature in the first place will stay Wild for the duration of free spins. This means there’s a chance of a huge payout during this only bonus game in the King of Atlantis slot.

Two main symbols are Mermaid and Dolphin, and they pay 2x or 4x more than the other six symbols in the game: Crown, Ring, Harp, Amphora, Shell and Stone. All the symbols are nicely drawn, though in the retro classic slot style which IGT are known for, and they are stacked so you’ll get a number of them appearing in series on reels.
In the information box on the game itself it is stated that the theoretical return to player can range from 92.01% to 96.14%. It isn’t explicitly stated, but the RTP probably rises with the number of Wilds on reels. In any case, the average RTP is probably around 94% or 95% most of the time. This isn’t too good and is inferior to many other slot games.

Overall, players love this slot game and think it’s among the best IGT titles in a while. The best part about this slot game are definitely the Gigantic Wilds which can produce huge wins, especially during the free spins game. This game has high variance and will mostly be enjoyed by those with deeper pockets, but it also offers a chance of a major payout.