Pirates’ Plenty The Sunken Treasure slot comes to you from Red Tiger Gaming and once again offers beautiful graphics with a fun theme and a good selection of features. I think this slot has a bit of something for everyone but is certainly more suited towards a certain type of player as I’ll discuss below.

Firstly, let’s talk about the design. The pirate’s theme is a pretty common one and for good reason; who doesn’t enjoy finding some treasure on a ship while sailing the seven seas? Not all of them do it justice though, but Red Tiger Gaming have certainly put the time and effort into making this slot look great. The detail is incredible and the setting inside a cabin full of gold with dim lights looks great. 10/10 here. You have a 5×3 set of reels with a nice golden border which offer 20 paylines. Your job, if you want to find the treasure, is to get a winning combination from left to right using the base symbols. These can give you a cash reward or you can also win a feature as I’ll discuss in detail below. These base symbols are listed as follows, ranked in ascending order based on their value:

These are just the base symbols that pay for instant wins but there are other symbols in the game. Namely the Wild symbols of which there are 4 for each of the card symbols. They substitute for all of the paying symbols in the game, but only appear during the Ocean Spins after you unlock treasure chests. 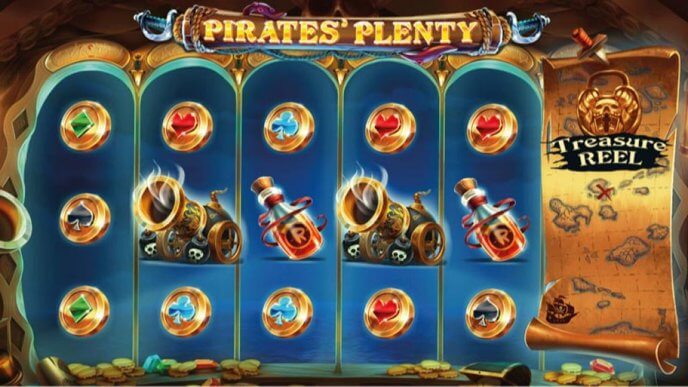 Wild Ships. Pirates’ Plenty The Sunken Treasure slot also has special Wild symbols which can cover an entire reel. Furthermore, they can come with multipliers up to 5x for even bigger wins. They substitute for all paying symbol of course and will only appear when the Treasure Reel is unlocked.

Ocean Ships. This is the main feature of the game, triggered by 3 of the Ocean Spins Scatter symbols and will award you with free spins. You’ll be awarded keys which are used to unlock the sunken treasure chests. These can help you win more free spins and can also turn the card symbol into Wild symbols for some extra wins.

Wild Monkey. There’s a final Wild symbol in this game known as the Wild Monkey. It’s able to steal low paying symbols and trigger a respin with only the high-value symbols. He also substitutes for all other paying symbols in a winning combination and can appear on any spin apart from during the Ocean Spins. 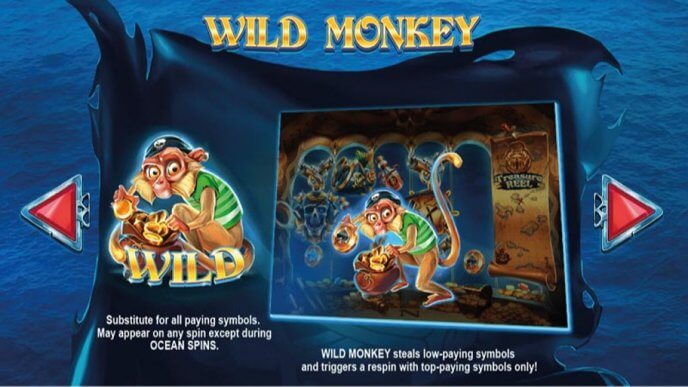 Pirates Plenty The Sunken Treasure slot from Red Tiger Gaming is another game from them to offer great graphics and some fun features, but do they add up to make a great game? Well, it depends what you’re looking for. This is a game with a unique design, some fun features that pay pretty well and quite regularly but doesn’t really offer any massive wins. The extra Wilds with multipliers can be pretty profitable, but there are other slots out there like Dragon Maiden slot that can pay even more on a single spin. In short, if you prefer smaller but more regular payouts, in other words, a lower variance slot, this one is a great choice, but for those of you with a bigger budget looking for big wins, you might want to check elsewhere. Be sure to leave a comment down below and let us know what you think.