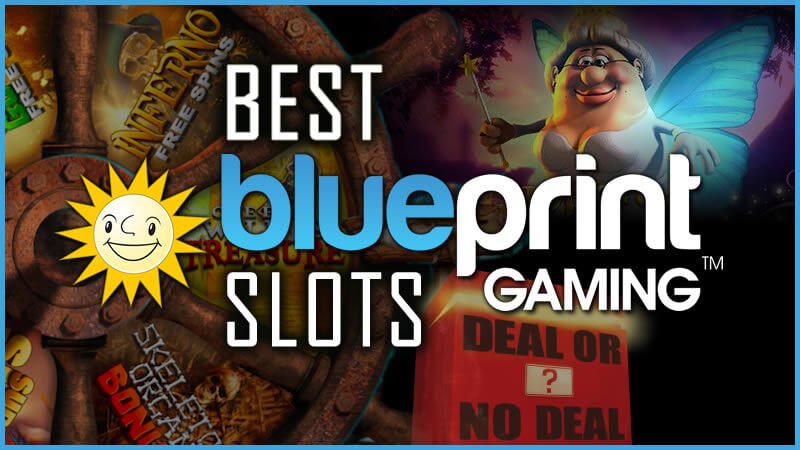 Blueprint Gaming is an Atlanta-based slot developer that makes games for both the offline and online market. Their games have always been highly admired for their fun themes and riotous colour schemes. And in recent years, Blueprint has fully embraced the megaways technology of BTG. Blueprint often converts their old favourites into intriguing and exciting slots worthy of the modern age, as well as bringing out totally new slots much loved by casino fans. Here are seven of the best Blueprint Gaming slots of all time.

Wish Upon a Jackpot Megaways

Blueprint first released Wish Upon a Jackpot back in 2013 and updated it for the Megaways age earlier this year. The fairy-tale-themed slot keeps the same charm as the original, but speeds things up a notch, as well as raises the RTP. Wish Upon a Jackpot Megaways has a mesmerizing design and an enchanting soundtrack, with symbols including glass slippers and castles. There are four bonus features in this slot, with the first two adding wilds to the base game. The Magic Beanstalk stacked wilds come with multipliers of up to 7x, while the Pigs Can Fly randomly appears and sprinkles wilds across the reels. A golden arrow mystery symbol feature adds up to 100 symbols, and of course, the Fairy Godmother Free Spins are in play too, which come with unlimited multipliers on each cascade, extra spins, and a 50,000x max payout. While Wish Upon a Jackpot is a volatile slot, the charming theme makes those big wins worth the wait.

The fast-paced Safari Gold Megaways slot is the perfect example of what makes these multiways games so thrilling. The 6 reels, with varying rows, produce no less than 117,649 ways, while the symbols include typical safari animals such as the cheetah, elephant, and buffalo with the lion paying out the most. Four or more scatters trigger the bonus round, and first, you are invited to spin a wheel to define your starting multiplier and number of free spins. If you are lucky enough to play the bonus round with a high number and a high starting multiplier, then this slot can pay out massively, making it appealing for slot veterans and big win hunters alike. Although Safari Gold Megaways is admittedly a highly volatile slot, the exciting gameplay and theme make it fun even for casual gamers.

Buffalo Rising All Action slot is Blueprint’s rather clever attempt to sidestep UKGC restrictions on buying bonus rounds. To get around this ban on bonus buys, the entire slot is made up of a bonus round. You start off choosing your bet size and how you want to play the bonus, with a choice of 15 free spins starting at a 1x multiplier, 10 free spins with a 5x multiplier, or 5 free spins at a 10x multiplier. Or for those of you who feel daring enough, there is a mystery option which goes up to 15 free spins and a multiplier which starts at 10x. Whichever method you end up playing, the objective is the same – to build a series of wins, which leads to more cascading respins, and a higher multiplier. It’s not exactly rocket science, but if you only get excited by bonus rounds, then Blueprint has found the perfect solution. At the time of writing, it hasn’t been banned in the UK yet.

Blueprint’s Pig Wizard is a ridiculously fun series of slots which combines wizardry and, well, pigs. Fans of the genre have quickly taken the megaways version to their hearts. There are 6 reels and 15,625 ways to win in Pig Wizard Megaways, and the action is sped along by a scary musical score, a mysterious mirror to the left of the reels, and 3 exciting Mystery Mirror features in the base game. The Spinnus Repeatum creates wins by matching symbols with the one in the mirror, with each win leading to a respin. The Magical Win Spin adds wilds or mystery symbols for guaranteed wins, while the Winnus Revealo turns losing spins into winning ones, or upgrades winning spins. The biggest wins, of course, come in the free spins round, and here too the Mystery Mirror comes into play, leading to some truly impressive payouts.

Thundercats was a popular animated cartoon series a few years back, and this Blueprint slot perfectly captures the fun and excitement of these catlike humanoids as they fight off evildoers. The game itself is simple on the surface, with 3 rows, 5 reels, and 20 paylines. Symbols include nunchakus, surfboards, and swords, all designed in the same glorious style as the series itself. There are features aplenty, with no less than 10 in the base game which can be randomly triggered. The best of these is perhaps the Wilycat feature, which adds mystery symbols to the reels, and the snarf feature, which adds bonus symbols – increasing your chances of triggering the main bonus. And even this is an interesting one since you first spin a wheel and end up with one of six bonuses – including two free spins features. The Ultimate Thunder Bonus with a 10x multiplier is the one to aim for, as it gives the chance to win 10,000x your stake.

The Goonies was an ‘80s film classic which has been the inspiration for dozens of movies and TV shows (most recently, Stranger Things). Blueprint’s Goonies is much-loved by the slot streaming community. Whenever a streamer asks for requests, that yell of “hey, you guys” is rarely far away. What makes Goonies slot such a favourite? The way Blueprint has meshed the film theme and design with the gameplay is part of it. This is particularly true when it comes to features. One-eyed Willy’s Riches features include Chunk’s Truffle Shuffle, turning random symbols into wilds, and Mikey’s Hidden Treasure feature, with 5 stacked wilds ensuring big wins. One-eyed Willy’s Treasure Bonus gives you the chance to win up to 500x your stake, and to round it all off, the base game comes with a Jackpot King feature.

Wish Upon a Leprechaun Megaways

As the name suggests, Wish Upon a Leprechaun Megaways is an Irish-themed slot, with literally every clover-laden cliché thrown into the mix. In this Blueprint slot, you will find horseshoes, green hats, and cauldrons full of gold as symbols, while a jaunty Irish fiddler entertains in the background. The mystery symbol is represented by a four-leafed clover, which transforms into a random symbol to make the base game fun and exciting. Features wise, the leprechaun certainly delivers. The Rainbow respin turns losing spins into winning ones, while 3 cauldron scatters trigger the free spins bonus. Here you can take a 50/50 gamble on up to 50 extra free spins, and a multiplier is added to your winnings after every cascading win. It might be garish and even kitsch, but if you are looking for some Irish fun, Wish Upon a Leprechaun Megaways definitely hits the spot.

Which of these Blueprint slots do you like the best? Do you enjoy playing their newer Megaways titles, or do you prefer their older classics?