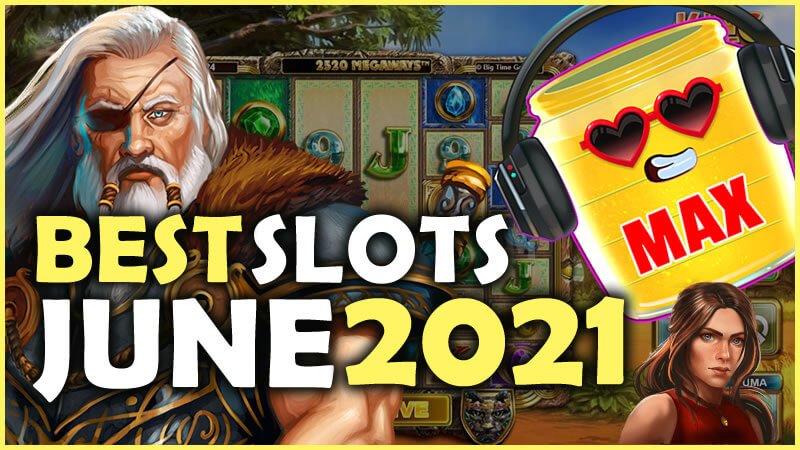 We have now passed the halfway mark of 2021, and June has come and gone. Which slot releases were worth playing last month? Did Jammin’ Jars 2 please fruity slot fans? Read on to find out.

Just For The Win’s Elven Gold combines a fantasy theme with scatter-focused gameplay. And although it won’t win any prizes for design innovation, it still has enough to please slot fans, especially due to the high payout potential. The most interesting symbol is the scatter, which pays out 15,000x when 12 of them land, even in the base game. The free spins are triggered in the standard way, and in this feature, the scatters are collected, giving you another chance to hit a big win.

This charming little slot by Kalamba sees us enter a gemstone-stuffed bank vault populated by friendly goblins. The base game has several features to keep players occupied, triggered by collecting gemstone symbols. But as always, the bigger wins are found in the free spins feature, where you can choose between modifiers. It’s an extremely volatile casino game, with wins of almost 40,000x your stake, and the Harry Potter-esque theme will appeal to many slot fans.

Play n’ Go continues to flog the dead horse of Book of Dead/Wilde Family slots, this time following the female explorer Cat as she explores the Great Pyramid. The backdrop looks identical to all “Book of” slots, as do the symbol set, which is made up of scarabs, Ankhs, head of Anubis, and the explorer herself (1000x for five of a kind). Once again, expanding symbols play a key role. So, what’s so different here? Not a lot. But fans of these kinds of games (and there are millions of them) will lap it all up.

Playtech’s latest Norse Gods slot sees the studio come up with a title that has the look of a Hollywood blockbuster (or at least a top-drawer video game). Loki, Freya, Odin and Thor all make appearances as symbols, and I have to say they look fabulous. The features (and there are many) are all triggered by unlocking the Legends of Asgard (you require 3 scatters in a single spin). From there you choose between a picking game with a cash prize, and various free spin rounds, such as the Freya Free Games, with 10 spins with a stacked wild on reel 3. The main way to make serious cash is via the network of Playtech jackpots, with the largest of them starting at £100,000.

The most eagerly anticipated slot of the month, Jammin Jars 2 sees Push Gaming meet fan expectations with a slot that is as exciting and as colourful as the original. Once again it is a cluster pays game set on an 8×8 grid, with tasty-looking fruits such as blueberries, grapes, and tomatoes ripe for spinning. Instant prizes, gold vinyl symbols collected in a Gigajar, and a fruit blast feature where giant symbols land following a cascade all help build steady wins in the base game. The free spins offer payouts of 50,000x. Expect to see the slot streamers play Jammin Jars 2 for the rest of the year.

BTG’s Bonanza is one of the most influential slots of all time, and this time around we also have a jackpot to play with. The theme is the same, with a Country & Western vibe, a rocky backdrop, and a waterfall promising big wins. The main addition are progressive jackpots, where Megapays symbols are collected, and 15 or more of these symbols result in a win of 3,000,000xyour stake. Although this version of the slot classic has a slightly lower RTP than the rest (due to the jackpot), big win hunters won’t be put off, given that a mammoth 3,000,000x payout is possible with the jackpot.

Iron Dog has come up with the prettiest slot of the month, thanks to the alien-themed Astro Newts, which gives 117,649 ways to win. It’s a bright and colourful slot with 6 reels, filled with the cutest extra-terrestrials since Reactoonz. Expanding wilds, a mega-fission feature (where winning symbols of a height of 3 or more split in two, producing more ways to win), and a free spins bonus where you collect fuel to travel to new planets make Astro Newts a fun slot with high potential (20,000x max win).

Play n’ Go’s latest gems-themed slot is a simple 5-reel affair but has a nice clean look which fans of classic slots will appreciate. 5 reels and 3 rows are topped with a special multiplier row, which boosts wins on cascades by up to 343x. The best aspect of this is that these multipliers carry over into the free spins, meaning wins of 30,000x are possible. Simple, but so effective.

Big Time Gaming’s King of Cats explores the world of big cats. These aren’t your timid neighbourhood tabbies – instead, we take on lions and pumas in the hunt for riches. Will these magnificent beasts help you secure a max win of 56,000x? Or will they scratch you so hard you bleed? Well first of all you must choose to take on one of the two cats in the base game – high-payout lions or lower variance pumas – each of which come with their own features, such as multiplier wilds for the lions, and puma full reel wilds. These two variants also cross over into the bonus round, where the big wins of 56,000x are to be found.

No month would be complete without a Megaways reboot, and this time around, it’s the turn of StakeLogic’s ever-popular Black Gold to get an upgrade to 117,649 paylines. The symbols are made up of objects typically associated with oil prospecting, and include lanterns, helmets, and donkeys, with the man paying out the highest, as well as multiplier wilds and a scatter. Like all megaways slots, this one has a cascade mechanic, and the bonus feature awards up to 15 free spins, with an incremental multiplier thrown in. It’s a good slot, heavy on the features, and fans of the original will certainly enjoy it.

So that was it for June 2021. Ten slots received ratings of 8 or higher, with the Jammin Jars sequel, a Megaways version of Black Gold, and another Cat Wilde title for Play n’ Go keeping slot fans happy.