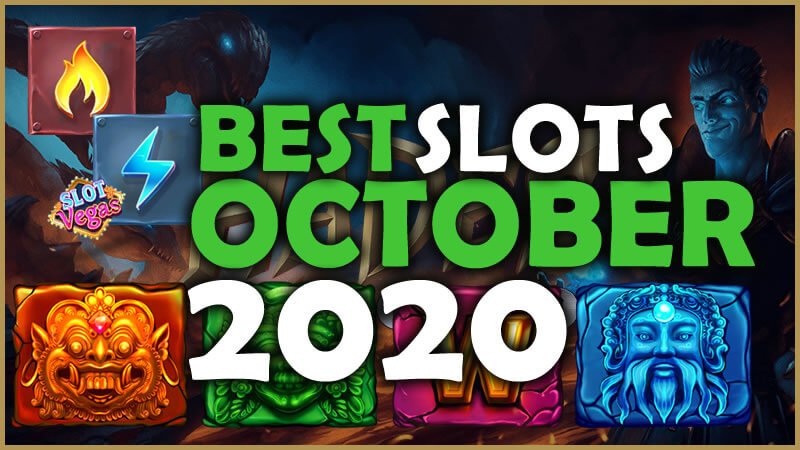 The slot world had a slightly disappointing summer in terms of excitement and innovation. We are pleased to report that it came roaring back to form in October. Our reviewers found 11 slots that deserved a rating of 8 or higher. Read on to see which slots made us smile last month.

Red Tiger’s Thor’s Vengeance slot is yet another Nordic-themed casino game. While this genre may have been done to death in 2020, Thor’s Vengeance is one of the more impressive releases. The action takes place on a 6×4 grid in a Viking temple, with symbols including trees, cats, and Thor himself, who also dominates most of the features. For example, the randomly triggered Thor’s Lightning removes low-paying symbols or adds wilds. Thor’s Hammer can award you up to 20x multipliers, while Thor’s Generosity adds a third scatter to the reels, which is enough to trigger 8 free spins. In this main bonus, growing multipliers will be your route to big wins, which go as high as 5249x.

Gems Bonanza by Pragamatic Play is a simple but effective gemstone-themed slot set on an 8×8 grid, with the purple and red gems paying out the highest. The game makes full use of Pragmatic Play’s Tumble and Cluster Pays features, meaning you can trigger multiple wins on a single spin, and you don’t need to rely on traditional lines to form these wins. What’s more, symbols in the base game often are assigned coloured markings behind them, and if that symbol is involved in a win, added features come into play. For example, blue marked winning symbols trigger the nuclear feature, which sees the screen cleared of all symbols and a new (effectively free) spin awarded. There are several more of these nice little features to keep the base game interesting, as well as an engrossing bonus round called the Gold Progressive involving a 10x multiplier in its final level. We like how the Gold Progressive is triggered too, as you build up to it by collecting the symbols removed during the tumbles (and not triggered randomly as on most slots). Although Gems Bonanza will never win any design innovation awards, it’s the kind of slot that wins fans over due to its exciting gameplay.

No month would be complete without a new release from NetEnt, and Vegas Night Life sees the studio enter the bling niche once again. The 5 reels and 3 rows have a backdrop of the Vegas strip at night, with symbols made up of rings, watches, cars, and champagne bottles. If you like the luxury look, then you will be hooked on this slot. But even those of you not into tackiness can enjoy the fast-paced, feature-packed action of Vegas Night Life. These features are all triggered by landing 3 scatters (in the shape of poker chips). You pick one of them to reveal the feature, which may be a free spins bonus with a 3x multiplier on all wins, an instant win, or a cash stacker. This latter feature sees you play for a mega jackpot, in the style of Mega Fortune.

The cleverest Halloween slot of the month is Kalamba’s Ducks Till Dawn. Although the title may be inspired by the 90’s heist/vampire thriller starring George Clooney, the slot is set in a carnival shooting stall, with 6 reels, 4 rows, and symbols comprising balloons, creepy dolls, stuffed monkeys, and a sorcerer with a crystal ball acting as a wild. In the base game, the big wins come when you line up the crosshairs with one of several rubber ducks, which move from right to left. A cash prize is awarded for every duck shot, and if you manage to hit 6 ducks in a row, you receive a massive 200x multiplier. There’s a free spins round too, and interestingly, you accumulate the number of free spins awarded throughout the game, so the longer it takes to trigger, the more potentially profitable it is. Ducks Till Dawn is a creepy little slot, perfect for the witching season.

This slot from Big Time Gaming is as crazy as Vegas itself. It utilizes the studio’s new Megaquads mechanic which sees 4 sets of reels spinning at the same time. You accumulate multipliers to the left of the reels, while you wait for the free spins to get triggered, and the longer this takes, the bigger the payout potential – which maxes out at an amazing 45,000x. We wonder if the Megaquads mechanic will one day prove to be as popular as Megaways has been. The soundtrack is also worth noting. Somewhere over the Rainbow, She’ll Be Coming Around the Mountain and other classics add to the Western feel, making this slot the next best thing to playing in Caesar’s Palace itself.

This jungle-themed slot from Nolimit City certainly looks the part, as the action takes place in a dense forest, between 2 stone statue heads. A 6×6 grid sees symbols tumbling down, and the xPays mechanic kicks in here. It’s kind of like a reversed avalanche mechanic, as losing symbols from winning symbols are removed before a respin occurs. You can build up impressive wins in the base game in this way, as well as from giant symbols with up to 500x multipliers. In the free spins, a sticky vine multiplier is added to the xPays to produce even bigger wins.

Fantasma’s Twisted Turbine slot is a really innovative title. Visually, the game has a truly unique 5-3-1-3-5 grid, as the middle 3 reels are bookended by two robots. As you might expect, having just one symbol in the middle reels reduces your chances of forming a winning combination. On the other hand, Fantasma has gone for a win-all-ways mechanic which means there are in fact 225 ways to win. What’s more, consecutive wins – when they do come – lead to insanely large payouts. This carries over to the free spins round too, with the potential of 10,000x payouts. It’s highly volatile, of course, but could prove a hit with big win hunters.

Thunderkick has produced a fantastical fantasy slot in Crystal Quest Deep Jungle, where we follow the adventures of a female explorer into the forest to hunt for big wins. This game comes with a simple 6-reel, 4-row grid with symbols made up of crystals and the high-paying snake and monkey. It’s also an avalanche slot, with each win leading to another spin, and for each of these that happen consecutively, a multiplier goes up by 1x. Three or more scatters trigger the free spins round, and here the multiplier never resets after a losing spin, leading to the biggest wins in the game – since those multipliers are unlimited. The game is a lot of fun, and we personally love the way the explorer suggestively arches her eyebrows as she grasps the crystals after a big win.

Yggdrasil’s Hades Gigablox takes us to the underworld, which – according to Greek mythology – is ruled over by Hades. He stands to the right of the 6 reels, making wisecracks about the concept of death, while a soundtrack of hard rock and dance music plays in the background. It’s a beautifully designed slot, with symbols made up of various monsters. Of course, the base game is all about those Gigablox, and they feature in every spin, with the potential for some epic wins, as these giant symbols can connect with other smaller symbols to produce impressive paylines. The Hades Wild Hunt feature sees the king of the underworld leap onto the reels and defeat all the monster symbols, turning them all wild. A free spins round come with increasing multipliers of up to 10x, and a maximum win of 9000x, giving Hades Gigablox the biggest payout potential of this year’s Halloween slots.

Elk’s first slot which made our top list, Black River Gold is a visually stunning title set in Alaska during the gold rush era. Several bade game features offer the potential for impressive wins. For example, Revolver big symbols absorb smaller symbols and become wild when full, while symbols connected across the same payline by a compass symbol become wild. The bonus feature is triggered by landing 3 or more scatters. Three of them provide you with 10 free spins, 4 scatters give 15 free spins, 5 scatters give 20 free spins, and 6 scatters give an amazing 25 free spins. In this bonus, wild symbols are collected until the spin is over, becoming sticky until they form part of a win.

Elk managed to get two slots in this month’s list, and the second is the cartoon alien-themed Visitors slot. It has a fun, friendly vibe, with an EDM soundtrack, symbols made up of colourful houses, while the scatter is represented by a flying saucer. The gameplay is mostly centred on respins, triggered when the little green man symbol lands on reels 1 and 5 simultaneously. Depending on the eye colour, one of three modifiers is applied to the following respin. For example, the pink colour adds up to 5 sticky wilds to the reels, while yellow adds a 15x multiplier to any win. Best of all, the free spins round on Visitors comes with up to 10,000x payouts, thanks to insanely generous multipliers. This slot should appeal to big win hunters as well as fans of UFO’s, and we can see it becoming popular among the streaming community.

And there you have it – another month of new slot releases is complete, and it’s good to see the studios come up with innovations in terms of mechanics and gameplay. Will BTG’s Megaquads prove as influential as their Megaways mechanic? We will probably have to wait until 2021 to see if that bears fruit. Now it’s time to look out for early Christmas releases!