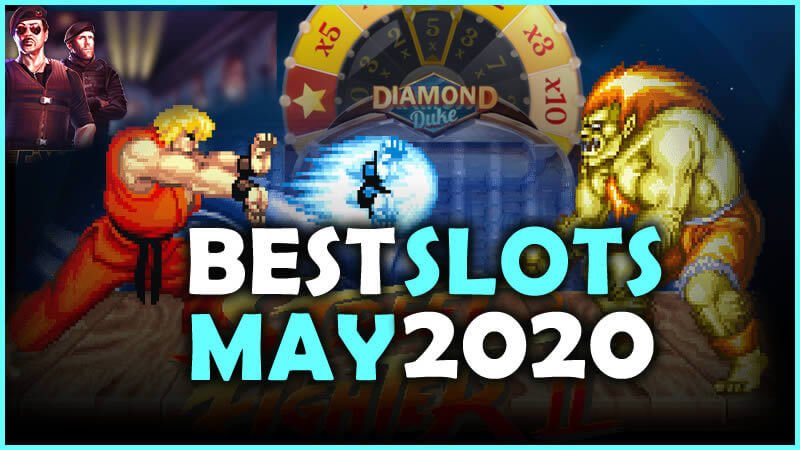 The first four months of 2020 have seen slot developers design ever more clever casino games, weaving themes and game mechanics together to produce highly entertaining slots. So, what do we have in store for May? A first look at NetEnt’s Infinireels mechanic, another couple of 90’s nostalgia trips, and the usual helping of Megaways titles. Let’s have a look.

Quickspin’s Diamond Duke is a retro-looking slot with a ‘20s jazz soundtrack. The 3×3 grid comprises classic symbols such as fruit, bells and lucky 7’s, with the diamond symbol paying out the most, at 160x for 3 of a kind. Despite the pared-down initial look, Diamond Duke does have a number of bells and whistles which bring it into the modern age. For example, the spinning multiplier wheel sitting above the main slot is brought into play by landing 2 or more scatters. You can win anything between 2-10x multipliers, or a fun 3-stage pick and click bonus game. Diamond Duke is insanely volatile, and you will have to be patient waiting for those big wins, but those who stick with it will be rewarded. Especially those who pine for years gone by.

NetEnt’s first example of their new Infinireels mechanic is an intriguing and exciting peek into what could be the next big thing in slots. Infinireels is like a horizontal version of their avalanche feature – with each win in the base game adding another reel to the grid (instead of another row). Like its avalanche cousin, this mechanic allows for bigger wins and increasing excitement in the base game, and it’s just as much fun. Theme wise, Gods of Gold Infireels might not be ground-breaking. It appears to be inspired by the Arabian Nights tales, with a Middle Eastern soundtrack, various masked characters, and amulets. When a winning sequence comes to an end, a respin may randomly trigger where a genie guarantees you some kind of win, and there are 10 free spins whenever you land 3 scatters. This is a very promising start to the Infinereels series of games, and we can’t wait to see where this goes.

Play n’ Go’s Agent Destiny is a fun-packed cartoon-style adventure, which reminded us of NetEnt’s Jack Hammer series. The 5-reel, 3-row grid is made up of colourful symbols such as male and female spies, what appears to be a mad scientist, and the wild symbol is a safe, which is by far and away the highest paying. Mega symbols cover entire reels and lead to bigger wins in the base game – 5 of them will bag you 60x your stake, and linked reels add to the fun. There’s a free spins round too, and again the linked reels feature combine to drastically increases the win potential. That said, Agent Destiny comes with a max payout of just 5000x. However, this is a highly entertaining and beautifully-drawn slot that will appeal to fans of the spy genre, as well as comic book fans.

Retro video-game themed slots are the latest thing, it seems, and Relax Gaming has released a corker in Hellcatraz. The pixelated graphics and synth soundtrack will appeal to all of us who enjoyed a misspent youth in 90’s video arcades. This 6-reel, 6 row slot takes place in the Alacatraz prison in San Francisco Bay, with premium symbols made up of sharks, guards, handcuffs, and prisoners. The base game has cascading reels and two modes – a mixed mode and a lockdown mode – which influence the use of mystery symbols as well as the volatility. To trigger the free spins, keys are collected in a meter on the left. You need to collect 2000 of these – which obviously takes quite a while to do. However, the wait could well be worth it, since the max payout of 51,000x on Hellcatraz slot will attract hardened casino veterans as well as fans of prison escape movies.

Leander’s Wild West Zone slot is a clever take on this sometimes-overused theme. The unique reel set-up means that every reel has its own zone which changes size and position on each spin, with only the symbols landing in the active zone paying out. What does that mean for ways to win? Well this changes too on each spin – from 243 all the way up to 3125 ways to win. This mechanic looks beautiful in action, as do the symbols themselves, including boots, candles, sticks of dynamite and the badge – which pays out the highest of all of them. Wild West Zone also comes jam-packed with interesting and fairly unique features. Any wilds which land in a zone without triggering a win lead to a respin with multipliers attached. And the Something for Nothing feature builds multipliers in the base game which you can later take advantage of in the Free Spins round. This bonus is highly entertaining in its own right, since you have a sixth reel added to the game, expanded zones, and unlimited additions to the free spins. We could play this fascinating slot all day – it’s just so much fun.

At first, iSoftBet’s Euphoria instantly reminded us of Starburst, with a swirling nebula as a backdrop and a chilled EDM score. The 5-reel, 3-row slot has 243 ways to win and uses symbols made up largely of coloured gemstones. However, the biggest base game wins come from the star symbols, which act as wilds, and 3 of a kind come with up to 27x multipliers. Euphoria is highly volatile, so you might need to wait for these to trigger, but when they do you can expect a nice win. The bonus feature comes with 8 free spins and an overall win multiplier of up to 243x. That pushes the potential payout to an incredible 25,000x – but beware of the high volatility.

Ancient Greece continues to inspire slot developers, with the biggest Hellenic deity Zeus the inspiration for this Red Tiger slot. It uses their power reels mechanic on a 7×6 grid, set inside a dark amphitheater which looks like something out of Clash of the Titans. Zeus himself is the wild and can appear as a 1×3 super symbol. When he does, he fires off lightning bolts at randomly selected symbols, which expand to cover entire reels with that same symbol. The slot also comes with a free spins feature, triggered (as usual) by landing 3 scatters. You will then receive 8 free spins as a default but have the option of gambling these on a kind of wheel of fortune, with the possibility of winning up to 20 spins instead. In the feature itself, you will take advantage of extra Zeus wilds which add to your chances of hitting a big win. Despite the high volatility, this Greek-themed slot comes with a max payout of just 4500x. However, the 97.73% RTP shows it rewards those who are brave enough to stick with it.

NetEnt continues the trend of appealing to the 90’s nostalgia crowd, with the release of a Street Fighter-themed slot. Old skool graphics, video arcade-style gameplay and slot fun are brilliantly combined, with a choice of 8 fighting characters to choose from. The key to the base game is landing wilds, with each high-value symbol combination awarding you one point. Once you pick up 7 points, the Wild Combo feature comes into play, randomly placing wilds across the wilds. A free spins round contains 4 levels, each with a progressively higher multiplier, and a tougher boss to fight. If you are lucky enough to get to the last level, you take on the infamous M Bison character. Although Street Fighter 2: The World Warrior slot was withdrawn a couple of days after going live due to some bugs in the software, we are sure it will be back soon, allowing us to kick some butt while spinning the reels.

The Expendables Megaways slot was released earlier this year to rather mixed reviews, but the New Mission title is a massive improvement on the original. Although the well-designed symbols based on the movie characters remain the same, several new features have been added to this improved version. These include multiplier wilds, mystery symbols, gamble features, and a super stake function which allows big win hunters the chance to double their stake and chase Golden Skull symbols which all turn into the same randomly chosen symbol. The free spins bonus remains as it was, with multipliers and extra free spins available. Overall, this is another high volatility slot from Stake Logic, but it’s nice to see added features to make the base game more interesting.