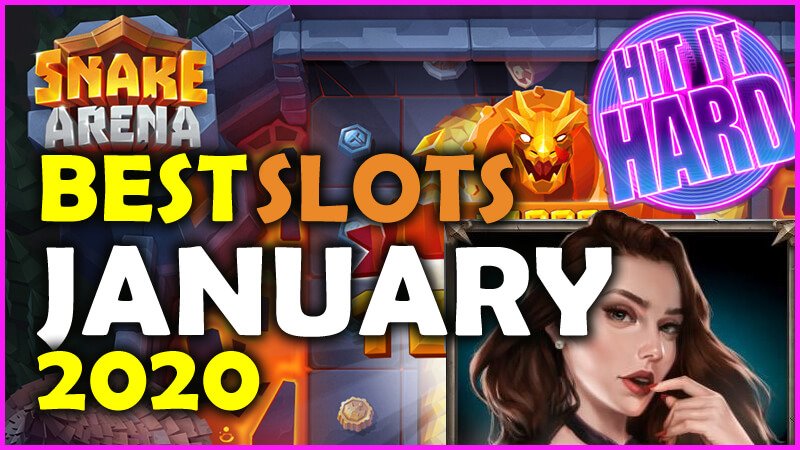 2019 may have been a good year for slots, but how is the new year (indeed, the new decade) shaping up? Let’s look for some clues by reviewing the top 10 slots from January 2020, as rated by our team of experts.

Relax Gaming’s Snake Arena is based on the Snake retro mobile game, which anyone who used an old Nokia dumbphone in the ’90s will fondly remember. This slot looks anything but retro, however, with a 5×5 grid set on a backdrop of an impressive castle, and nicely designed symbols including beer tankards, eyeballs, and crowns. The crowns are the highest paying symbol, winning players 20x their stake for five in a row. In truth, the base game can get a little tedious, since Snake Arena is a very high volatility slot, and you will have to grind your way through a lot of dead spins before triggering the free spins bonus. Those of us who are outside the UK can relieve the boredom and buy these free spins. But even if you do have to wait, it’s still well worth it. Watching the snake chase the knight around the board until it eats its own tail is highly entertaining, with a potential 1000x up for grabs. Although there are higher-paying slots, Snake Arena continues the trend of studios combining storylines into the gameplay.

Play N’ Go’s Wild Frames is a cluster slot with a minimalist feel and a lounge-music soundtrack which you can’t help chilling out to. The 7×7 grid is made up of classic slot machine symbols like bells, stars, diamonds and lucky 7 symbols, so it will appeal to fans of retro slot games. Big wins are formed by building up a series of cascading cluster wins, which add to a tally stored in the ‘charge meter’ on the right-hand side. Once the charge on this meter reaches certain levels, high-paying symbols are added to the grid, leading to potentially big wins. It’s nice that you can see how close you are to these big wins, instead of the random nature of triggering a free spins round. Speaking of free spins, there is no such feature on this slot, and the volatility is very high, so Wild Frames isn’t going to be for everyone, but fans of cluster pays games should definitely take it for a spin.

Eagle Sun is a very simple game, with very simple graphics, but has one serious selling point: a mammoth potential 56,000x payout. The generic Native American theme, complete with a monotonous soundtrack, isn’t exactly inspiring. Neither is the 5-reel, 4-row grid, with its symbols of chieftains, totem poles, drums, and warriors. But big win hunters aren’t going to care two hoots about that, as they chase down that life-changing win. How do you get it? Landing 5 scatters will give you 16 free spins, with 80 paylines on offer. Wilds are collected, and at the end of the feature, a super eagle spin happens, and all collected wilds are added to the screen in random positions for a final payout. It might not look particularly pretty, but the lucky winners who hit the jackpot aren’t going to care about that.

Book of Dead is one of the most popular slots in the world, so the developer (Play N’ Go) naturally wants to milk it for all it’s worth. Legacy of the Dead is their latest Ancient Egyptian-themed slot release, and it’s pretty damned good. Graphics-wise, we return to the familiar chamber deep inside the pyramid, with symbols made up of gods and a mummy of Tutankhamen (the highest value symbol, paying out 500x your stake for 5 of a kind). The free spins in Legacy of Dead are the game’s highlight. As usual, 3-5 scatters trigger the 10 free spins, with 2x, 20x, and 200x multipliers respectively being awarded. A special symbol is also selected which is going to be your special symbol for the feature, and this will expand to cover the whole reel. Together, these combine to produce a potential max payout of 5000x, which is sure to make Legacy of Dead almost as popular as it’s parent Book of Dead slot.

The popularity of the vampire theme seems to be limitless and Play n’ Go are taking full advantage by bringing their 2013 Wild Blood slot back from the dead. Design-wise, this sequel has more of the feel of Microgaming’s Immortal Romance, with 3 youthful female vampires and a single pretty boy bloodsucker as symbols. The base game is pretty bog standard, with each female (Rebecca, Laura, and Margaret) paying out 7.5x your stake for 6 of a kind. However, once the free spins are triggered, things get a little more interesting, as you can choose which of these vampires you want to have spinning the reels. Each of them has their own special attributes, for example, the brunette Rebecca awards you 2x or 3x multipliers for every wild, and these multipliers combine up to a maximum of 81x. Wild Blood 2 is a medium-volatility game with excellent graphics and decent gameplay and has a max payout of 5000x. That’s decent enough for vampire fans, but probably not enough for slot experts.

Old slot classics being given Megaways makeovers were one of the big themes of 2019, and it seems that 2020 is going to continue in the same vein. This time, NetEnt’s original Piggy Riches is jazzed up with a cascading grid and up to 117,649 ways to win, as well as more modern graphics. Thankfully, the pigs themselves look as fat and as rich as ever. In the base game, the bag of loot symbol pays 20x when you spin six of them. The Gentleman Pig symbol (which looks disturbingly like a fat Jacob Rees-Mogg) acts as the Mega wild, covering an entire reel and awarding up to 7x the stake. His wife (Lady Pig) acts as the scatter symbol, with 3 of a kind triggering the free spins round. Before the free spins though, you spin a couple of wheels which determine the number of free spins (up to 22), and your multiplier (up to 10x). All in all, this means a potential 10,000x max payout, which should be enough to tempt slot aficionados.

The latest installment in Elk’s classic series, Hit it Hard was one of our most hotly-anticipated slot releases of 2020. Like the others in the series, Hit it Hard uses classic slot game symbols such as fruit, bars and 7 symbols on a neon-lit background. The soundtrack seems to be a bizarre fusion of a 70’s blue movie and a 90’s Dale Winton game show – not sure what the overall idea is here, but somehow, it works. As always, this slot makes use of Elk’s predefined stake strategies, meaning you can define in advance how much you want to bet, depending on your risk appetite. The main feature of the base game is the wild respin, which also comes with a multiplier of up to 5x. That keeps things nicely interesting, but where Hit it Hard really shines is in the bonus game, which is actually made up of a series of mini-games. It triggers quite frequently too, so boredom is unlikely to be an issue for recreational slot fans. On the other hand, a max payout of 2500x means this slot isn’t going to be for everyone.

Yet another Megaways makeover, Montezuma Megaways from WMS is another fine example of how classic slots can be upgraded with the latest game mechanics. The design of this slot is pleasingly faithful to the original, as we once again spin the reels in the dense jungles of Mexico. This slot combines the typical cascading mechanics of a megaways title with a wheel above the grid.  The base game is quite fun, but as always, the real thrills are reserved for the bonus feature, which is triggered by spinning 3 (or more) Aztec calendar symbols. The key in this bonus feature is the fact that multipliers are unlimited, increasing with each cascade, and as these build-up, so does your excitement at the ever-increasing wins. Altogether, there are 117, 649 ways to win on Montezuma Megaways and the RTP is a shade under 96%. While that is a little under average for a modern slot, the big win crowd will be delighted with a max payout of 12,500x, and of course, fans of the original will love this megaways version. 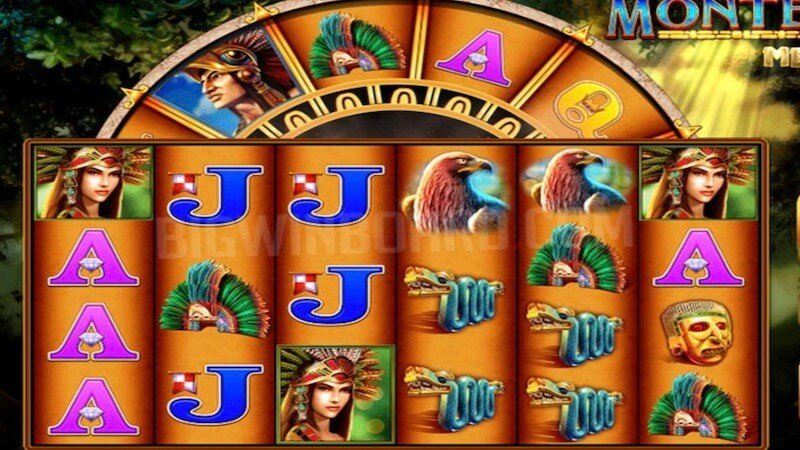 2020 is the Year of the Rat in the Chinese calendar, and iSoftBet has produced a fitting homage to this unfairly maligned creature. As you would expect from a Chinese-themed slot, the design is a riot of colour, with symbols including coins, lions, and rats (the most valuable in the base game). Cash respins keep things interesting, especially as the rat symbols allow for repeated respins. Free spins are triggered in the usual way, with 8 of them in the bonus round, and the in-sync feature means that up to 5 reels can land with identical symbols, leading to decent payouts. That said, the maximum payout is just 1,121 your stake, so while The Golden Rat will appeal to all those looking to celebrate the Lunar New Year, big win hunters should avoid it.

Last but not least, Core Gaming’s Witch Doctor Goes Wild shows that cutting-edge graphics aren’t necessary when you have a fun theme and great gameplay. The 6-reel, 4-row cascading grid is made up of stone blocks, each decorated with the kinds of things we would expect from witch doctors who have gone wild: cooking pots, skulls, and spears. The Witch Doctor himself stands to the left of this reels, shouting some mystical words of encouragement on all your wins, which is certainly an entertaining touch. But the cleverest feature of this game is that the Witch Doctor is standing on top of a column of 8 blocks, on each of which is written a bonus feature. As you start to build up cascading wins, you move up through these bonuses, starting with 1 wild, al the way up to the free spins. When you go on a winning run, the excitement builds and builds, and the Witch Doctor gets wilder and wilder. Once you eventually trigger those free spins, that column of blocks becomes a stack of multipliers, allowing for potentially huge wins. It’s nice to see developers who perhaps don’t have a huge budget, using their imagination to produce entertaining and rather innovative slots like Witch Doctor Goes Wild, so kudos to this small UK slot studio.

The first month of 2020 was a strong one for slot fans. Once again, we see developers introducing thematic elements into the game mechanics, as in Snake Arena, and Witch Doctor Goes Wild. We hope this trend continues, and that we get to play some truly unique games for the rest of the year. Which were your favourites from January?