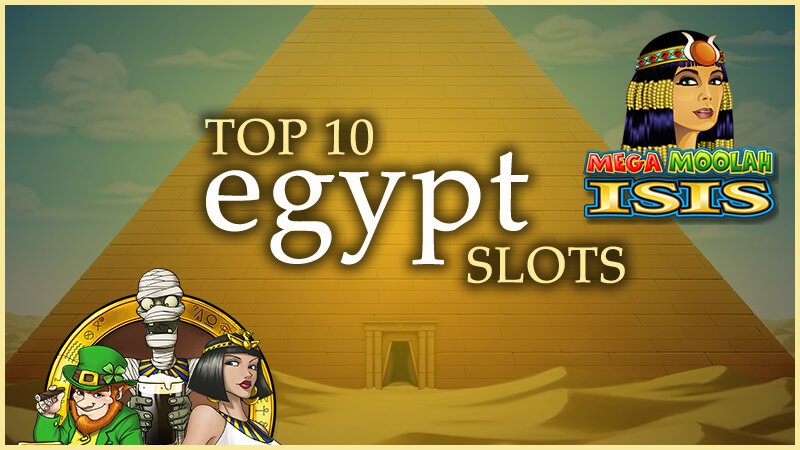 Ancient Egypt has been the inspiration for some of the most-celebrated slot titles of the last few years. Here are our top 10 Egyptian themed online slot games.

IGT’s Cleopatra slot has been enjoyed in the casinos of Vegas for decades, and in 2005 this classic made its debut online. It might be 15 years old by now, but Cleopatra still has enough to melt the heart of any slot fan. The 5×3 grid is made up of symbols like scarabs and eyes of Horus, with Sphinx as the scatter and Cleopatra herself acting as the wild. The bonus feature comes with 15 free spins, and any wins come with a 3x multiplier. It’s amazing to see how much this online slot classic has been the inspiration for so many of today’s Egyptian-themed titles. 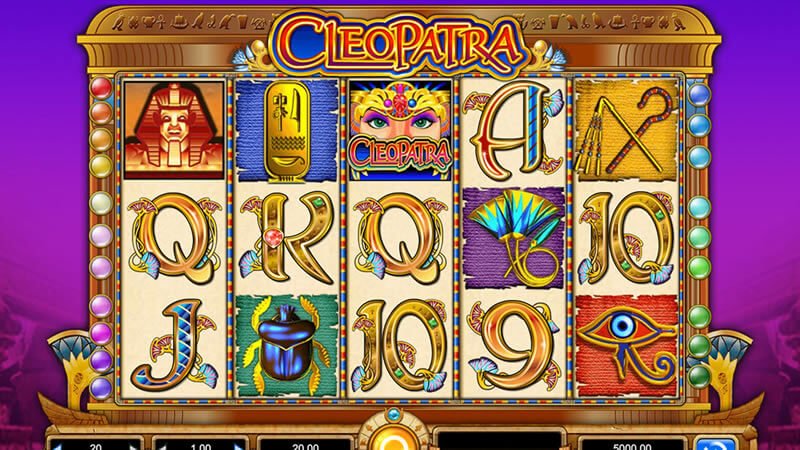 Another Egyptian-themed slot which was a huge success in the land-based casino scene and successfully made the cross-over to the online world. Novomatic released Book of Ra in 2004 and it is still one of the most popular online slots today. In recent years, the slot has seen an upgrade to a deluxe version, but the original is still the best. It features an Indiana Jones-esque character who explores the Egyptian pyramids, unlocking 10 free spins every time he lands 3 Book of Ra scatters symbols. In this bonus round, the book flips open to reveal random pages which then determine the symbol that will expand during the free spins. With an RTP of 96%, Book of Ra manages to combine a great theme, exciting gameplay, and decent payouts. 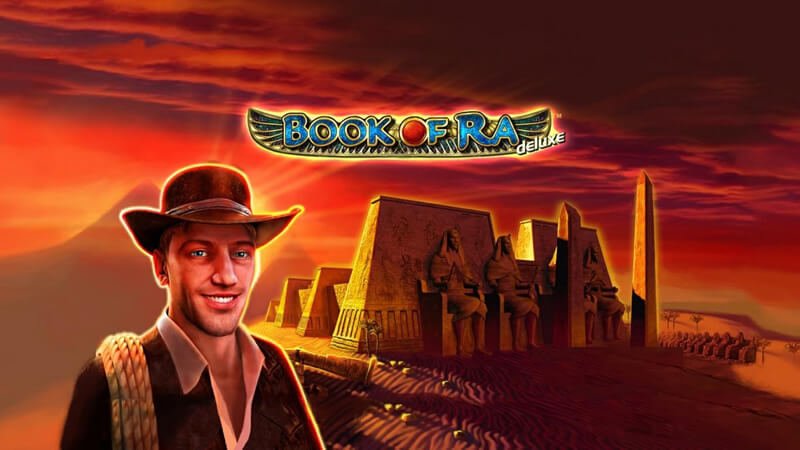 Play n’ Go took a large slice of inspiration from Book of Ra for their own Book of Dead slot. Some might even call it a rip-off, with another Indiana Jones lookalike (called Rich Wilde) featuring heavily, and the titular book acting as the scatter. But in many ways, this slot is even more fun than Book of Ra, with 5 Rich Wilde symbols appearing on the same payline meaning a 5000x win for the player. What’s more, expanding symbols on the bonus round trigger extra free spins. The graphics are also more impressive, with the symbols really popping out. If you liked Book of Ra, it’s time you tried out Book of Dead. 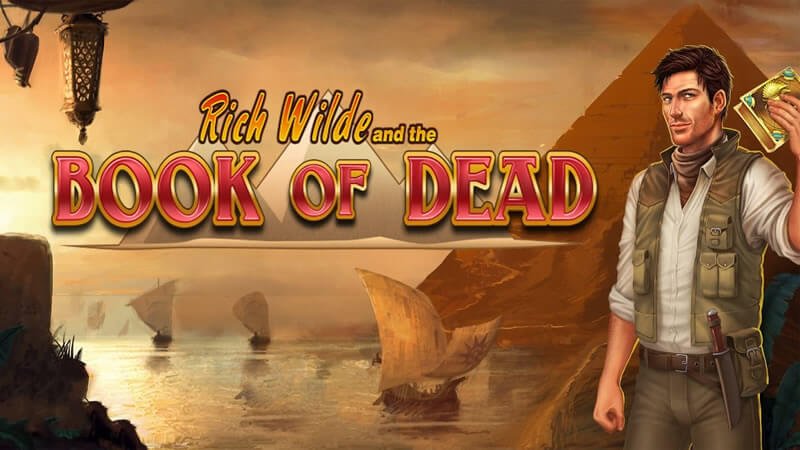 Legacy of Dead is the 2020 sequel to Play n’ Go’s Book of Dead, and it’s definitely a decent effort in the battle for Egyptian slot supremacy. Like its older version, Legacy of Dead comes with a 5000x max payout, and is just as volatile, but still entertaining enough for casual slot players. The slot comes with up to 9 expanding symbols, as well as wilds and scatters, making the base game an exciting ride. A free spins feature is triggered in the usual way (3-5 scatters), but the amount of free spins is always the same – you get 10 of them. The difference comes with the size of the multiplier on offer, with 5 scatters awarding you an incredible 200x any winnings. I think even King Tutankhamun would approve of that.

Yet another Play n’ Go Egyptian slot, Dawn of Egypt looks like a simple 5-reel, 3-row title. But this simple layout is deceptive since it quickly draws players in with high-paying base game symbols such as the scorpion, snake, and falcon. This last symbol (actually the Egyptian falcon god Horus) pays out 100x the stake for five of a kind – not bad for a base game win. The free spins round comes with wild scatters which can potentially trigger an infinite amount of Pyramid Spins. All in all, Dawn of Egypt comes with an RTP of 96.23% and a max payout of 5000x. Of course, as it’s a Play n’ Go slot, this is a volatile title – but still has enough to appeal to any kind of online casino player.

If there is one thing we love here at Stop and Step, it is crazy slot mashups, and Leprechaun Goes Egypt is one of the craziest, bringing together the Irish and Egyptian themes. The leprechaun is the wild symbol and Cleopatra acts as the scatter, three of which will trigger the free spins. In this bonus feature, Irish barmaid scatters multiply your wins. Leprechaun Goes Egypt is a feature-rich slot since another bonus game lets you explore the Great Pyramid, selecting doors to open to uncover cash prizes. This is an incredibly fun game from Play n’ Go and any fans of Book of Dead should give it a spin, especially since it has a very generous RTP of 97%. 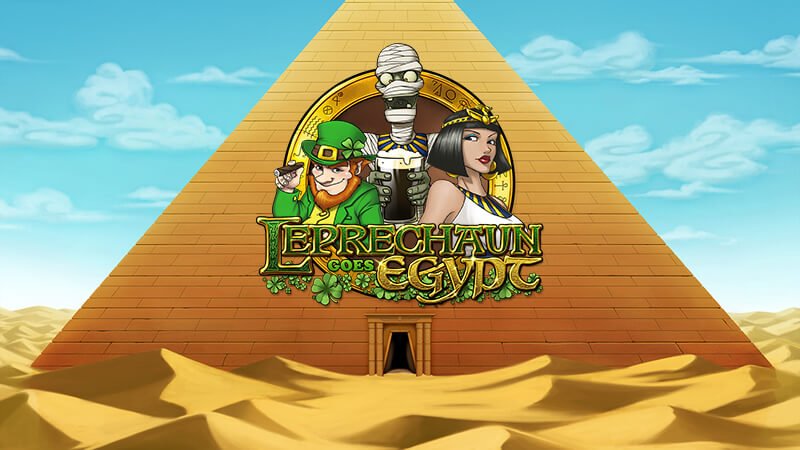 Elk’s Cygnus slot is one of the most beautiful in the Egyptian genre. The night-time backdrop of the Great Pyramid of Giza is stunning to look at. In fact, the name Cygnus refers to the star which lines up with this pyramid. Astrology matters aside, Cygnus is a highly entertaining slot in terms of gameplay. The game starts off with 6 reels and 4 rows, between two pillars. The marble gravity mechanic allows for more rows to be added after each spin. In practice, this means that a sequence of several winning spins has you playing with 262,144 ways to win. Combined with the multiplier values inscribed on the right-hand pillar and a hypnotic soundtrack, Cygnus is a must for all slot veterans and recreational Egypt fans alike.

Mercy of the Gods

Mercy of the Gods is a little like the books of Ra and Dead, since we also follow the adventures of an explorer. This time, we have a female hero to root for, and the NetEnt slot comes with a ton of features as well as a jackpot prize. Respins and double wilds make the base game fun, and the free spins come with expanding wilds which trigger further respins. The mega jackpot of £10,000 is always going to make this slot worth playing, and the overall RTP of 96.64% is certainly impressive. Mercy of the Gods is a great-looking slot too, with typical NetEnt attention to detail given to the symbols and multitude of bonus features.

Red Tiger’s Vault of Anubis slot takes us deep into the pyramids, where the Ancient Egyptians worshipped the dog-headed god of the same name. A statue of this deity stands either side of the reels, and the two dog-men celebrate each time you hit a winner. Thanks to the cascade mechanic, multiple wins per spin are possible. As a cluster pays slot, Vault of Anubis doesn’t rely on traditional paylines to form a winning combination. During the free spins feature, each win increases the unlimited multiplier, leading to potentially huge wins of 5000x your stake. Like many Red Tiger titles, Vault of Anubis is a highly volatile slot, so players will often have to withstand long sequences of losing spins before hitting a winner. But despite this, the compelling theme makes the slot well worth a spin.

The highest paying Egyptian-themed slot of them all is this Microgaming progressive jackpot. Mega Moolah Isis has made dozens of players around the world as rich as a pharaoh, thanks to the minimum £1 million mega jackpot prize. The slot features typically Egyptian symbols such as the eagle and eye of Horus, while Queen Isis acts as the wild, doubling all payouts when she lands in a winning combination. The bonus round comes with up to 30 free spins and up to 6x multipliers. Of course, the real draw is going to be that jackpot, with some lucky punters scoring wins of more than £17 million. 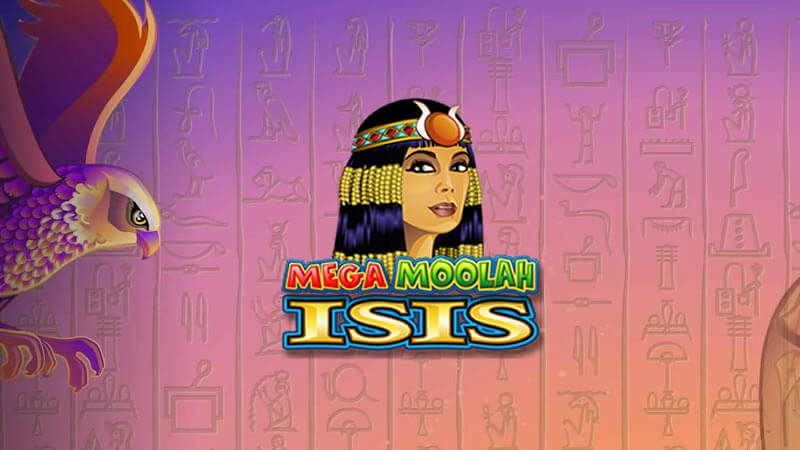 The good news for Egypt slot fans is that developers show no signs of slowing down the supply line of games featuring scarabs, pyramids, and pharaohs. Which of these Egyptian-themed slots do you enjoy playing the most?