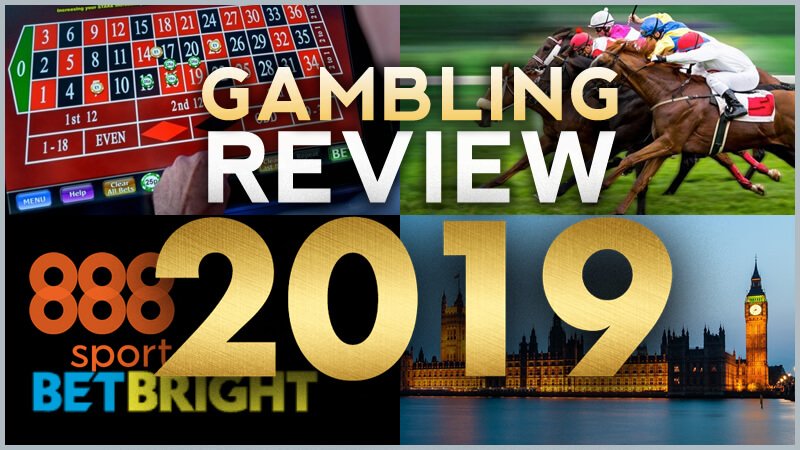 The UK gambling industry had a tumultuous 2019. After years of uninterrupted growth, gross gaming yield (the amount bookies and casinos win, minus what they payout to customers) fell by 0.3% – and that was before the infamous FOBT legal changes. Merger mania, concerns over problem gambling, and an almighty ruckus between the UK government and the country’s gambling regulator capped an eventful year.

Here are the biggest news stories we followed in 2019.

888 group bought Irish-based bookmaker Bet Bright at the beginning of March. Of course, mergers in the gambling industry are a common occurrence, but this case was a little different.

For a start, the purchase price of just £15m was shockingly low. After all, investors had had to pump a cool £60m into the company since 2013. This deal looked like a forced sale and was perhaps the first warning sign of oversaturation in the UK gambling market.

Even worse for customers, it turned out that 888 only wanted Bet Bright’s proprietary sportsbook platform and had no interest in taking over the actual customer base. Bet Bright announced that their entire book would be wound up, with all outstanding ante-post bets declared void and to be refunded.

Understandably, this decision caused an outcry amongst punters. One stood to gain tens of thousands of pounds betting on the winners of the English Championship, as well as Leagues One and Two. Disappointingly, the UK Gambling Commission (UKGC) declared itself satisfied with the situation, and that no action would be taken.

Fortunately, this story had a happy ending. At the end of March, Bet Victor offered to take over Bet Bright’s customer base, along with their outstanding bets. Everyone walked away happy, but the UKGC’s lax attitude to gamblers’ rights would end up biting them in the proverbial later in the year.

The popularity of Fixed Odds Betting Terminals (FOBT’s) had been behind the huge growth in bookie outlets on British high streets since their introduction in 1999. These machines had been dubbed the ‘crack cocaine of gambling’. Maximum stakes of £100 per spin were leading to customers losing thousands of pounds within minutes – and shop staff were often guilty of letting vulnerable punters play way past their limits.

On April Fool’s Day, the stakes were cut to just £2 a spin. On the same day, Betfred and Paddy Power introduced new £500 per spin Virtual Cycling games, which clearly broke the spirit of the law. These too were quickly banned, and bookie outlets quickly began to feel the effects of losing their main income stream.

By the end of November, over 1000 betting shops had shut down, with another 1000 predicted to close in 2020. Stock-market listed gambling firms such as GVC, William Hill and Flutter all announced losses from their retail arms and only stayed in the black thanks to their online presence.

For independent bookies and smaller chains who weren’t online, the FOBT stake limits were an unmitigated disaster, with almost half of these shops closed by the end of the year.

Merger mania has been endemic in the gambling industry in the last few years. Ladbrokes, Coral, and Bwin are now all part of the GVC Group, William Hill moved into Europe with the purchase of Mr. Green, and Paddy Power joined forces with Betfair to create Flutter.

And it was Flutter who set the cat amongst the pigeons in early October by announcing the biggest merger story of them all. A deal with Canadian poker giant TSG – owners of Sky Bet – valued the combined companies at a cool $12bn. This move would mean Sky Bet, Betfair and Paddy Power enjoying 40% market share across all verticals in the UK, and crucially allow Flutter’s Fan Duel and TSG’s Fox Sports to dominate the nascent US sports betting market.

But there must be question marks over whether this merger will be allowed to happen. Forty percent of market share will be a hard sell to the UK authorities, and the new government in Downing Street may take a firmer approach to what are perceived to be the very fattest of corporate fat cats.

Plus, it’s not just the UK that will have a say in this. Competition authorities in the US, Canada, and Ireland will also want to take a close look at what a Flutter/TSG behemoth would mean for their markets.

This story will be an interesting one to watch in 2020.

UKGC slaps fines on operators (various occasions throughout the year)

Despite their disappointing approach to the Bet Bright affair, Britain’s gambling regulator wasn’t completely toothless this year. In May, £4.5m in penalties was issued to offshore operators, showing that the UK market was no longer the soft touch that it was once seen as. In September, Malta-based Multilotto had to surrender their UK licence, and later in the year, the UKGC stated that compliance by Maltese firms was just not good enough.

Just to prove that the UKGC doesn’t just slap fines on foreign firms, the regulator also charged Ladbrokes/Coral £5.9m for repeated breaches of anti-money laundering (AML) and responsible gambling rules. The regulator found that one customer had spent £1.5m in three years, logging into their accounts 10 times a day, and losing £64,000 over the course of a month.

It was incidents such as these which made 2019 the year when the government finally lost patience with the gambling industry.

Parliament slaps the gambling industry – and the UKGC (November 4th)

The UKGC may have taken a tougher approach to rogue operators, but it still wasn’t enough to satisfy the parliamentary committee looking into the gambling industry. At the beginning of November, the AAPG released its much-anticipated report, and it had some very harsh words for the UKGC, slamming the Commission for “failing in their duty to protect casino players”.

However, the toughest talk was reserved for industry operators themselves, particularly after the bosses of Britain’s biggest gambling firms failed to turn up for their hearing. The report recommended that the £2 stake limit on FOBT’s be rolled out to online slots, that VIP accounts and gambling on credit cards be banned, and that the 2005 Gambling Act be overhauled for the internet age.

Most of these measures look sensible, but some of the others – including forcing affiliates to apply for licences, and for UK-licenced firms to cease operating in lucrative but grey markets such as Finland and Turkey – would surely drive many firms offshore.

Summing it all up – and the outlook ahead

2019 was a pivotal year for the gambling industry, and we await 2020 with bated breath. Will we see £2 maximum stakes on online slots to bring them in line with FOBT’s? Will gambling on credit cards and VIP accounts be banned altogether? Will we see a major UK gambling firm give up on the country altogether, seeking more profitable pastures?

Next week we will look at the tea leaves and try to work out what the future holds.

In the meantime, a Merry Christmas from all at Stop and Step.