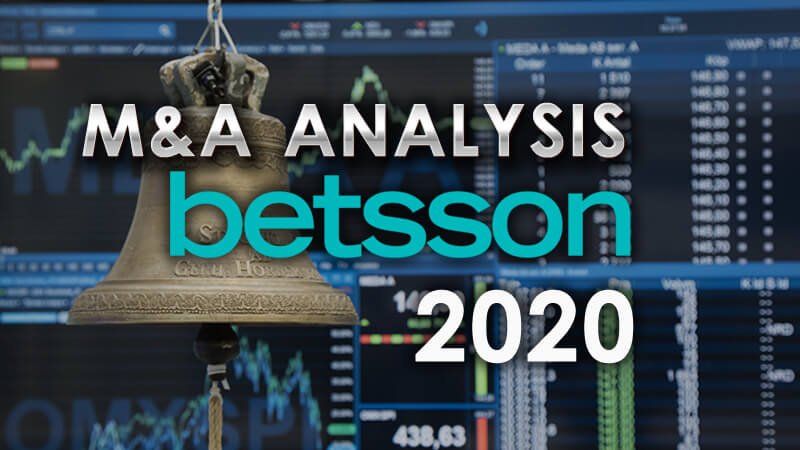 Last week Betsson CEO Pontus Lindwall unveiled disappointing numbers for the Swedish gambling giant. Q3 revenues of £103m were down 10.6% on the same period last year, and the company behind the Betsafe and NordicBet brands needs to do something fast to arrest its decline.

Lindwall openly spoke about buying up other companies, pointing out that Betsson has a bond-funded war-chest of up to SEK 2.5 bn (about £230m) for the sole purpose of carrying out acquisitions.

The only thing is, 230 million quid doesn’t buy you much these days. It certainly rules out any large-scale acquisitions in the states. As we discussed in our recent Flutter/TSG report, the only major player left across the Atlantic is privately-owned Draft Kings, which is currently valued at $2bn.

So, what kinds of deals could Betsson realistically complete by the end of 2020? Today we are going to look at 2 potential candidates for Betsson to buy, as well as one who they could merge with. And since Betsson isn’t the biggest fish in the pond, we will also look at who might buy them.

Just to make it a bit of fun, we will assign odds of each deal happening before the end of next year.

The Swedish gambling market has been badly hit by over-regulation in 2019, and not all of the big operators are going to survive intact next year. Betsson is likely to buy up one or more of their weaker competitors, with Videoslots, Gaming Innovation Group (GIG) and Bethard all looking vulnerable. But Betsson will see the best value at Global Gaming Group (GGG), which was hit hardest by the Swedish regulations.

Their Ninja Casino brand is still strong, and if Betsson can rehabilitate it in the eyes of the Swedish Games Inspectorate, then it makes sense to purchase GGG, whose market cap is just £25m. GGG’s Maltese office is just 15 minutes walk from Betsson’s, so there are some obvious cost-savings to be made.
Odds of Betsson buying GGG before end of 2020: 10/1

Two of the strongest markets for Betsson over the past year have been Central Asia and Latin America. Betsson has been competing toe-to-toe in these markets with the Russian-based, Curacao-licenced Marathon, so it might make sense for Betsson to buy them up in 2020. Dominating sports betting and online casino verticals in growing countries like Peru, Colombia and Kazakhstan would be excellent long-term business for Betsson. A deal would also improve Marathon’s somewhat dodgy reputation in Britain (acquiring a UKGC licence is tough for a Russian operator), so this looks like a win-win for both companies.

How much would it cost to buy Marathon? That’s the big unknown. It’s privately held and based out of Moscow, so there’s no reliable public information about revenues or profits. £230m would surely be enough for a Curacao-licenced operator though, and with the right brand and reputation management, Betsson could turn Marathon into a long-term growth opportunity.
Odds of Betsson buying Marathon before end of 2020: 12/1

Betsson to merge with Evolution

It’s becoming more and more fashionable these days for casino operators to buy software providers. Usually, when this happens, the operator buys a slot developer. But with the live casino sector growing in popularity every quarter, these providers are also becoming potential targets. Indeed, just this week Genting announced they would snap up Leo Vegas’s Authentic Gaming subsidiary.

Purchasing the right live casino provider might make good sense for Betsson, with potential targets including Amaya, Pragmatic Play or Betconstruct. But the biggest prize of all would be Evolution Gaming. Ownership of the Evolution brand would give Betsson access to every lucrative market in the world, including the US. Could Betsson afford to buy Evolution outright? At the time of writing, the market cap of the live casino giant is SEK 41 billion (£3.3bn) – that’s way beyond Betsson’s stated budget of £230m.

But Betsson’s market cap of SEK 58 billion means they could do a merger with Evolution and end up as the senior partner. If Betsson doesn’t want to be left behind in the race for the US market, we think they should open talks with Evolution’s senior management right away. Perhaps they already are.
Odds of Betsson merging with Evolution before end of 2020: 20/1

Lindwall might have spoken about Betsson buying up other companies, but we reckon the company is vulnerable to a take-over itself. And the most likely fish to swallow Betsson up is William Hill.

For starters, William Hill’s new CEO is none other than ex-Betsson CEO Ulrik Bengtsson, who knows the company inside out. Secondly, William Hill is looking at expanding into several European markers where Betsson has a strong presence – including Sweden itself.

The gambling industry is going through a series of mega-mergers, with half a dozen superpowers forming across the world. Betsson won’t be immune to this process – it can choose to buy up its rivals and partners, or it will be bought up itself. It’s going to be interesting to see which route it chooses to go down in the next decade.