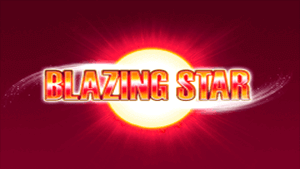 Blazing Star is a new slot in the bookies, although it has been online for a short while longer than on the fixed odds betting terminals. Like all bookies games, the Blazing Star slot has a maximum jackpot limit of £500, although this is per spin, so theoretically it is possible to win multiple jackpots, just very unlikely.
For this gambling session I started with £200 and went straight onto the William Hill Fortune Spins, which looked pretty appealing at first glance. The stake options for the Blazing Star slot Fortune Spins went up in multiples of £10, from £10 up to the maximum limit of £50. Each £10 stake increase improved the winning multiplier but didn’t change any of the base values in the main game. All of the values remained reasonably high except for the Cherries, but these paid for two of a kind, so it was a good chance to spin the bonus wheel even if the wins were pretty dire for those symbols.

The Fortune Spins on the Blazing Star slot awarded multipliers up to x10 for the highest stake of £50. The multipliers were in the form of a bonus wheel split into five sections. Four of the sections were various multiplier values, with a tiny section being a straight win of the £500 jackpot. This seemed unusual but appealing, so I chose the £20 stakes which had multipliers of x2, x3, x4 and x5. All of the sections on the bonus wheel were the same size no mater the stake, so visually it appeared the odds on hitting the £500 jackpot section were the same whether your bet was £10, £20 or £50.

Although I was playing the Blazing Star slot at a William Hill bookies, the online version is actually available at Coral. I guess this is licensing issues from Blueprint Gaming who designed the slot.
I’ve played the online version a little bit, and although it doesn’t have the Fortune Spins options, it does have a higher RTP (return to player), so you do get more wins.

Once the £20 spins on the Blazing Star slot were triggered, the game divided into four sections. If anyone has played the Luck O the Irish slot on Fortune Spins, you’ll get an idea that they are very similar. At this point it was basically playing four separate slot machines, with each of the Blazing Star sections running independently, essentially playing at £2.50 a spin.
The Blazing Star slot ran smoothly and the symbols were very clear and well defined, it was also a very easy to understand and follow game, so it should appeal to players who enjoy lo-tech slots without any features. All I needed was a win on any of the four game windows to spin the bonus wheel.
£60 later I hit my first win, three Grapes for £24. This took me up to the bonus wheel once all four Blazing Star spins had completed. The £500 jackpot section actually looked quiet large. I pressed start to spin the wheel and it stopped almost immediately, no anticipation whatsoever! I was disappointed with the speed of the spin, and with where it stopped; x2 for £48. There was a x5 there, so the maximum win excluding the £500 jackpot section could have been £120. Still, I carried on in an attempt to give it a few more chances. £80 later (this was getting expensive), a win of £8 gave me a multiplier of x4; not that great considering the cost of getting the wins. I gave the Blazing Star slot a few more chances before retiring the game and moving over to the more enjoyable Fishing Frenzy, followed by one spin on 20p Roulette.

Not a great result from that gambling session, although it still looks like the Blazing Star slot has some good potential. I should try on £2 spins next time, just to see if any decent reel wins drop in.