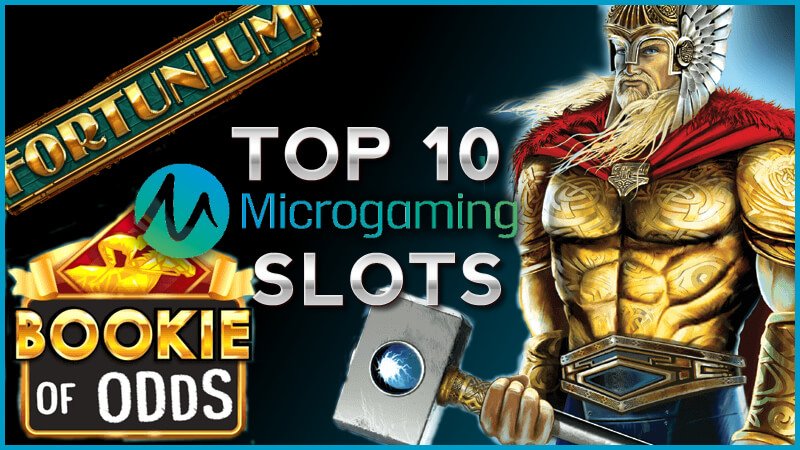 Alongside its big rival NetEnt, Microgaming is one of the two ‘big dogs’ of the slot world. This Isle of Man-based software developer is responsible for some of the most popular slot titles of the past twenty years. From mega jackpots to film/franchise titles to slots with innovative re-spin features, Microgaming has created some real crackers. But out of the hundreds of online slots developed by Microgaming, which of them deserve to make it into a top 10? Here are my humble suggestions:

Thunderstuck II is Microgaming’s best foray into the world of Nordic mythology, and since its release in 2010, has become one of the most popular slots of all time. As is always the case with Microgaming titles, the graphics are awesome, and the base game itself is highly engrossing. But what really sets Thunderstruck II apart is the Great Hall of Spins bonus feature, where the deities of Norse religion such as Valkyrie, Odin, Loki, and Thor himself welcome you with increasing numbers of free spins.

Steampunk is always a fascinating slot niche, and Microgaming’s version is the 40 payline, 5×5 Fortunium. This is perhaps one of the best-looking Microgaming games out there, and with plenty of mystery transforming symbols, win boosters, and free spins that can turn wild, the gameplay on this medium variance slot is hugely entertaining.

If you are anything like me, you enjoy horse racing and spinning slots in equal measure. Microgaming and NetEnt both released gee-gee themed slots earlier this year and in my view, Bookie of Odds beats Scudamore’s Super Stakes by a head. This one has free spins galore, a decent RTP of 96.31%, and the re-spin feature allows you to spin any reel again for another chance to win.

As a huge fan of The Wizard of Oz book I am always on the lookout for games themed around the Frank L Baum stories, so was delighted to see Microgaming release Book of Oz. This charming slot makes good use of Microgaming’s respin feature and if you spin 5 wizards on a single line you win 5000x your stake. The only way Book of Oz could be improved is with some tunes from the film in the soundtrack…and perhaps some flying monkeys.

The red-horned demon Hellboy is one the best-loved comic book heroes of all time, and the official Microgaming slot has received similar levels of acclaim. The Underworld bonus feature is particularly entertaining. Trigger it and you will follow Hellboy down to the Chamber of Fire to claim the Relic of Power. With a top prize of £25,000 up for grabs, it’s well worth the trip.

Mega Moolah has become synonymous with massive progressive jackpots. So many casino goers have won life-changing amounts while spinning these reels, with $63 million paid out to players in the first 9 months of 2019 alone. This African savannah-themed progressive has no less than 4 jackpots going at any one time, meaning there is always a chance to win.

The team at Microgaming seem to be obsessed with Ancient Egypt. There are so many Egyptian-themed slots by this developer – Rameses Riches, Pharaoh’s Fortune, Mega Moolah Isis….in fact, the list is as long as the Nile itself. But I sphinx the best of them is Wild Scarabs, a 5-reel, 243-ways slot with a cool soundtrack and some decent gameplay.

Tattoos seem to be all the rage these days. I have a distinct aversion to pain, but I do very much enjoy this Microgaming slot, which again features the re-spin button to give you another bite at the cherry. This is a mandatory 1024 payline title, meaning you only have to choose the number of coins you want to wager, and the spin button does the rest. Symbols include Ying Yang fishes, Winged Heart, Flaming Dice and other body art classics.

For years, slot fans sorely missed a Mexican wrestling-themed game. Microgaming solved this pressing issue in 2018, with the release of Lucha Legends, a bright and fun spandex-clad slot with an RTP of 96.37%, medium to high variance and some awesome multipliers.

Season 8 may have gone down like Rhaegal over Dragonstone, but for the first five seasons, GoT was the best thing on the box. Microgaming captured the spirit of those early days with this 5-reel, 243 payline slot game. The symbols are based on the great houses of Westeros, featuring Targaryen, Stark, Baratheon, and Lannister. The bonus rounds are particularly exciting, and should you spin 5 Iron Thrones symbols in a row you will enjoy an amazing x6000 multiplier.

Compiling this list reminded me just how many splendid slot games have been developed by Microgaming over the years. Have you got any favourites which I omitted? I look forward to reading about it in the forum!