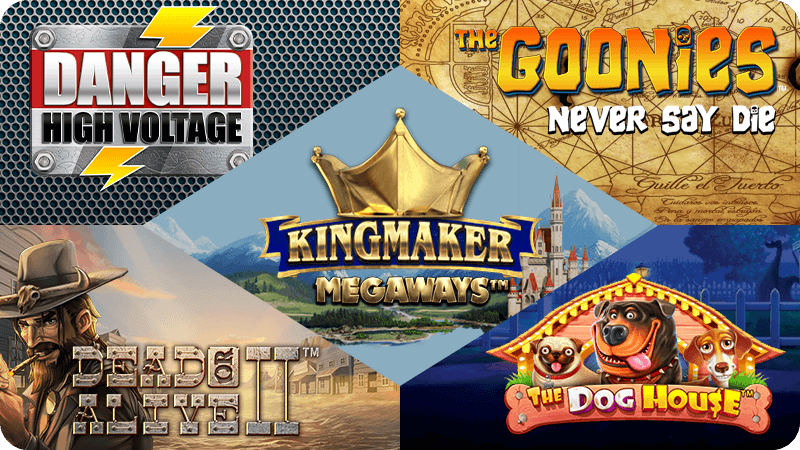 The Top 5 Slots as Recommended by Streamers

Do you have a favourite go-to slot? As an ‘80s heavy metal buff, I love NetEnt’s Motorhead slot game. At weekends I like nothing more than sticking the volume up to 11 and triggering those Ace of Spades bonus features.

Unfortunately – due to repeated noise complaints and occasional threats of an ASBO – this Sunday evening, Motorhead was off the menu. I was forced to venture outside my slot comfort zone and discover something different. My search for the latest in online slots led me to the big streaming channels on YouTube and Twitch. And you know what? Some of the slots I found were pretty darned good.

Here are 5 slots which the big gaming streamers (as well as my good self) are loving right now.

We covered this BTG slot a couple of weeks back, praising it for the unique gameplay and gorgeous graphics. Playing it live confirms that Kingmaker Megaways is a beautifully designed slot. And if you have the patience (and bankroll) to build a big enough multiplier, then you could reap huge rewards when you finally trigger the free bonus spins feature. It’s very volatile, so this isn’t the slot for those seeking small, frequent wins, but Kingmaker Megaways is going to be my game of choice next time I get a new sign-up bonus.

I stumbled upon this Pragmatic slot over at the Casino Daddy channel, who helpfully woofed his way through the canine-themed game. Pragmatic Play isn’t exactly famous for its cutting-edge graphics, but the simple cartoon-style look actually seems pretty appropriate here. The Dog House is an absolutely charming slot, and although the base game is a simple 5-reel, 20-payline setup, the multipliers combine to increase your payline wins by up to 9x. This slot has some serious bite, but if I do have a bone to pick with The Dog House, then it’s the crazy high variance.

Presumably, I have been living under a rock for the past 6 months, as I totally missed the April release of NetEnt’s Dead or Alive 2. But this one seems to have become a staple on the big slot channels, with seemingly all of them spinning it at some stage on Sunday night. I enjoyed the 2009 original but was absolutely blown away by the beautiful makeover – major kudos is due to the design team here. Despite the snazzier graphics, it’s great that NetEnt has kept the same pay symbol set and much of the gameplay, especially the free spins modes with their wild multipliers and sticky wilds. The soundtrack is awesome too, particularly on the train heist bonus. Yeehaw, I enjoyed this one.

The Goonies was one of my favourite movies back in the 80s, but for some reason, I have never gotten around to playing the official slot game. I noticed several YouTubers playing Goonies during their live streams, so finally decided to try it for myself. The gameplay is certainly interesting, with no less than 6 bonus features, which are triggered when you spin three or more scatter symbols. The top bonus is the One-Eyed Willy’s Treasure feature, allowing you to win 10,000 x the stake, which is obviously nice if you happen to trigger it. But the downside to having so many winning spins in the bonus features is that the regular spins are unlikely to throw up many wins. You are going to have to grind out those dead spins, but fans of The Goonies film will find the graphics and soundtrack enough to keep them entertained.

Another BTG title, Danger! High Voltage is inspired by the 2002 song of the same name by US rockers Electric Six. I remember it was an oddly catchy song so when I heard it being played on Twitch, I had to give the official game a go. This slot isn’t the prettiest that BTG has ever made, but the 6-reel engine offers 4096 ways to win and throws up some interesting gameplay into the bargain.  I love multipliers on free spins, so the 66x boosted payout was pretty awesome. Some of the lyrics-based symbols (Fire in the Taco Bell in particular) made me laugh out loud, and if you know the song, then I highly recommend this slot. I seem to remember that Electric Six were a two-hit wonder, so the only question now is whether or not BTG is going to release a Gay Bar slot.

So those were 5 games I discovered on the big slots channels this weekend. Have you discovered any gems thanks to YouTube or Twitch streamers? Please let me know in the forum so I can check them out.