Buster Hammer Carnival slot brings the circus right to your computer screen (or phone or tablet for that matter) with a fun looking new slot from NextGen Gaming. They’ve taken one of the most popular attractions of a carnival, the strongman, and used him to create a slot that seems like a lot of fun. But let’s take a closer look and see if it’s actually any good.

Right away you’ll find a 6×5 set of reels but these come with a pretty big 3125 ways to win. Not only that but you’ll see later that we can extend this to get even more. Once you’ve decided how many reels to activate for the Wild symbols (see more on this below), just spin the reels and off you go. Landing a winning combination using the base symbols from left to right will give you a cash reward, or you may get a Bonus. These base symbols are as follows, ranked in ascending order based on their value:

All these symbols can offer you a cash reward when in the right combination. But in order to help you get some wins, there are 2 Wild symbols available to you. The first is the Wild Hammer symbol which will substitute for all other symbols in a winning combination apart from the Scatter symbol. If one or more of these appears in a win, it will trigger the Wild Striker Feature which I’ll discuss shortly. There’s also the Gold Wild Hammer symbol which also substitutes for all other symbols in a winning combination and only appears during the Wild Striker Feature. Lastly, you have the Scatter symbol shown as the slot logo, used to trigger the Free Spins Bonus. 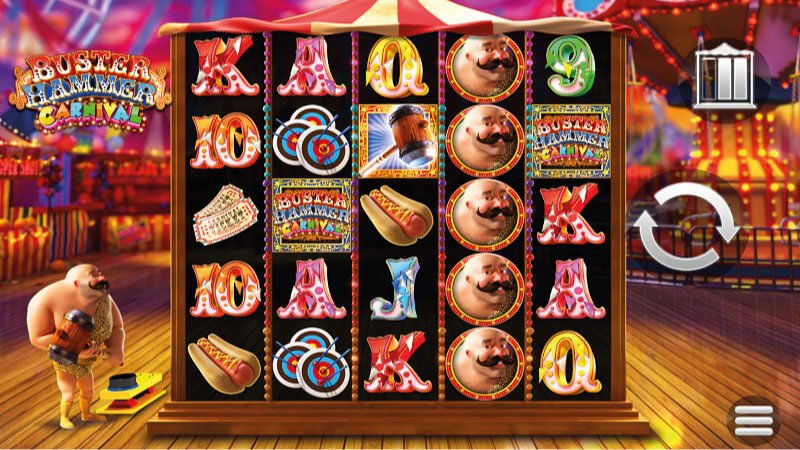 Wild Striker Feature. When triggered, Buster will hit the Wild Striker once for every reel on which the Wild symbol appeared. From the bottom position of the corresponding reel, up to 5 symbols can turn into the Gold Wild Hammer symbol. As such, you could be very fortunate and get a lot of Wild symbols for some pretty big wins. All wins are awarded once all reels have finished. Note that it’s also possible to trigger this feature during the Free Spins Bonus. If that’s the case, then each hit from Buster can turn up to 8 symbols into the Golden Wild Hammer symbol.

Free Spins Bonus. Like with most of the bonuses, this one is triggered by 3 or more Scatter symbols appearing anywhere on the reels. You’ll be given 10 free spins and they cannot be retriggered. Doesn’t sound very interesting huh? Well hang on. The reels in the bonus actually expand to reach 8 positions high. This gives you a pretty staggering 32,768 ways to win.

Buster Bet. You’ll notice at the top right of the screen there’s an adjustment you can make to the reels. This provides you with 3 different levels which correspond to the number of reels on which Wild Hammer symbols can appear. You can have them appear on either reel 3, reels 3 and 4 or reels 2, 3 and 4. 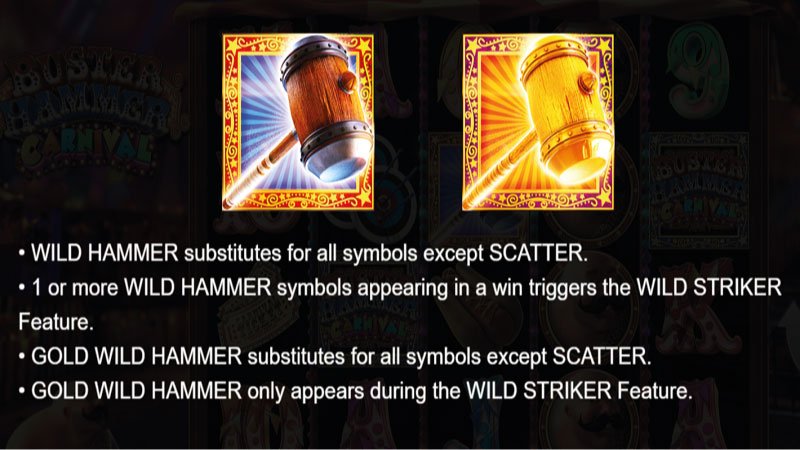 Buster Hammer Carnival slot from NextGen is a very fun game, at least in its appearance. I really like the concept; we’ve seen carnival slots before like Zombie Circus slot but this one takes it a step further by using the main character, a strongman, to actually participate in some of the features. This works really well in my opinion and I really applaud NextGen for doing so. When it comes to the features themselves they’re… interesting. I like the idea of using the Wild symbols to trigger a Bonus of their own and win potentially quite a lot of them. I also like the way the set of reels turns into an 8×5 set of reels during the Free Spins Bonus. However, I don’t like the fact that you have to increase your bet significantly to give more reels the ability to show the Wild symbol. This takes away a lot from the entertainment factor and actually makes the game pretty stingy in my opinion. It had a lot of potential but for me, Buster Hammer Carnival slot just isn’t worth it. Be sure to let us know what you think down in the comment section below.

Nice Features But There's A Price