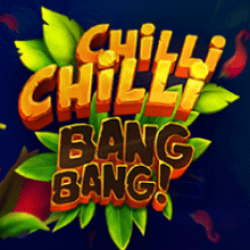 Chilli Chilli Bang Bang slot is a new addition from iSoftBet that despite having a very similar name to the popular 1968 movie Chitty Chitty Bang Bang, actually has a completely different story and theme. What you have here is an ancient civilization deep within the jungle with cat-like rulers. It’s similar in appearance to some other Aztec type themes that we’ve seen before such as Amazing Aztecs slot. The name is pretty catchy though, the theme is decent and the gameplay isn’t bad either, but I’ll come onto that later.

If we look into the appearance of this slot though, it’s pretty simple but with some nice graphics and detail. The symbols are etched onto stone reels of which there are 5, and I have to say they look pretty cool and different from most other designs. The lower value symbols are void of colours, while the higher value symbols even appear as though they are more valuable. When it comes to actually playing the game, you have a very typical 5×3 layout here with a standard 20 pay lines. You can play from just 20p a spin up to £20, quite a lot smaller than other slots but more than enough for most. For those who are lucky you can win up to 2,000x your bet which certainly isn’t bad! To play the game you must spin the reels and try to get a winning combination from left to right using the base symbols which will either offer you a cash reward or a bonus as I’ll explain later. These are listed as follows, ranked in ascending order based on their value:

The Bell, Cherries and Lemon symbols are all in colour. Additionally, there’s a Wild symbol in the form of an Aztec-like ace which will substitute for all other symbols in a winning combination apart from the Scatter symbol. The Scatter symbol on its own is also worth a small value for 2 or 3 in a winning combination, as well as triggered the Bonus Wheel when 3 or more symbol are scattered across the reels. They appear only on reels 1, 3 and 5.

Scatter Spin. If the Scatter symbols appear on reels 1 and 3 only they will trigger reel 5 to spin, awarding either 3x, 5x or 8x multipliers or the third Scatter symbol to trigger the Bonus Wheel.

Bonus Wheel. This is the main bonus in the game and can offer 1 of 3 different games which are all based around free spins:

So how does Chilli Chilli Bang Bang slot from iSoftBet fair? Overall I would say pretty well, although I would have liked to have seen more bonuses here. The ones they do have are pretty good and I like how there are 3 different variations of free spins, but that’s pretty much all there is to it. For some, that may not be a problem but personally I found the slot to be quite boring after a while and not especially rewarding either. It’s a pretty low variance slot with an RTP of 96.12% which isn’t bad but as I say, I would have liked to have seen more here especially as the design and graphics are really interesting. It’s worth a try but probably in smaller doses.