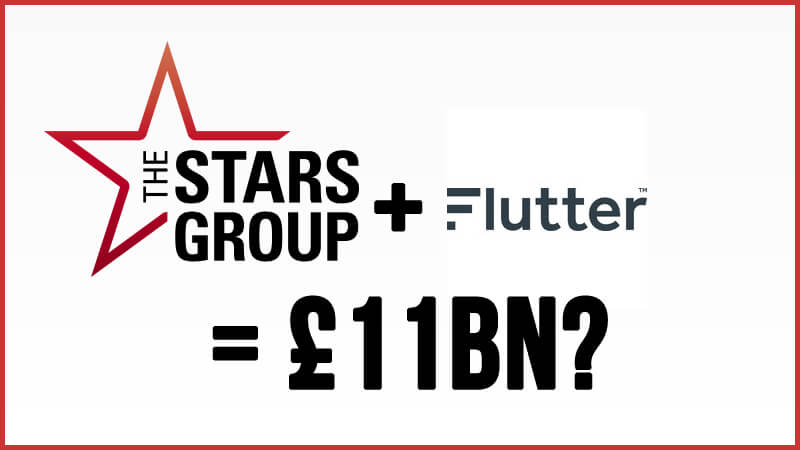 Last week it was announced that Flutter Entertainment (formerly PaddyPower/Betfair) and Canada’s TSG (owner of the SkyBet and Poker Stars brands) were going to merge. This deal has shaken up the gambling industry and has led to much speculation about what other mergers could be on the horizon.

In this special report, we will examine the chances of this merger coming off and compare a combined Flutter/TSG group to its rivals in terms of customer base, revenue, and market share. We will also take a look at the reasons behind the move, how it could improve the user experience, and try to figure out the next big deal in the gambling industry.

The deal in numbers

While the move might not have surprised everyone in the industry, the stock market clearly hadn’t priced the news in. Flutter saw its share price rise by 14%, while TSG’s stock gapped up a whopping 30% overnight. This spike in valuations means the combined firm (who we will call Flutter/TSG from here on) would be the biggest not just in the UK, but globally, with a combined market cap of £11bn.

Using the 2018 numbers as a guide, Flutter/TSG would have annual revenues of £3.77bn, and a global active customer base of 13m. In the UK, the group would command a staggering 40% share of the gambling market.

The most intriguing detail is how the two groups’ US divisions will be merged, with TSG’s FOX Sports having the right to acquire an 18.5% stake in Flutter’s Fanduel US business from 2021. And it is perhaps this piece of news which reveals the real reason behind the proposed merger.

What is the thinking behind this move?

Although British punters are getting excited by the prospect of SkyBet joining forces with PaddyPower and Betfair, the truth is this deal has little to do with the UK market.

The merger is rather more of an attempt to build early dominance in the US sports betting market. Since the 1992 PASPA act was struck down by Federal Court last year, individual states have been given a free pass to legalize sports betting. Twelve states have already done so, and another 30 are currently debating legalization. With the illegal sports betting market in the US estimated to be worth $150 billion a year, there is a ton of potential money on the table for Flutter/TSG, who have been busy making separate inroads into America.

TSG teamed up with Fox Sports earlier this year, and if this unit can be successfully combined with Flutter’s FanDuel fantasy sports operation, it would create the largest sports betting operator in the States.

Apart from the US angle, analysts have mentioned a combined £140m a year in potential cost savings. But such savings can often prove illusory. SkyBet and PaddyPower both run on state-of-the-art platforms, but can they be made to talk to each other?

Will there be any advantages for me as a punter?

There might be, given that the combined group of brands now offers every gambling product under the sun. But it all depends on how successfully the various products can be integrated across platforms. To be fair, the omens here are quite good, since PaddyPower/Betfair merged with FanDuel in 2018 and already, UK customers are enjoying fantasy sports on the PaddyPower website.

If TSG’s poker rooms can be accessed directly by PaddyPower visitors, or the Betfair exchange is made available to SkyBet customers, then that could be a lot of fun from a user point of view.

Another theoretical benefit could be found on the sports betting side. Greater liquidity should lead to reduced ‘juice’ added to each overall book, leaving more potential profit for punters. It would be good if PaddyPower could reduce their juice, as their football odds are widely regarded as some of the most uncompetitive in the industry. But we will have to wait and see on that front.

How likely is this merger to actually happen?

The deal will have to be rubber-stamped by various regulatory bodies, including the Dublin, London and Toronto stock exchanges. None of those should present a problem, but the trickiest test might come from the UK’s Competition Commission. This body typically opens an inquiry if the proposed merger would hold a market share of 25% or more. Since a Flutter/TSG merged operation would hold a combined share of 40% of the UK market, an inquiry is almost a certainty.

The boards of the two companies seem confident that the merger will be allowed to go ahead without any problems. But 40% market share in the UK is going to raise a lot of eyebrows, especially as the gambling industry is increasingly viewed as a useful whipping boy in political circles right now.

What’s more, apart from the PaddyPower betting shops, there doesn’t seem to be too many obvious assets the group could get rid of to reduce that market share in the UK – and none of their rivals are looking to expand their high street presence anyway.

The odds of this merger actually going through are probably a little longer than Flutter CEO Peter Jackson would like to admit.

What’s the risk of this merger ending up as a disaster?

The big risk to the Flutter/TSG deal is that the current sports betting legalization trend in the US could stall or even go into reverse, especially in the well-populated states. California won’t even discuss their bill until late 2020, and in Texas, legislation is being proposed by a Democrat – which almost guarantees it will fail.

It’s one thing for sports betting to be legal in Rhode Island (population: 1.057 million), but to crack that $150 billion black market in the long term, Flutter/TSG needs market access to states like Texas, California, and Florida (combined population: 90 million).

Furthermore, in several of the states where betting has been legalized – particularly New York – mobile and online betting is still off the menu. To take full advantage of the potential of the US market, Flutter/TSG needs to be able to accept bets over the internet.

If it looks like that won’t happen, expect to see the sky-high valuation of the proposed group plummet.

What’s the next big merger on the horizon?

The Flutter/TSG news didn’t just raise the stock price of the two firms, but also had a positive effect on other listed gambling firms. William Hill’s shares rose 3.65% while GVC (owner of Ladbrokes and Coral) saw its value jump nearly 1%. It seems that the market is pricing in further mergers in the gambling industry over the next few months.

The current merger mania in the gambling industry is being driven by a thirst for geographical diversification, particularly into the United States. The major UK operators are busy buying exposure to the American market, with William Hill, Bet365 and GVC all making small, strategic entries into the US in recent years.

But the Flutter/TSG merger could well force these firms into speeding up their own expansion efforts. And the obvious way to do that is to purchase the only important chess piece still remaining on the board.

That piece is the privately-owned Draft Kings, who are FanDuel’s main rival in the Daily Fantasy Sports (DFS) market. Last week, the company rather publicly sought a $2bn valuation, in a move which looked very much like an open invitation to the big UK players.

Since Flutter already owns FanDuel, there is no way the US competition authorities would allow them to purchase Draft Kings. Indeed, a proposed merger between the two DFS giants was already rejected in 2016. But that still leaves the likes of William Hill, Bet365 and GVC scrambling to strengthen their American empire, and only one quick and easy way to do so.

In the new year, Draft Kings could well become the subject of a bid from one of these UK giants, as well as Israeli powerhouse 888. There is even the potential for several of these groups to enter a bidding war which could drive the Draft Kings asking price to insane levels.

Closer to home, we are likely to see some consolidation between the numerous Swedish-owned operators. Increased regulation in Sweden has been disastrous for these firms in 2019, with the stock prices of Global Gaming Group, Betsson and Kindred going deep into bear market territory. It’s likely that we will see one or more of these operators get swallowed up by a leaner competitor in the new year.

In the UK, it’s hard to see many more mega-deals on the horizon, since the main players have already expanded enough to start attracting the attention of the competition authorities.

That said, William Hill and 888 have been rumoured to be considering a merger for much of the last decade. Could the two companies finally decide to tie the knot in 2020? Both like taking over other brands, with William Hill buying Mr Green and 888 snapping up Betbright in the last 12 months alone. So a merger here is a distinct possibility – especially if Flutter/TSG does get the go-ahead.

With share prices rising across the board on this merger talk, the safest bet at the bookies right now might be to just buy a bit of them.

What do you think will be the next big merger on the domestic front?

BetFred and BetVictor to become BetFredVictor?

As always, I look forward to your crazy suggestions in the forum.