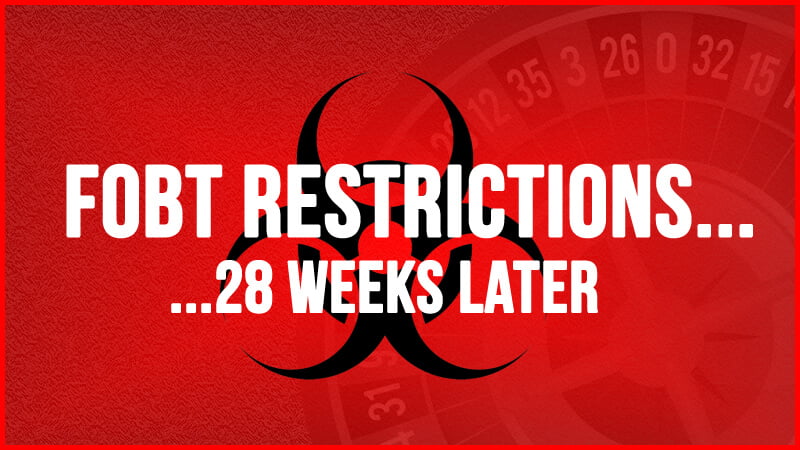 This Monday marked 28 weeks since the UK government changed the laws on Fixed Odds Betting Terminals (FOBT’s), slashing the maximum stake on the machines from £100 to just £2. Before the change, the industry warned of thousands of shops closing with the loss of tens of thousands of jobs. With a little over 6 months gone since the law change, we figured it was time to look at what effect it has had on the UK bookmaking industry.

How important were FOBT’s for bookmakers?

Why did so many betting shops spring up on the High Street in the years before the ban?

When FOBT’s were introduced in 2001, there was a limit of 4 machines per outlet, a restriction which still stands today. This is largely the reason why there are so many betting shops within a short distance of each other in town centres. In some towns, 7% of all non-vacant shops are bookies. Clearly, there has been a huge demand for FOBT’s, and bookies tried to allow as many customers as possible to play.

In total, there were an estimated 8300 bricks and mortar betting shops in the UK at the end of March 2019.

The big players were: –

The rest were made up of smaller, local chains and independent bookmakers. 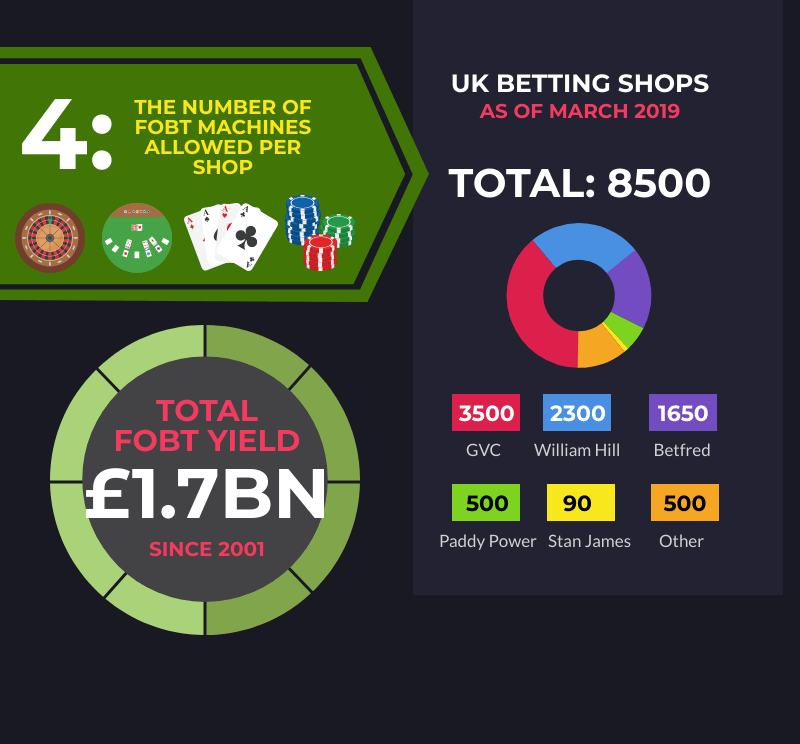 How have these changes affected revenue and the viability of high-street shops?

The data hasn’t come in from all listed bookmakers yet, but those who have reported have shown a big drop in revenue from the machines and from the outlets overall. GVC (the owner of Ladbrokes and Coral) has seen revenue from the machines drop by 36%. The company has closed a total of 198 shops so far this year, with plans to close a further 900 betting outlets over the next two years.

It’s a similar story at William Hill, who saw a 25% reduction in income from the machines and has plans to close 700 of their shops.

The reduced revenue is even affecting prize money in horse racing. Chelmsford racetrack recently had to beg for more support from owners and trainers to contribute towards prize funds. The FOBT changes have led to an estimated £40-60 million pounds a year drop in revenue from media rights.

Is the money just being spent online instead?

At GVC, online sports betting has increased 5% since the restrictions were put in place – a figure which is even more impressive given that this summer had no international football tournament. We would expect even greater growth on the online casino side, as punters switch to playing slot games where they can bet for much higher stakes than the £100 FOBT limit.

For example, Narcos slot by NetEnt allows punters to wager stakes of £400 a spin, and the UKGC doesn’t seem to have a problem with that. Wouldn’t Ladbrokes customers who want to bet more than £2 a spin on an FOBT not just play these kinds of games instead?

Anecdotal evidence suggests this is exactly what is happening. We hear tales of customers getting frustrated by the low stakes limit and pulling out their phones to bet on the operator’s website instead. It has also been reported that Coral staff members have been offered bonuses for signing up players to the website.

Of course, this avenue is only available to the big bookies who have an online presence. Smaller, independent bookmakers are closing in similar numbers to the big players, with Dave Pluck – a bookmaker chain in Liverpool – announcing plans to close 10 of their 40 shops. And these smaller operations can’t direct customers to a bookmaker/casino website.

Is there any chance of the £2 restrictions being relaxed?

Right now, it’s looking unlikely. The political will just isn’t there, and with a possible election around the corner, no party sees the benefit of sticking a ‘raise betting limits’ policy on their manifesto. There doesn’t even seem to be the possibility of bookies getting away with more creative solutions around the problem. On the first day of the restrictions, both BetFred and Paddy Power came out with virtual sport games which allowed customers to wager up to £500 a bet. These were quickly removed after complaints by the UK Gambling Commission, and haven’t been seen since.

What does the future hold for FOBT’s and high-street bookies?

The explosion in high-street betting outlets in the years between 2001 and 2019 can be largely explained by the ‘4 FOBT’s per shop’ rule and the huge demand for high-stakes gambling. With greatly reduced demand for machines that only allow £2 maximum stakes, the big players are likely to continue shutting outlets and try to switch customers over to their online channels. These channels are cheaper to run, easier to scale and allow for higher stakes gambling than FOBT’s ever did.

For smaller bookmakers, this won’t be an option, and the next few years will be tough. But there will always be a demand for local betting shops – after all, they are a social space where friends can meet. For those smaller independents who do survive, there will be a less crowded marketplace, without a Ladbrokes, Coral, William Hill and BetFred on each corner. They might have to get by with smaller margins but make up for it with a greater volume of customers.

And if the UK government can be persuaded that £2 maximum stakes are too low, and that too many jobs have been lost, and that online operators can offer much higher stakes gambling than FOBT’s ever did, then maybe – just maybe – the FOBT limit can even be increased.

Most probably, though, we will have to wait for the political atmosphere to die down first. We will look at the FOBT situation again on April Fool’s Day 2020 and see what the tea leaves say then.