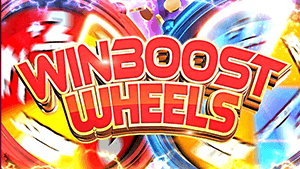 Win Boost Wheels is a new slot in Ladbrokes and Coral on their fixed odds betting terminals, although it’s also new online so it was probably a dual release as Ladbrokes online casino currently have it on their main page. I haven’t got round to playing the online slots version just yet, but the bookies slot seemed not too bad, so I decided to give it a go.

My initial deposit was £100 with the stake set to my usual £2, and gambles £5+ switched on. I like to see what gambles are on offer, but generally they are all the same.

Win Boost Wheels has five reels and only five winlines, making it very lo-tech. There two bonus Boosts on the fifth reel, one better than the other. It’s not possible to land both during a single spin, but it looks as the the odds of landing either one are the same. The bonus is only activated if a win is on the reels, so you may see the Win Boost Wheels slot bonus land and nothing happen, this is because there isn’t a win on the reels to multiply. I guess it would be nice for a bonus re-spin to occur, but then the odds would need to be changed.

After £60 played through the bookies slot, the Super Win Boost Wheels bonus landed with a couple of 50p wins. The super bonus wheel had a x2, x4, x2, Hold Win and Respin and a Win Boost on offer. The wheel rotates collecting the awards and replacing each award with a ‘collect’, the bonus then either ends when everything has been collected, or it lands on a ‘collect’ position. This time around the slot collected all of the awards which paid a total of £45. Had the initial win being higher you can see the potential in the bonus.
Although the Win Boost Wheels slot was very lo-tech, I did enjoy it. The gamble was a 50/50 pick selection, although you could change the odds to increase your potential win, there were also mystery symbols in the form of a ?. The mystery symbols transformed into any of the Win Boost Wheels slot symbols, similar to the popular Luck O the Irish slot, but rarely converted to a winning combination.

After Win Boost Wheels I tried another new one; Gladiator Road to Rome. Another Roman inspired slot, this one based on the famous movie staring Russell Crowe. This slot uses 20 winlines across 5 reels and pays the usual left to right. There are two bonuses, three bonus symbols on reels two, three and four awards a picker style game, and three or more scatters anywhere in view awards a free spins bonus. I only had £46, the balance I carried over from Win Boost Wheels, but it actually spun in what appeared to be the most valuable bonus within £10; the three symbols on reels two, three and four. A grid of nine stone tablets is displayed with three picks. Behind each tablet is either a gold, silver or bronze helmet. I picked two bronze and one silver, awarding a rather pathetic £26. It showed the other values once the bonus was finished, the gold helmets were £100, £140 and 5 free spins, so potentially a very good game, and possibly a rare one to trigger.

The reel wins on the Gladiator Road to Rome slot were all very low values, three 10’s paid only 40p. Bare in mind that I was playing at £2 a spin and there were only 20 winlines.

I played through a further £100 without any form of bonus, and left the slot roughly £150 down. Win Boost Wheels was a good bookies slot, but I doubt I’ll be playing Gladiator Road to Rome again. Most movie inspired/licensed slots are poor quality.